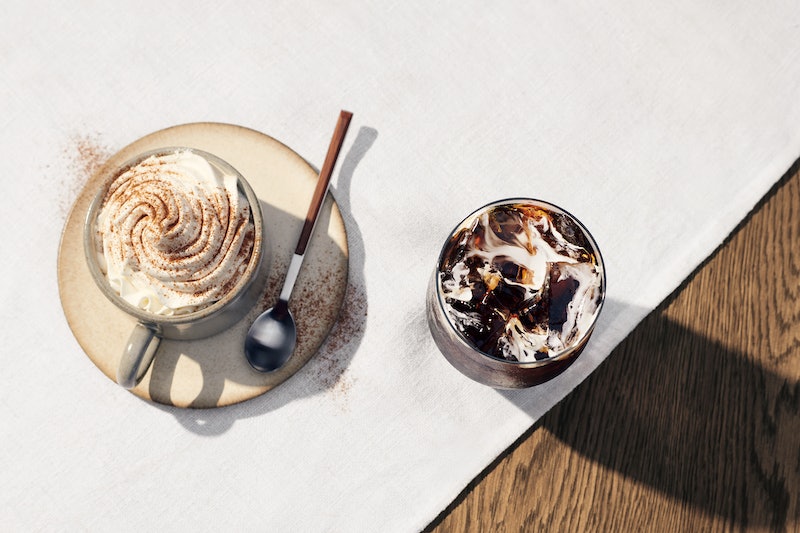 Fall might still be a long way off, but purveyors of cozy coffee drinks and baked goods are ready to get things going. Panera has announced some new fall 2019 menu items, and if you're a fan of the chain, these might make you wish it was 50 degrees instead of 90. (Actually, you might wish that, anyway.)

Panera has revealed four new items — two drinks and two treats — and they all have to do with cinnamon. First, there's Cinnamon Spice Cold Brew, which is cold brew coffee with half and half and cinnamon flavor and served over ice. The other coffee beverage is the Cinnamon Spice Latte, which combines espresso, foamed milk, and cinnamon flavor and is topped with whipped cream and a sprinkle of cinnamon.

As for the baked goods, there's an Apple Pie Thumbprint Cookie and a Cinnamon Apple Scone. Panera has not yet released descriptions for these two (presumably, because it is still the beginning of August), but they're pretty self-explanatory, anyway.

All of the items will start hitting Panera stores nationwide during the week of Monday, September 9.

Until then, Panera does have some other cinnamon items available. In the pastry section of its menu, there's Cinnamon Crumb Coffee Cake ("An old-fashioned butter coffee cake, swirled with cinnamon and finished with a butter crumb topping"), a Vanilla Cinnamon Roll ("A freshly baked roll made with our sweet dough, stuffed with cinnamon-sugar filling and topped with decadent vanilla icing"), and a Cinnamon Crunch Scone ("A freshly baked, cream-based scone mixed by hand for a delicate crumb. Made with cinnamon chips and cinnamon crunch icing").

As for a spice-filled drink, there isn't anything on the usual menu that is cinnamon-specific, but the chain does have an Iced Chai Latte that contains cinnamon, as well as vanilla, cardamom, and ginger.

It's still summer for now, though, so if you're not ready to get all cozy with some cinnamon, Panera does still have its summer menu specials. Earlier this year, the restaurant debuted the Summer Strawberry Caprese Salad, which is romaine lettuce and arugula with fresh mozzarella, tomatoes, basil, strawberries, olive oil, salt and pepper, and balsamic glaze. There are also three new frozen blended drinks: Frozen Mocha Cold Brew, Frozen Caramel Cold Brew, and Frozen Strawberry Lemonade.

On top of that, for Panera customers that live in New England, select stores have two lobster dishes through Labor Day weekend. Yep, lobster at Panera. The Lobster Roll includes knuckle and claw lobster meat in a lemon tarragon mayonnaise dressing and is served on a roll with lettuce. The other item is Lobster Mac & Cheese, which is the usual Panera Mac & Cheese topped with buttered knuckle and claw lobster and seasoned breadcrumbs.

So, yeah, if any of these items sound good to you (well, other than the lobster unless you're near one of the special locations), then you might need to get to Panera quick before all that cinnamon stuff arrives. But, if you're counting down the days until fall, you can go forth knowing it'll come a couple weeks early at Panera.