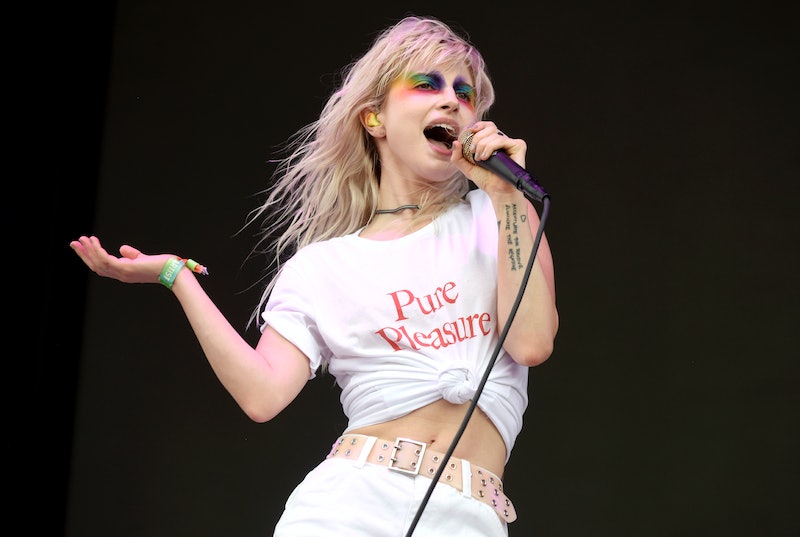 Hayley Williams may have just released her first solo album, but that doesn't mean she's left Paramore behind for good. While speaking about her new release, Petals For Armor, with the NME, Hayley Williams revealed Paramore's next album will be guitar-based and bring the band back to their pop-punk roots.

Though it's not clear when fans can expect new music from the band — all Williams said was that they've "thought about" the new album — she did explain that they wanted it to be a counterpoint to the band's last record, the synth-influenced After Laughter. "It’s a summer/winter thing," she explained. "When it’s winter you can’t wait to be sweating your balls off, and in the summer you’re like, 'F*ck — I hate this!'"

She continued, "After making After Laughter it’s like, 'Okay, we’ve tried this on and it actually fits and feels great. Now lets see what else we can do to f*ck this up.'" Williams also explained that she and her bandmates, Taylor York and Zac Farro, are at the point in their career where they can make whatever they want to make. "That excitement and curiosity that keeps us a band," she said. "We won’t let it happen unless we think it’s the coolest thing in the world, I mean, Paramore’s my favorite band. How dare I ever ruin it?"

Sonically, that means looking back to some of the bands that originally influenced Williams, York, and Farro when they first started making music together. "Taylor’s mentioned things like: 'Oh, God – I miss guitars,'" she recalled, referencing the popularity of electronic influenced music. "We’ve found ourselves listening to a lot of older music that we grew up being inspired by."

Notably not on the list are any of Paramore's contemporaries in the emo scene of the early-to-mid 2000s, as Williams said she's happy to move on from those days. "I can say pretty comfortably in hindsight that I don’t think we ever felt like we fitted [in]," she explained, though she acknowledges that the band's most famous album, Riot!, is their most emo-influenced.

"When I go to Paramore’s Spotify and I look at 'Fans Also Like,' I don’t really relate to any of the artists," Williams continued. "It’s no disrespect. A lot of those people I know, and have grown up with. It’s more like, 'Oh wow, we didn’t listen to anything that sounds like this.'"

Williams is also excited for any future Paramore music to reflect the journey — both musically and emotionally — that she and her bandmates have gone on over the past decade. "It’s very nice to be able to grow up with these guys," she said. "We screwed around for a long time, and we made each other’s lives miserable for a time there, but we make each other better people. I’m pumped."