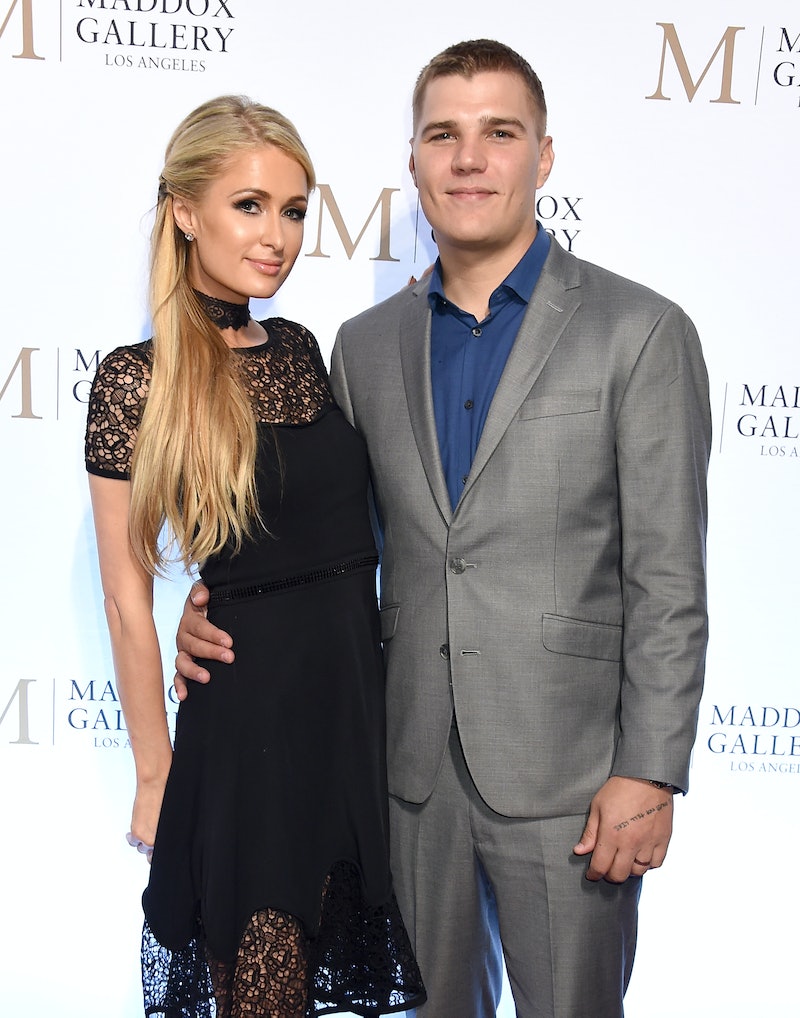 Almost a year after their engagement went public, this celebrity couple is reportedly calling it quits. According to a report from Just Jared, Paris Hilton and Chris Zylka have broken up, ending their engagement after spending two years together. Bustle has reached out to Hilton and Zylka's reps, but did not yet hear back at the time of publication.

The news came from a source claiming to be close to the couple, who said that things between them have reportedly been off since they hit the one year mark, and now, they each plan to focus on their own lives and careers.

“They broke up and called off their engagement earlier this month. Their relationship started to become off-kilter after about two years together. Paris will be focusing on her brand like DJ-ing and fragrances while Chris will get back into acting and art, like his gallery pop-ups with Banksy during Art Basel."

So far, Zylka and Hilton have both remained silent on their reported split, so neither of them have confirmed or denied what's going on in their relationship. The last time Zylka made an appearance on Hilton's Instagram was in late September, when she shared a photo of the two of them together, looking into each other's eyes.

After news that they were dating first broke in 2017, last January, Hilton announced her engagement to Zylka with a post on Twitter, along with a photo of Zylka down on one knee with the ring on a snow covered mountain. She wrote:

"So happy & excited to be engaged to the love of my life. My best friend & soulmate. Perfect for me in every way. So dedicated, loyal, loving & kindhearted. I feel like the luckiest girl in the world! You are my dream come true!"

Then, in August, Hilton revealed that she and Zylka pushed their wedding back to 2019 in an interview with People after they originally planned to tie the knot on November 11, although at the time she didn't talk about whether or not they'd experienced any issues in their relationship that may have led to the postponement. According to what Hilton told the magazine, she was too busy to be able to plan her wedding the way she wanted to, and because she and Zylka were both working too much to stick to the date they'd picked.

She said in the interview:

Since there's no concrete evidence on the current status of Hilton and Zylka's relationships, fans will just have to wait until one of the stars decides to open up about whether or not they decided to split. Ending an engagement isn't an easy decision to make, especially after more than two years together.