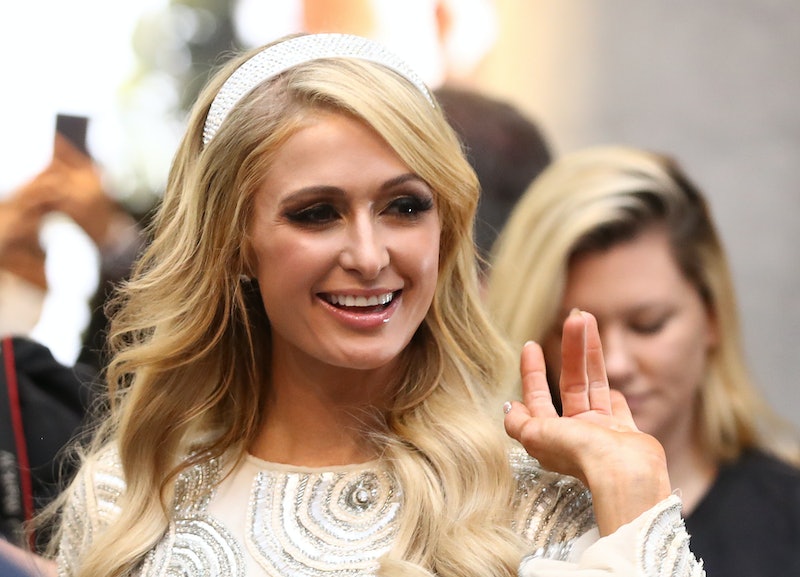 Kim Kardashian's elaborate Christmas party on Monday night had a predictably A-list guest roster. But there was one person at the festivities whom fans might not have been expecting to see on Kim's Instagram story. Paris Hilton attended Kim Kardashian's Christmas party, and the two of them even went sledding together on the fake snow Kim had outside her house.

Kim's husband, Kanye West, shared a video of the momentous occasion on his own Twitter account. "Bff," he captioned the video, which shows Kim informing her friends that she and Paris are going to "go down the sled" together, while Hilton dances in the background. Both of them are grinning from ear to ear in the clip, too.

West's video doesn't include footage of the actual downhill experience, but Kim also shared proof on her Instagram story. The video is zoomed out a bit, but there's footage of her and Paris trudging straight into the snow — heels, party dresses, and all — and proceeding to slide down the hill together. And, honestly, it looks like the two of them are having a blast; Paris has her arms out in a totally carefree gesture as they glide down the hill of imported snow.

Fans didn't miss the iconic moment, and many of them shared how excited they were about the surprise holiday reunion.

As The Simple Life fans will recall, Kim and Paris have a years-long friendship, but it's also a complicated one. Once upon a time, Kim cleaned various celebrities' closets, including Paris's (even though that Simple Life clip of Paris demanding Kim clean her closet is fake). And that's not to mention the time Paris and Nicole Richie suggested Kim was "a ho." So even though Kim and Paris have known each other for years, there's definitely bene some tension between them in the past.

If the sledding video is any indication, though, the two reality stars have let bygones be bygones and have moved on with their lives. They may not be the closest of friends now, but it doesn't look like they're on bad terms either. (And considering the fact that at one point, Kim said "Paris who?" when asked about her former friend, not being on bad terms is an accomplishment in itself.)

Plus, Paris shared the video of her and Kim getting ready to sled together on her own Instagram page, too. So, clearly, the newfound love is mutual.

As for the other celebrities at Kim's star-studded bash, the party guests included Jennifer Lopez and Alex Rodriguez, too. John Legend also performed at the event, complete with backup dancers and everything.

Kim's Christmas party was definitely one for the record books, especially since it gave her and Paris a chance to reconnect. Seeing the two of them together again was an unexpected holiday treat for fans. It's great to see that the two of them really have buried the hatchet (for now, anyway). And if 2019 brings even more get-togethers for them, that's even better.