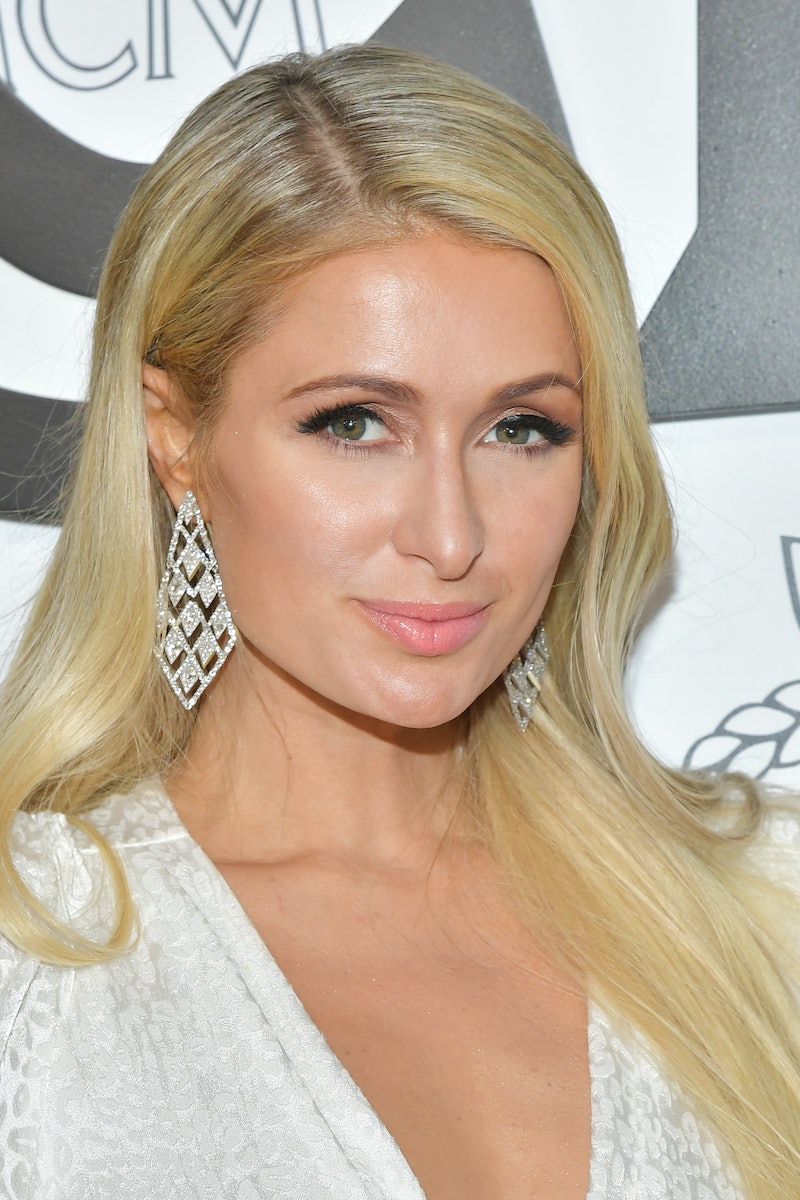 Paris Hilton is the poster child for the early noughties, where her silk mini dresses, wrap-around shades, and body glittered shoulders caught the essence of the new millennium. But it's not like the heiress just left the early 2000s in the past. Paris Hilton rocked crystal eyebrows recently, and it looked straight out of a 2000's Delia's catalog.

Back in the early 2000s — when The O.C. was on air and Kim Kardashian was a B-level sidekick — Hilton reigned the red carpet. Everyone wanted to know what kind of ruffled mini skirt she was wearing, and what shade of glitter lip gloss she was rocking. Things have changed since then, but Hilton's beauty looks often have a nod back to that era. And seeing how fashion is now moving on from the '90s and embracing the noughties (here's looking at you, baguette bags,) Hilton is back on-trend.

Her most recent beauty look consisted of a pair of arched crystal eyebrows. Hilton wore the rhinestone brows to the Electric Daisy Carnival in Las Vegas on May 18. The electronic dance music festival invites colorful and trippy outfits, and Hilton more than delivered. In addition to tutu skirts, butterfly shaped tops, and an array of wild sunglasses, Hilton also rocked the shimmery brows.

In this particular look, Hilton looked like a space fairy. Her outfit consisted of a black and pearl seashell bra, complete with hanging chains. Her skirt had a cosmos print on it, which was peppered with stars and moons. To top off the outfit, she had a black sheer robe and a turquoise and silver tiara. To bring the whole galactic-mermaid vibe together, Hilton created faux crystal eyebrows above her sunglasses.

Since her trademark oversized glasses hid her real eyebrows, Hilton created a dual-arch look. Hilton added the rhinestone brows above her real ones, having them nearly reach her hairline. The brows had a deep arch, taking on a surprised shape.

The rhinestones that Hilton used vary in shape and size, creating a pretty visual effect. You can easily copy Hilton when going to one of your own festivals this summer, adding a crystal touch to your summer outfit.

While crystal stick-on jewelry is a staple in many festival looks, the rhinestone heavy look is also a nostalgic throwback to the early 2000s. The first iconic look that comes to mind is Drew Barrymore's makeup in the iconic movie, Ever After. That look was like the mother of all crystal-makeup looks after.

There was plenty of crystal-heavy makeup on red carpets, too. One of the most famous looks was Gwen Stefani's rhinestone eyebrows.

Then there was Christina Aguilera in 2001, where she wore a rhinestone cat eye to the MTV Movie Awards. It might not have been eyebrows accented with crystals, but the look was the same.

Mandy Moore was also a supporter of the gemstone makeup craze, where she wore her crystals in her zig-zag center part.

Take a page out of Hilton's beauty book and bring back rhinestone makeup this summer.