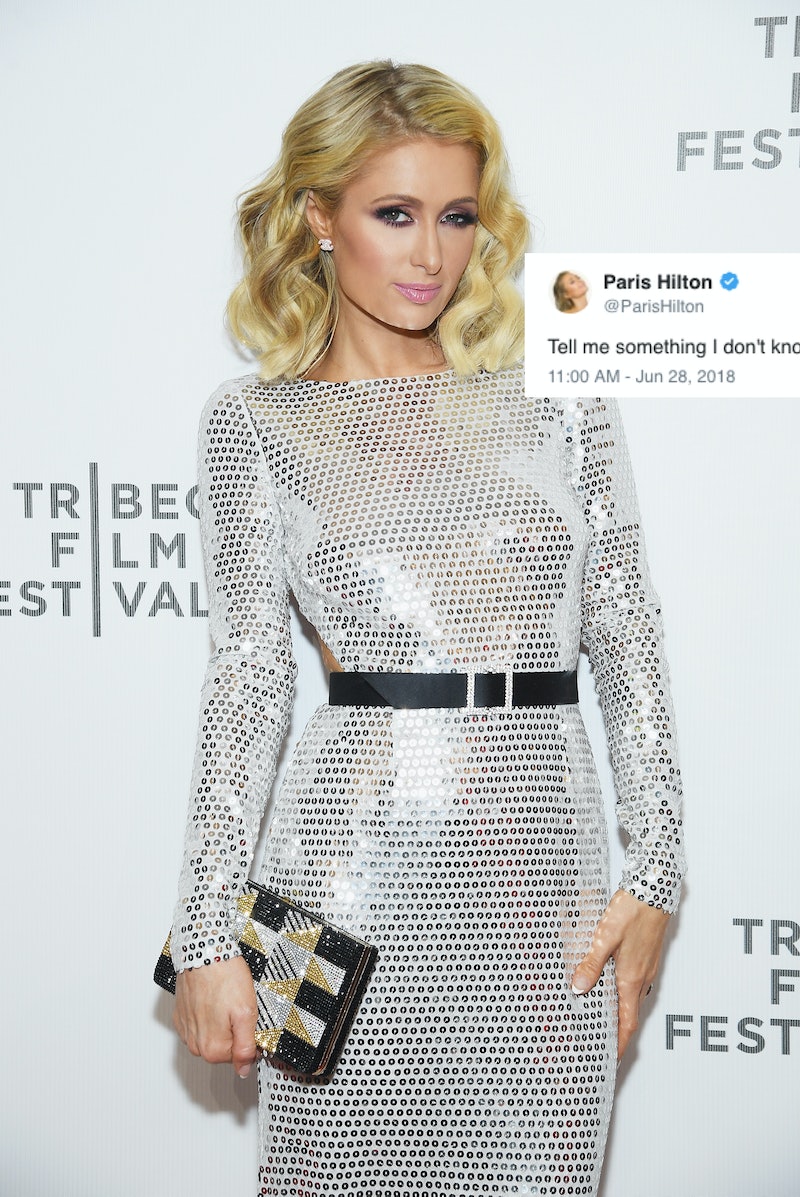 Sometimes, the caption on a photo shared on Twitter is just a caption, but others, it's an invitation to start a truly incredible (and educational) meme. Over the weekend, Paris Hilton's "tell me something I don't know" meme took social media by storm, and not only have more 11,000 people responded to her original post, but even celebrities like Tyra Banks are jumping on the bandwagon.

If you're out of the loop, prepare to be introduced to your new favorite thing on the internet. Basically, this whole thing started last Thursday, when Hilton posted a photo of herself wearing a fur coat with an expression on her face that made it look like she was lost in thought. "Tell me something I don't know," she tweeted alongside the photo.

This could have easily just been a tweet that Hilton posted and then everyone forgot about, but instead, it's now legendary. Her followers took her request very seriously, and before long, people started replying with actual facts that they're assuming that Hilton (and to be honest, most other people) wouldn't already know. It doesn't seem like she was expecting this, but isn't that how all the best memes are born?

There are already so many amazing responses to Hilton's tweet, ranging from funny to actually very interesting. And even though this totally could have gone haywire, a lot of the tweets have actually inspired a few wholesome exchanges from people who are happy to learn.

If Hilton's career had started when Twitter, Instagram, and Snapchat existed, chances are she would have been way more famous than she was during the time of The Simple Life. Good point, Banks.

This Fact About Welshpool, A Town In Wales

Good to know, for those of us in the United States who probably wouldn't have ever known this town existed.

These Beautiful Facts About Minnesota

This Interesting Fact About The Night Sky

Could you imagine the night sky being brighter than the sky during the day? It's hard to even think about what that might look like, but it's good to know that we have interstellar gas to thank for the darkness that allows us to sleep and cool off at night.

One Of The Most Perfect Responses To This Tweet

Considering how many people that Hilton must meet, there's a good chance that meeting a certain fan in particular would be something she didn't know. Well played, Jesse Heiman.

It may have happened over 30 years ago, but that sounds really painful. Hope Jonesy's OK.

This Tweet That Took Full Advantage Of The Meme

Hilton may have already known these facts, but they're important to share — not just with her, but with anyone who might have been reading all the replies.

Um, did anyone really need to know this? That's very upsetting.

A Fact That All Of Us Probably Did Know

Anyone who has been to a middle school science class knows this one.

For the record, it does work.

OK, so most ballerinas have to train their whole life, but it's never too late to take a beginner's dance class, right? All may not be lost, Ice Blue Scoop.

As all good memes do, this one proves that it's not really the hilarious meme that matters most — it's the friends you make along the way. Hilton, next time you want to start another conversation like this one, the world is ready. Have we ever been more willing to share interesting facts with each other as a society? Hilton did that. She should be proud.

More like this
Confusion Reigns After Kanye Changes His Instagram Profile Pic To Kris Jenner
By Jake Viswanath
The Try Guys Cheating Scandal, Explained
By Grace Wehniainen
Dixie D’Amelio & Noah Beck “Love Each Other” Despite Breakup Rumors
By Julia Emmanuele, Jordyn Tilchen and Grace Wehniainen
The Real Reason Russell Brand Decided To Quit YouTube
By Sam Ramsden
Get Even More From Bustle — Sign Up For The Newsletter