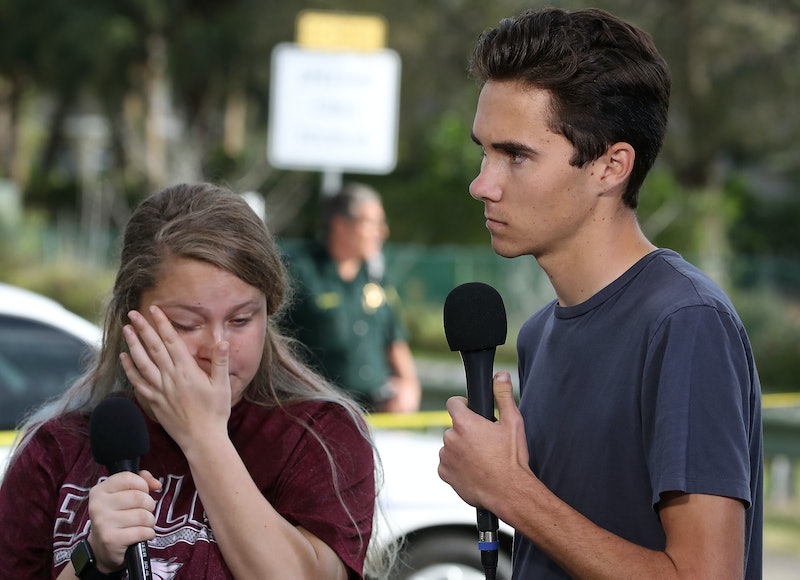 Seventeen students at Marjory Stoneman Douglas High School were killed last week when a gunman stormed the building and open fire. The massacre reignited the popular debate over gun control, with proponents and opponents of stricter firearm laws going at it on social media on television. In a depressing but sadly unsurprising development, conspiracy theorists think the Parkland shooting survivors are actually "crisis actors" — paid political operatives who falsely present themselves as survivors of an attack in order to whip up public fervor for one policy or another.

The conspiracy theories have taken many forms, but most have fixated on David Hogg, a 17-year-old Stoneman Douglas student who took several media interviews after the shooting. Right-wing, pro-Trump blogs like Gateway Pundit, InfoWars and True Pundit all published articles either implicitly or explicitly suggesting that Hogg is an actor attempting to stir up anti-gun sentiment by falsely representing himself as a traumatized survivor of a school shooting.

It's not just blogs, either. An aide to a Republican lawmaker told the Tampa Bay Times that Hogg and another survivor "are not students here but actors that travel to various crisis when they happen," a comment that got him fired. Donald Trump Jr. liked a tweet suggesting that Hogg was in fact working for the FBI (Hogg's father is a retired FBI agent).

The claims about Hogg were promptly and easily debunked, because they're not true. Nevertheless, they spread like wildfire: One Facebook post that accused Hogg of being "a CRISIS ACTOR" was shared over 11,000 people before it was deleted. At one point, the number one trending video on YouTube claimed that Hogg was a crisis actor.

Conspiracy theorists presented several pieces of evidence in an attempt to cast doubt on Hogg.

Many suggested that he isn't a high school student at all, and in fact graduated from a California high school in 2015. In a tweet that was shared over 5,000 times, a hoaxer posted a yearbook photo of Hogg and what was supposedly his Classmates.com profile.

"I went to school with him at Redondo Shores High School in California and he graduated in 2015," the user wrote. "Here he is in our yearbook from 2015." This was exposed as a lie when it was noted that another student in the yearbook photo was wearing Stoneman Douglas T-shirt, and additionally, that the Classmates.com profile — which has since been deleted — was created on Tuesday.

Others claimed that Hogg is actually a 26-year-old criminal from South Carolina, the evidence being an unverified mugshot of a man named David Guyton Hogg who was supposedly arrested on drug charges in 2016. That man bore no physical resemblance to the real Hogg, however, and the mugshot listed his eye color as blue, whereas Hogg's eyes are brown.

One of the more popular conspiracy theories surrounding Hogg focused on B-roll footage from an interview he gave after the shooting. Infowars said the video "appears to show Hogg being walked through rehearsed lines," while True Pundit said that Hogg seemed to be giving a "scripted response" to the reporter's questions. It's true that, on several occasions in the interview, Hogg interrupted himself mid-sentence and started over to articulate his thoughts more clearly; this may have been because he was shaken, having just witnessed a school shooting.

These theories may seem bizarre, but they make a degree of sense in context. For one, it's very common for conspiracy theorists to claim that school shootings are actually "false flag" events — fake crises perpetuated by the U.S. government in an attempt to scare the public into submission. The basic structure of the Parkland shooting conspiracy theories is nothing new.

Moreover, it's worth noting that Hogg is vocally anti-Trump, and many of those spreading the conspiracy theories about him — namely Gateway Pundit, True Pundit and Infowars — are unabashedly pro-Trump. It's telling that True Pundit, which accused Hogg of "rehears[ing] scripted responses" in his interviews, also referred to him as an "anti-Trump FBI Brat" in its headline (Hogg's father once worked for the FBI), despite the fact that neither the shooting or the conspiracy theory have anything to do with President Trump.

Hogg, for his part, denies the conspiracy theories.

"I'm not a crisis actor," Hogg told Anderson Cooper on CNN Tuesday. "I'm someone who had to witness this and live through this and I continue to be having to do that. I'm not acting on anybody's behalf."