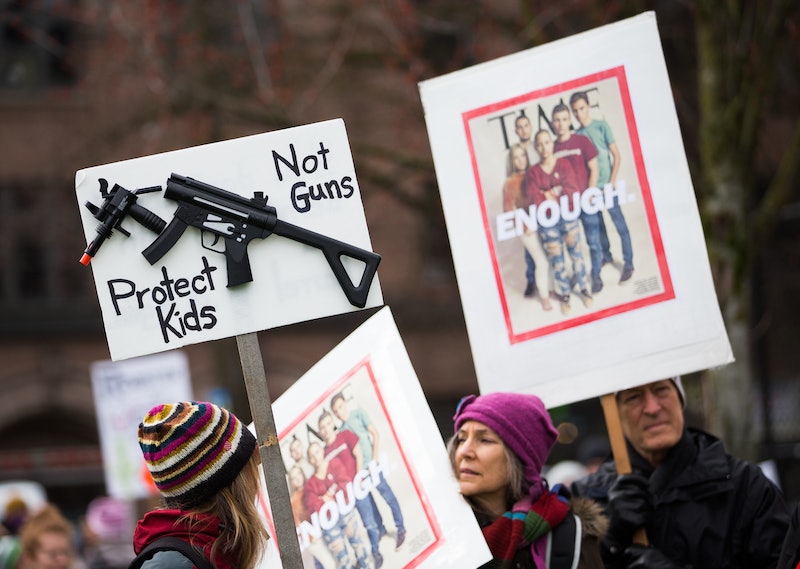 It's been nearly two months since the mass shooting in Parkland, Florida, that gripped the nation and ignited a new debate about gun control. But even though the teenage students at Marjory Stoneman Douglas High School have been thrust into the spotlight, they're still attending school and walking through the hallways where 17 students and teachers were killed on Feb. 14, and dozens more injured. To help alleviate the fear that students may face, the school is requiring every student to carry a see-through backpack, a move that has been met with controversy. Some of the Parkland survivors are using their clear backpacks to make a point about period stigma, and it's going viral for good reasons.

Students have been vocal about their dislike of the new backpacks — one student called them an "illusion of security" while others have used them to protest Florida Senator Marco Rubio, who has received millions of dollars from the National Rifle Association. But by filling the clear backpacks with feminine hygiene products, as Stoneman Douglas student, survivor, and activist Cameron Kasky did, students are using the bags to reduce the stigma surrounding periods. I remember the humiliation I felt if I started my period unexpectedly and had to whisper to classmates asking for a pad. I eventually started going to the nurse's office instead of telling people I was menstruating. But if these kids are any indication, things are changing quickly.

It can be easy for adults to dismiss period stigma as silliness — I've been out of high school for seven years and don't hesitate to talk about my period or needing a tampon — but when I was in the eighth grade, I noticed I had a bloodstain on my skirt thanks to my period, and I was so embarrassed, I cried. At 17 years old, I didn't know much about period stigma, which is why it's remarkable that high school students have the maturity to realize they can use their voices and backpacks to make a point about periods, on top of their advocacy for gun control. It's also oddly endearing that male students are leading the conversation and easing the pressure their female classmates may feel. Student and shooting survivor Sarah Stricker wrote, "Yass Cameron [...] if only I had the confidence to do that."

Kasky had earlier said on Twitter he didn't see the point of the bags. "Unless they’re bullet-proof, I don’t feel much safer," he wrote. But displaying feminine hygiene products is the perfect form of protest: The students are able to voice their disagreement with the clear backpack rule and make a point about women's health.

Tampons and pads are expensive, but less than half of men say access to feminine hygiene products is a right, not a privilege. According to HuffPost, the average woman will spend over $2,000 during their lifetime on pads and tampons, and that's not counting expenses like heating pads, birth control and acne treatment. Even though I sometimes feel gross on my period, periods aren't inherently disgusting, and it's important to make the distinction. Billions of people around the world have periods, which is why it's a good idea to talk about how we cope with the side effects. We clearly have work to do when it comes to period acceptance and normalization in the U.S., but these students are showing us how simple it is to make people think about period stigma. It started with gun control, but students have made powerful statements about media representation and now period stigma — it's clear that these kids are smarter and more sensitive to current events than some adults.

More like this
I Tried TikTok’s Favorite Menstrual Cup & Here Are My Honest Thoughts
By Meguire Hennes
On TikTok, #SeñoraEra Shows Latinx Users Becoming Their Mothers
By Natalia Perez-Gonzalez
12 Cheeky Instagram Captions To Use When You Haven’t Posted In Weeks
By Emma Carey
The “Teenage Dirtbag” Trend Is TikTok's Latest Nostalgic Obsession
By Meguire Hennes
Get Even More From Bustle — Sign Up For The Newsletter