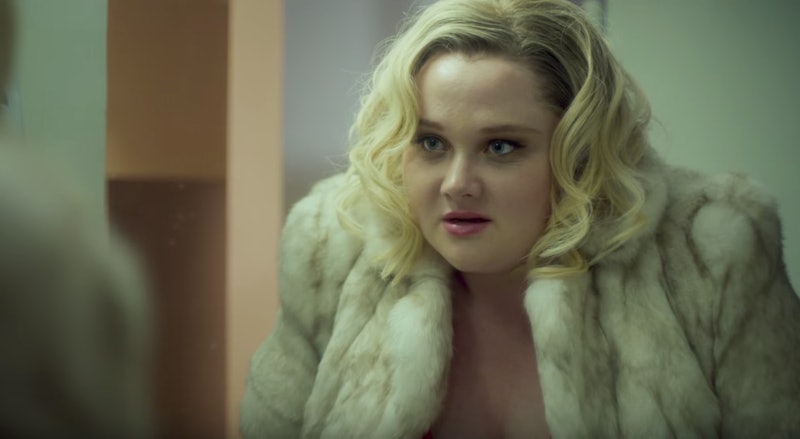 When I was growing up, I was always told to dream big, but it was tough for me, a plus-size woman, to find other plus-size women as role models who were succeeding in achieving their dreams. On-screen, it was hardly different; looking for positive body representation in film and TV shows, I often came away with nothing. But after seeing the new movie Patti Cake$, I've finally found a plus-size movie character who isn't a punchline, but rather, an inspiring body-positive hero who stands out from all of her peers.

Often, both on-screen and off-, a woman's weight is weaponized against her to depict her fatness as a failure in her character. Patti's weight in the film, however, is just a footnote in her development as a person. In other movies, men are often physically repulsed by plus-size women (Shallow Hal, for example) or women pick on other women for being overweight (like in Heathers or Mean Girls), all in an attempt to make plus-size people punching bags for their amusement. The plus-size people themselves, though, rarely get the chance to have fully-realized personalities or story arcs.

But not in Patti Cake$. In this movie, out now, the viewer actually gets to delve into Patti's mind, that of a young woman who desperately wants to be a rapper despite others feeling like she is destined to live a small-town, minimum-wage existence. To focus on her inner life and her dreams of massive fame, rather than her appearance or abilities in the minds of others, makes Patti a person, not a joke. It's a refreshing change of pace, even if it's a singularity in the world of film.

Patti Cake$ actively frees Patti from the burden of being a bigger woman in a world where being that size is considered a flaw. The film treats any gross nickname or fat-shaming jab aimed at her as something to be shot down immediately. When a tertiary character drives by Pati as she's walking down the street and calls her "Dumbo," she gives him the death stare. While engaged in a rap battle with a guy she's crushing on and who weaponizes her weight against her, she not only brushes it off, but spins her appearance into body-positive rhymes.

Patti gets to flip expectations even further in her pursuit of rap stardom. In a male-dominated industry where women are often objectified or pushed aside, Patti is an anomaly. Not because of her size, but because she is a woman spitting better rap bars than the other wannabes in her orbit, and she doesn't apologize for this. She's unshaken when the men who feel entitled to fame attempt to blindside her, tell her she's not an artist, or tear her down with a degrading remark about her looks. Whenever this happens, you can see her resolve to push forward only strengthen. The male rappers of the world don't get to steal her shine with some entitled nonsense; it's Patti who calls the shots on her success.

Unlike so many plus-size characters unfairly written to feel insecure or ashamed, Patti is completely confident in her looks. She not only stomps out the incoming negativity about her weight, but she also actively practices self-love. In the first moments of the film, she freestyles as she brushes her teeth and then finishes the routine by looking in the mirror and saying, "You're a boss bitch." When her mom tries to chip away at Patti's self-worth, Patti tells her that she's amazing and doesn't take the criticisms to heart.

Over and over again, Patti spits raps lyrics that indicate she sees herself as a powerful, interesting, sexually-empowered woman. Why wouldn't everyone else love her, when she radiates self-love? Sure, she gets some hate, but she doesn't waste time feeling bad about herself or worrying about her weight. She has no interest with being a punchline or a sob story, just the heroine of her own narrative.

Even though I'm a grown woman, just watching Patti go forth boldly and not let the BS hold her back makes me feel like a kid again, that anything I want is possible and I should never let another person's perception of who I am define me. I'm hopeful that Patti Cake$ helps push a more visible trend of body-positive, plus-size protagonists on-screen soon, something that star Danielle MacDonald said herself in an interview with HelloGiggles: "I think that people want to feel represented. Honestly, I think that when we watch TV and film, we want to see stories that you can relate to, that bring emotions out of us. And a lot of the time, it’s a story that you would never really expect."

Through its barrier-breaking heroine, Patti Cake$ quietly revolutionizes how we watch and process plus-size women onscreen. Let's get more women like Patti in movies ASAP, please.

More like this
'Girls Trip 2' Will See Our Fab Four Enjoy An International Adventure
By Maxine Harrison
Bennifer's Relationship Timeline Now Includes A Grammy Date Night
By Jake Viswanath
What Is Mary J. Blige’s Net Worth? The 9-Time Grammy Winner Is Doing “Just Fine”
By Hugh McIntyre
Taylor Lautner Copped To Finding Jacob "A Little Annoying" In Twilight
By Stephanie Topacio Long
Get Even More From Bustle — Sign Up For The Newsletter
From hair trends to relationship advice, our daily newsletter has everything you need to sound like a person who’s on TikTok, even if you aren’t.