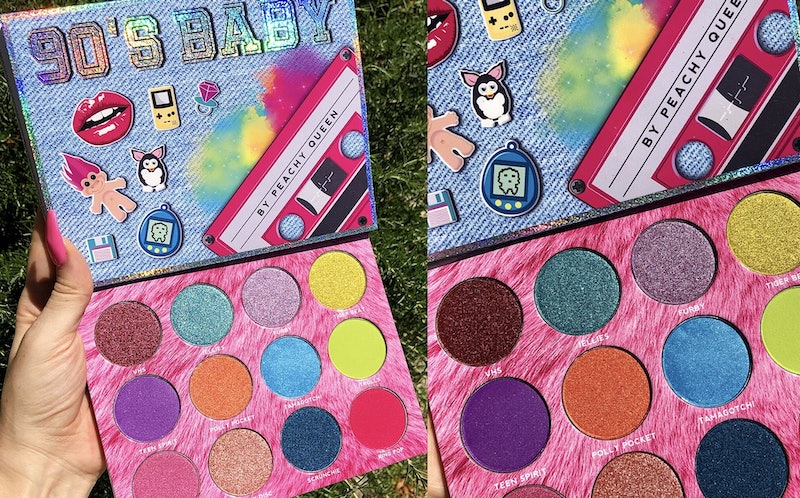 The '90s have had a major comeback these last couple of years, bringing our childhoods into sharp focus. And one beauty brand is about to take it one step further, creating the ultimate nostalgic palette. Peachy Queen's 90's Baby Palette is going to throw you right back into grade school while simultaneously giving you grown up makeup looks.

Peachy Queen announced that the palette will be available starting April 29, infusing your spring beauty looks with a loud punch of color. The palette is a mix of childhood memories, picking up on toys, accessories, and electronics that were part of your day-to-day life in the '90s.

"Are you a 90’s Baby? Here’s how you’ll know!" the palette's product description reads. "Did you forget to feed your tamagotchi? Anyone ever tell you to talk to the hand? Where you Ashley or Mary Kate? Get all nostalgic with this 90’s Baby Palette with shades like VHS, Scrunchie, Trolls, Ring Pop."

If you're getting flashbacks to your purple room in third grade, where the furniture had stickers and the popcorn ceiling had glow-in-the-dark stars, then just wait. There's more. The palette consists of 12 shades that vary across neon to pastel.

The shadows are matte, shimmer, and diamond shimmer, and all of them look like they're pulled from a "'90s glossy mag," according to the brand. The shades come boxed in a palette that looks like a time capsule. "90's Baby" is written in holographic letters in a letterman text across the flap. The font looks just like the sassy slogan T-shirt fonts from the '90s, where the shirts read things like "99 Percent Angel."

The top half of the palette has a denim background, which is decorated with patches and a hot pink cassette. The bottom half of the palette is covered in a furry pink print. The texture will make you think back to the furry pom pom pens and fuzzy binders that were so popular during that time.

The colors are equally as nostalgic. In the first row, the first color is called VHS and is a glittery rust hue. Then you have a glitter-packed teal shade called Jellies that looks just like gel pen ink. A glittery purple is called Furby, and a glittery gold is named Tiger Beat.

In the second row, a sparkly purple is dubbed Teen Spirit, which is followed by a pumpkin orange with gold flecks, which is called Polly Pocket. A sparkly sky blue hue is Tamagotchi, and a neon yellow is dubbed Trolls.

In the third and final row, the first shadow is called Caboodle and is a sparkly rose hue. That is followed by a rose gold glitter shade called Floppy Disc, a glittery midnight blue hue named Scrunchie, and a matte pink dubbed Ring Pop.

The palette clocks in at $34.95, and is already available to pre-order on Peachy Queen's website. If you want to infuse your spring beauty looks with a touch of the '90s, you can't go wrong with the 90's Baby Palette in your arsenal.