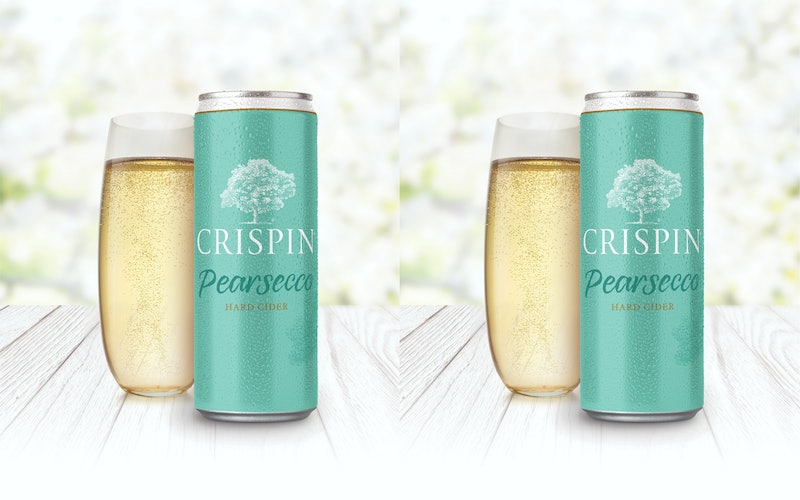 It may feel like it's been so long since the sun touched your skin that you are alarmingly close to making your relationship with your light therapy alarm clock Instagram official, but good news, y'all: spring is about to get sprung. At the very least, it is in the land of alcoholic drinks, where Crispin Cider Co. just released Pearsecco in a can. What is Pearsecco, you ask? Gather round, my fellow cider stans, because it basically just took everything that is good about summer and shoved it into one majestically Instagrammable drink.

Pearsecco, despite being a catchy combo of pears and prosecco, is actually a cider — per Crispin, it is a "marriage of a pear-based cider and a bubbly prosecco flavor." Bustle had the opportunity to sample the drink before its introduction to shelves on March 1, and it is everything the made-up word "Pearsecco" promises and more. The pear taste is distinct, but the dryness of it makes it so subtle that it's almost floral. It's the perfect drink for people who love the first few sips of a sweet drink, but get burnt out by it in the middle — Pearsecco, on the other hand, is just sweet enough to snag your taste buds' attention, but not so sweet that it overwhelms.

Crispin's Pearsecco will first be available in a wine-inspired variety pack of 12-ounce slim cans that includes Crispin Rosé and Crispin Brut, and then, come April, will be available in a standalone six-pack. Regardless of how you buy it, though, you are getting an aesthetic.

If anyone is poised and ready to put something as bold as ~Pearsecco~ in the world, it's Crispin; the brand's Pacific Pear Hard Cider already made a splash in the cider world. That said, you might know Crispin best from its extremely delicious and ridiculously Instagrammable bottles of rosé cider, which came out in 2017 and became one of 2018's most buzzed about drinks.

“The release of Crispin Rosé was our first venture into wine-inspired ciders at the forefront of the rosé trend last year,” said Danielle Rappoport, director of Ciders, Mexican Imports and Flavored Malt Beverages, in a press release provided to Bustle. “Both prosecco and pear-inspired beverages have seen strong growth in recent years. With the new Pearsecco flavor, we are continuing to appeal to cider and wine drinkers alike with yet another rendition of our fresh and modern take on cider.”

For anyone keeping track of the Gregorian calendar as desperately as I am right now, the official start of spring is on March 20; that being said, with the variety pack hitting shelves soon, you'll get to cheat the fates by taking your Pearsecco out on the town earlier. Until it hits shelves on March 1, though, you still have access to all of Crispin's other refreshing takes on cider, which include flavors like Blackberry Pear, Honey Crisp, and Pacific Pear, all of which should make the wait for Pearsecco a little less .... un-pear-able.

More like this
On TikTok, Tinned Fish Date Night Is The Latest Viral Food Obsession
By Emma Carey
10 Pumpkin Recipes That Are Way More Creative Than Pie & Lattes
By Rebecca Deczynski and Alexis Morillo
Read The First Pages Of Emma Rosenblum’s Highly Anticipated Debut, 'Bad Summer People'
By Samantha Leach
This Tarot Card Means It's Time To Reach Your Magical Potential
By Brittany Beringer
Get Even More From Bustle — Sign Up For The Newsletter