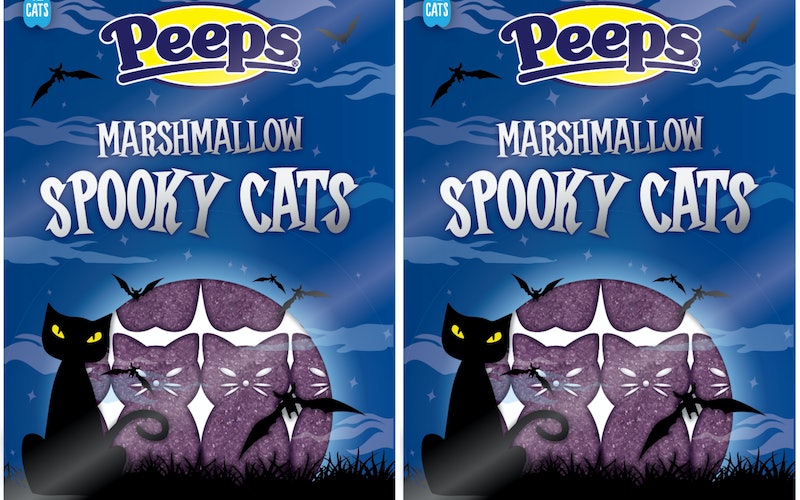 The Halloween candy brigade cannot be stopped. As soon as summer is in full swing, people start looking forward and beyond — to the season of autumn leaves and candy-induced comas. But this may be the most exciting Halloween news of all — new Halloween Marshmallow Peeps for 2019 have been announced and they'll be having you doing the Mash. That's right — the Monster Mash.

Peeps announced the four Halloween shapes we can be expecting this fall, including Marshmallow Spooky Cats, Marshmallow Monsters (which I can only assume are called that because Frankenstein is trademarked), Marshmallow Pumpkins, and Marshmallow Ghosts. Those are four very delicious options in those simple, gooey designs you expect from Peeps. You might remember the Halloween Peeps from days of yore (those pumpkins are a classic), but this whole gang looks pretty incredible.

You can expect these to start rolling out as seasonal products start hitting grocery stores in late summer or early fall, so if you're impatient, you won't have too long to wait — these days even with slightest hint of summer being behind us we can count on stores getting out their Halloween candy in a flash.

If you aren't ready to wait until fall for some autumnal treats, then fear not — it turns out you can buy some seasonal treats year-round. Captain Morgan Jack-O-Blast Pumpkin Spice Rum is actually online, like... right now. Like you can just find it. Now. In the middle of summer.

But if you like to quiver with anticipation, then it's time to start to get excited about some other Halloween-only delights. Pumpkin Pie Kit Kats, in all of their cinnamon, spicy glory, are returning for Halloween this year, which is excellent news for those who want a break from the PSL and for other fall flavors to get a chance to shine once in a while. And apparently, M&Ms' Creepy Cocoa Crisp, designed for Halloween, are already starting to hit shelves if you keep your eyes peeled. Fingers crossed that they bring back the White Pumpkin Pie flavor, which I still haven't — and will never — get over.

Peeps aren't everyone's favorite treat because... well, because there's essentially chewy sugar air with food coloring. I mean, I'm pretty sure that's all they are. But they are a classic — and their Halloween game is just as strong as their Easter one, even without the iconic yellow chick making an appearance. So stay on the lookout, because you have four Halloween Peeps options heading your way. Spooky? No way. But delicious? Absolutely.