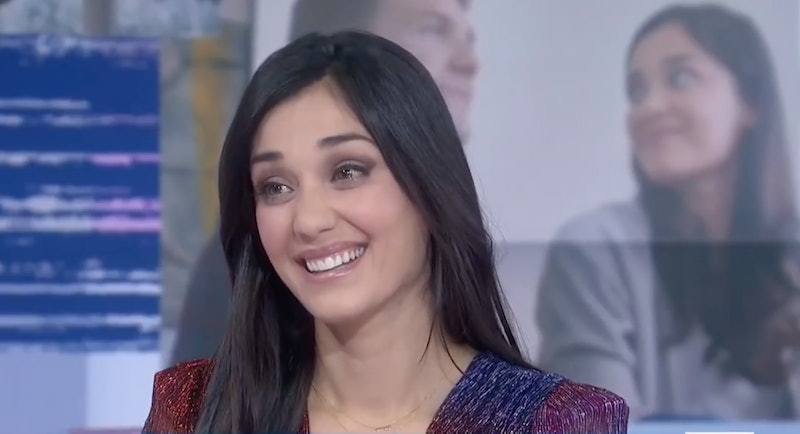 Were you worried about the poor actor in the controversial Peloton ad who had to pretend that she was very happy with her gift of an at-home exercise bike? You're not alone. Actor Monica Ruiz, now commonly known as the Peloton wife, spoke out publicly for the first time since the ad went viral, in an interview on TODAY that aired on Thursday, Dec. 12. And she wants you to know that she's perfectly fine.

In the commercial, Ruiz played a mother and wife who receives a Peloton bike as a Christmas gift from her husband. The character embarks on a year-long fitness journey, documenting every ride she takes, and eventually creating a montage video as a thank you to her husband. The ad received major backlash, with many interpreting it as a thin woman's spouse pushing her to lose weight. Some called it sexist and demeaning, while others just thought the ad was plain bad.

Regardless, Ruiz has her own explanation for the outcry, attributing it to her worried facial expressions. "Honestly, I think it was just my face,'' Ruiz told TODAY. "People were like, 'You look scared.' I'm telling you, it was my face, that was the problem, and it just exploded it from there."

Despite the backlash, Peloton is standing by the ad. In a statement to CNBC, the company said that they were "disappointed in how some have misinterpreted this commercial" and said they were touched by people who said they understood "what we were trying to communicate."

During her first major interview since the ad premiered, Ruiz explained that she initially hadn't planned to talk about the controversy or do any press, but felt compelled to speak out after news outlets had published older interviews. Most importantly, however, she wanted let the public know that's she totally alright. "I just wanted to let everyone know I'm fine," she said. "I'm OK, I'm not in a rehab for mental health anywhere."

Ruiz also made it clear that she was fine when she appeared in an ad for Ryan Reynolds' gin company Aviation Gin, which and slyly made fun of the backlash. In the ad, Ruiz toasts to "new beginnings" with her friends and washes down a glass of gin very quickly. While Peloton is not mentioned in the ad, Reynolds poked fun at the company when he tweeted the ad, writing, "Exercise bike not included."

In a totally full circle moment, Reynolds surprised Ruiz and came out during the interview to meet her in person for the first time. And, while she seemed to be enjoying the opportunity, the actor made one thing very clear: she doesn't want to be known as just the Peloton wife. "I hope people can see me as an actress," she said. "I like to do movies and TV, and I’m not actuality the Peloton lady. Let me work other jobs." Here's hoping those jobs don't also involve exercise bikes.

More like this
Who Is Allison Williams Dating After Her Divorce? She’s Engaged With A Child
By Jake Viswanath
'The Queen’s Gambit' Season 2 Tweet Wasn’t From Anya Taylor-Joy
By Mary Kate McGrath, Jack Irvin and Grace Wehniainen
Rachel Fuda Gave Birth Just Weeks Before 'RHONJ' Season 13
By Brad Witter
Everything To Know About 'And Just Like That...' Season 2
By Jack Irvin and Grace Wehniainen
Get Even More From Bustle — Sign Up For The Newsletter
From hair trends to relationship advice, our daily newsletter has everything you need to sound like a person who’s on TikTok, even if you aren’t.