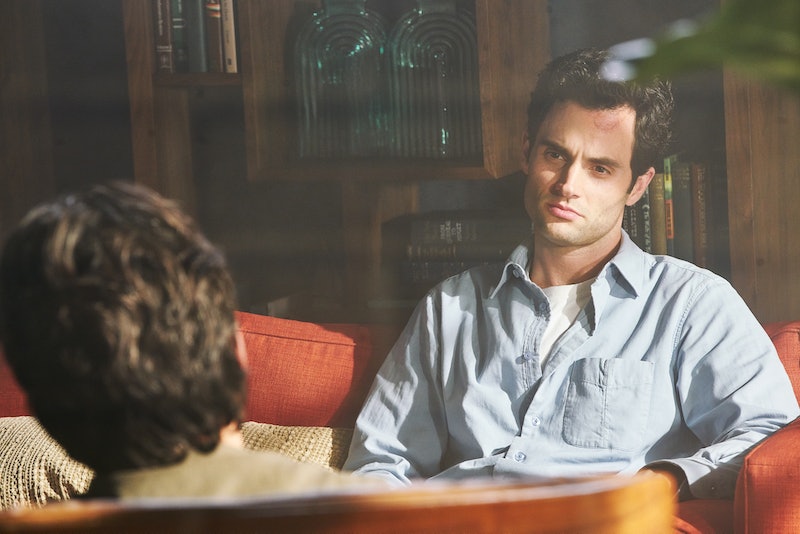 It is nice to be seen, but Penn Badgley is worried fans might not be seeing his You character for who he really is. Specifically, Badgley wants you to stop romanticizing his You character Joe, who's been miscast as a heartthrob by some when in actuality he's a violent stalker who's cast himself as a white knight. The fact that people have gotten Joe so wrong seems to be why Badgley has turned his Twitter timeline into a PSA for fans who think Joe is the guy of their dreams. Spoiler: he really, really isn't.

You premiered on Lifetime back in September, but only now that it's streaming on Netflix does the thriller based on the novel by Caroline Kepnes seem to be catching on with fans. In fact, check out all the Twitter chatter and you might think You is everyone's favorite new show. Some of the conversation surrounding the show, though, is seriously concerning as one fan named @darrenglitz pointed out on Twitter. "The amount of people romanticizing @PennBadgley’s character in YOU scares me," they wrote on Jan. 9.

Badgley agreed with this assessment. "Ditto," he responded. "It will be all the motivation I need for season 2," which will move to Netflix. But, he was also motivated to reach out to those fans who were pledging their love to Joe urging them to rethink their dangerous crush.

There was the fan who asked him to kidnap them: "No thx," he wrote. When someone wrote, "Okay but @PennBadgley was sexy as Dan but lord Joe is a whole new level," he was quick to fill in his own blank there. "...of problems, right?"

And when another person tweeted, "Said this already but @PennBadgley is breaking my heart once again as Joe. What is it about him?" Badgley was quick with a reply that also acted as a bit of a spoiler. "A: He is a murderer," he wrote.

Badgley hoped that would clarify things for people who didn't want to believe that the actor formerly known as Dan Humphrey could play someone so monstrous. Unfortunately, his plan to convince fans that Joe is the literal worst didn't seem to work out exactly as he planned.

He had a frustrating back and forth with a fan who tweeted that they "can do nothing" if he's a "hot murderer." "Then we got nothing left," he wrote rather dejectedly. “'Thanks 2019 but we’ll take the check plz' - Humanity."

Don't worry, though, there was one tweet that made him think that humanity hadn't completely lost it. After watching You, a Twitter user named @wattuplauren wrote, "Ive never trusted anyone less than @PennBadgley," to which Badgley replied with a crying laughing emoji, "My favorite feedback so far."

In an interview with Vulture from back in September, Badgley talked about his initial concern in taking the You role. He said:

"As compelled and interested as I am by the project as a whole and the character, I don’t like it I don’t think anyone can comfortably say, Yeah, I like that guy. It becomes more and more complicated, especially being the person who has to embody him. There’s no way around it — Joe’s not a great person."

So the fact that some people are trying to paint Joe as anything more than a terrible person has been disheartening for the actor. In an interview with E! he talked about how people tend to romanticize dangerous men.

Personally, Badgley said he was "troubled" by the role. "I understood the appeal, but I was really ambivalent. I was really troubled," he said, "and that was also what [You executive producers Greg Berlanti and Sera Gamble] said was appropriate about me playing him. I remain ambivalent. I'm really questioning why people like Joe so much."

All of this ambivalence might be why Badgley is on a mission to convince fans that Joe is not the guy for them. He's the kind of guy you may enjoy watching on TV, but IRL, you should run far, far away from.

More like this
Twitter Is Burning As Phoebe Dynevor Reveals Daphne’s 'Bridgerton' Exit
By Sophie McEvoy
'The Last Of Us' Video Game Revealed Tess’ Fate In The HBO Series
By Brad Witter
The Plane Crash In 'Dear Edward' Is Based On A 2010 Tragedy
By Grace Wehniainen
'That '90s Show' Is Officially Coming Back For Season 2
By Gretchen Smail and Grace Wehniainen
Get Even More From Bustle — Sign Up For The Newsletter
From hair trends to relationship advice, our daily newsletter has everything you need to sound like a person who’s on TikTok, even if you aren’t.