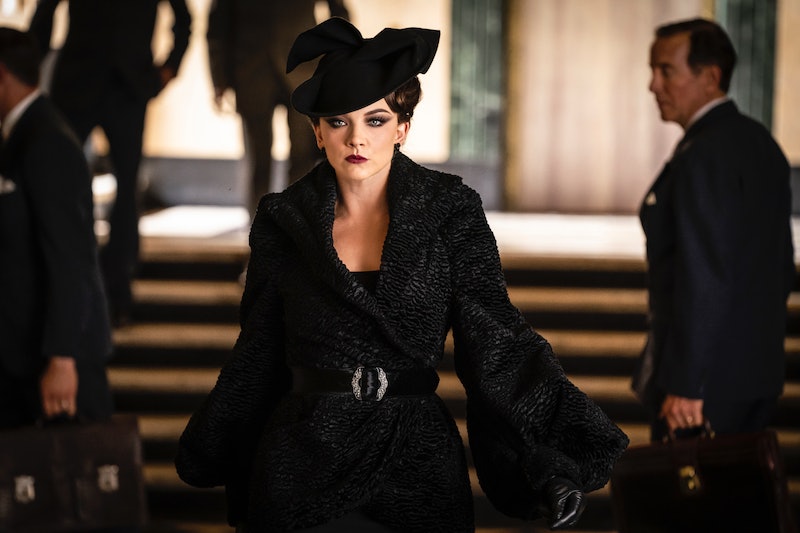 When Penny Dreadful aired its finale episode nearly four years ago in June of 2016, viewers left behind a smoggy Victorian-era London. When it returns to Showtime on Sunday, viewers will find themselves… in sunny 1930s Los Angeles. So how is City of Angels connected to the original Penny Dreadful? The transition from one to the other may be jarring for fans who fell in love with creator John Logan's vision of an eerie England populated by creatures like Frankenstein's monster, ancient witches, and Dracula himself.

The Showtime spinoff picks up about half a century after the events of the original series ended and shifts focus halfway around the world. But don't expect to see Vanessa Ives wandering the streets of early 20th century Los Angeles; the first Penny Dreadful ended with — spoiler alert — Josh Hartnett's Ethan putting a bullet through the head of Eva Green's leading lady, sacrificing his love at her insistence in order to save the world from Dracula's darkness. Rather than relocating the cast, City of Angels introduces a whole new crop of characters for fans to get to know.

Yes, that means that all your old favorites are gone — not just Vanessa and Ethan but also Malcolm Murray, Victor Frankenstein, Dorian Gray, The Creature, and Lily. In their place, viewers will meet plenty of exciting new characters, including an LA detective played by Broadway veteran Nathan Lane, Oscar nominee Adriana Barraza as a superstitious matriarch, and Halt and Catch Fire star Kerry Bishé as a charismatic radio evangelist, among others. The only cast member the original and the spin-off share is Rory Kinnear (formerly The Creature), who will now appear as a doctor who also happens to be a secret Nazi.

So, with only one returning cast member, no returning characters, a new time period, and a brand new location, are there any connections between Penny Dreadful 1.0 and its spinoff? At first glance, die hard fans of the original may be disappointed by City of Angels' lack of direct ties to its progenitor, but the two shows have more in common than just a title. At their core, they share something very important: a creator. Original Penny Dreadful showrunner and Oscar-nominated screenwriter John Logan (Sweeney Todd, Skyfall) is once again shepherding the series to the screen.

Both the original Penny Dreadful and its successor also share a pulpy sensibility straight out of the cheap paperbacks from which the series gets its name, although they lean into the traditions and themes of their respective locations, from Victorian monsters to Mexican-American superstitions. And that's another thing they have in common: the supernatural. Dracula may be gone, but the angels in the spinoff's title aren't just metaphorical. They're roaming the streets of Los Angeles… and so is the devil, in the form of Game of Thrones star Natalie Dormer.

Throughout the series, Dormer will portray at least four different characters — or, more accurately, four different versions of one demonic character. There's the demon's "prime" personality, Magda, as well as seductive housewife Elsa, mousy assistant Alex, and gang leader Rio. (Perhaps Magda will accrue even more personalities for Dormer to portray as the series progresses, much like Tatiana Maslany's burgeoning stable of clones on Orphan Black.)

But despite their shared creator, pulp sensibilities, and supernatural genre trappings, even Logan himself acknowledges that the spinoff is quite different from his original creation. "City of Angels will have a social consciousness and historical awareness that we chose not to explore in the Penny Dreadful London storylines," he told Deadline when the new iteration of the series was first announced. "We will now be grappling with specific historical and real world political, religious, social and racial issues. In 1938, Los Angeles was facing some hard questions about its future and its soul. Our characters must do the same. There are no easy answers. There are only powerful questions and arresting moral challenges."

Given all these differences between the original series and City of Angels, it might be easier to think of Penny Dreadful as an anthology series like American Horror Story, rather than two directly connected shows. Only on Showtime's version of an anthology series, unlike FX's, each unique installment lasts for several seasons rather than just one. Perhaps in another few years, Logan will decide to tell another supernatural story under his Penny Dreadful umbrella and once again move the action to a new corner of the world where he can find new terrifying inspiration.

If what you're looking for from Penny Dreadful is gloomy cobblestone streets and monsters with upper crust British accents, then City of Angels might not be the show for you. But if you're looking for a show with terrific actors playing complex characters locked in a struggle between good and evil… then the spinoff will surely be must-watch TV.