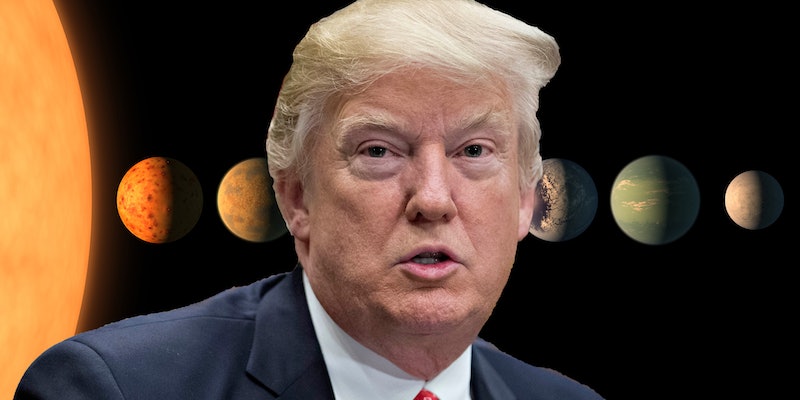 If you've been thinking about fleeing to Canada recently because of a, ah, certain someone, you might be pleased to hear this news. Scientists have discovered seven new planets the size of Earth that could have the potential of life outside of our planet. And considering what's happening on Earth right now, a lot of people are saying, well, it's about damn time.

The new planets are about 40 light years from Earth, which is apparently not too far away when it comes to the solar system. They're orbiting a dwarf star called TRAPPIST-1, and the scientists who made the discovery say that not only are the size and mass of the planets similar to Earth, but they have "equilibrium temperatures low enough to make possible the presence of liquid water on their surfaces." In-depth studies of the planets are likely on their way.

Plans to begin making a new life on another planet began immediately for some people, who realized the opportunity they could have to get away from Donald Trump ASAP. Yes, 40 light years might be the equivalent of 235 trillion miles and you'd 100 percent be dead before you got there, but you'd be living the dream, right? It certainly hasn't stopped tons of people from thanking NASA for the discovery, because it came at just the right time.

I Believe I Can Fly

I Volunteer As Tribute

Let's Just Figure This Out

I'll Walk If I Have To

Need A New One

Building My Own Rocket

Actually, Wait, Maybe They Have The Right Idea

Whether you're packing your bags or hoping Trump goes there instead, it's certainly exciting to know there could be something out there similar to Earth. Let's just hope the new seven planets don't have a terrifying president of their own.