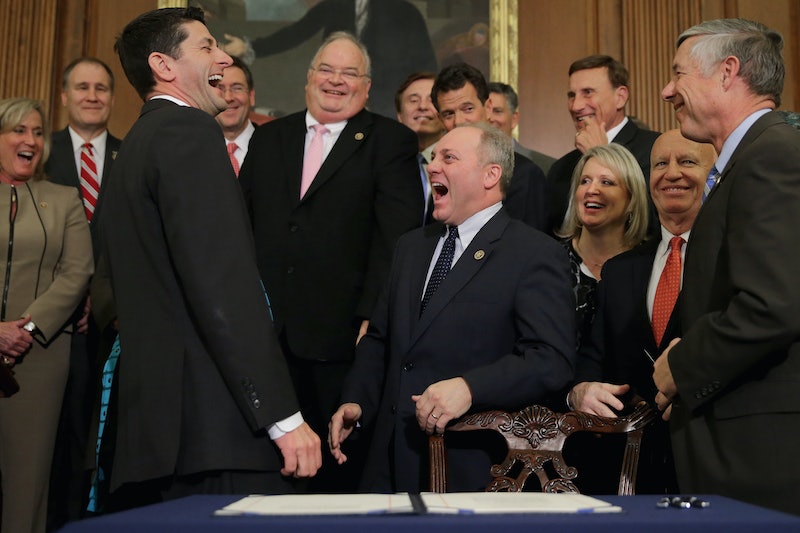 When something like, say, deeply complex health care policy won't impact you personally, it's hard to see it from the perspective of a person who it will impact personally. It's like if you're gambling with house money — there's nothing to lose. Now, one petitioner came up with a way to teach lawmakers the value of a dollar, so to speak. Catapulted into action by the death of his father, Daniel Jimenez of Oregon started a petition aimed at helping lawmakers understand the impact of eliminating the current health care plan by putting them in the proverbial shoes of those who stand to lose by insisting that lawmakers lose their subsidies, too.

In other words, Jimenez's proposal will force the Republican hand and insist that the GOP dare to get their skin in the game, like his family and many Americans will be forced to do. According to the petition:

Several years ago, my dad got the news that he had cancer. Sadly, he passed away. My dad had a job at the time, but his employer did not cover him, and without coverage, he avoided going to the doctor until it was too late. As Congress and President Trump try to pass a new healthcare law, I'm reminded of my father and whether he would have made it if he had early access to cost-effective health care.

An estimated 24 million Americans will lose health care coverage if Trumpcare goes into affect. Not only is that a number that's hard to wrap one's head around, but there is an endless rabbit hole of what devastation that could bring to families who need that care (Hint: All families will at one time or another need health care). Explains Jimenez:

Some politicians cannot relate to the cost burden experienced by families across the nation because they’ve historically received health benefits that most Americans have not. Like millions of people who are panicking about possible changes to their health insurance, I’m concerned the people elected to represent us won’t have to live with the consequences or expenses that the rest of us may have to face soon. I want lawmakers to commit to treating themselves just like those who will be impacted by ACA repeal or replacement.

The petition has already gained a lot of attention. At the time of writing, the petition is at 521,823 signatures and counting.