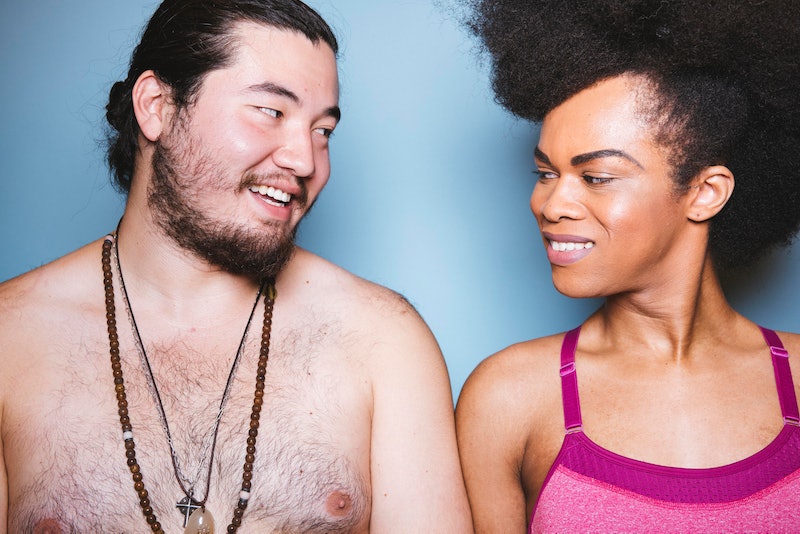 People of all genders and sexual orientations face unfair judgments and unwarranted assumptions based on who they get involved with romantically and sexually. But a new study suggests that men and women get judged differently in this regard. When people hear about someone who has been involved with the same sex, the conclusions they draw about that person depend on their gender.

For the study, published in American Sociological Review, Purdue University professor Trenton D. Mize and Indiana University grad student Bianca Manago asked people about their reactions to hypothetical scenarios where someone who had only slept with or dated people of the opposite gender had sex with someone of the same gender. When this person was female, 51 percent of subjects thought she was still straight. When the main character of the story was male, however, only 31 percent considered him straight. When people read stories about someone who'd had same-sex encounters followed by one opposite-sex one, the same thing happened: People judged more women than men as straight.

Mize and Manago believe this pattern occurred because heterosexual men enjoy a privileged status that is rigidly defined. "We introduce the concept of precarious sexuality to suggest that men’s — but not women’s — heterosexuality is an especially privileged identity that is easily lost," the study reads. Here's why the authors found what they did and what the study says about societal norms regarding gender and sexuality.

The Higher A Group's Status, The More Their Identity Is Policed

The crux of the theory Mize and Manago put forth is that, since heterosexual men are considered the highest-status group in society, their identity is the most harshly policed. Straight men have a higher social standing than men of other sexual orientations, as well as women, while there isn't as much of a status difference between women of different sexual orientations. (Women are considered pretty low-status no matter who they sleep with, in case you haven't noticed). So, by engaging in a behavior inconsistent with their status, straight men who hook up with men are threatening the order of society.

This Is A Problematic Double Standard

One problem with these judgements is that the men and women in the stories were doing the same thing, yet they were judged differently. In general, men often face harsher consequences for engaging in same-sex sexual encounters.

"We have a societal ideal that people will judge someone based on what they do — rather than based on whether they are a man or a woman," Mize and Manago say. "Therefore, these judgements could be problematic because men and women are treated differently for the same exact behavior."

They add that these judgments could have real-life consequences. "If men and women intuitively understand what our study shows — that men’s heterosexuality is more easily questioned than women’s heterosexuality — then this could have important implications for their behavior," they say. "For example, if a man was romantically interested in another man, he may be less likely to act on that interest if he knows it may undermine any ability to claim to be heterosexual in the future."

The Only Person Who Gets To Define Your Identity Is You

Ultimately, no matter what someone's gender is or who they sleep with, they alone get to say what their sexual orientation is. Even if someone has only been with the opposite gender, for example, they could still be gay if they say they are. Identity is completely personal.