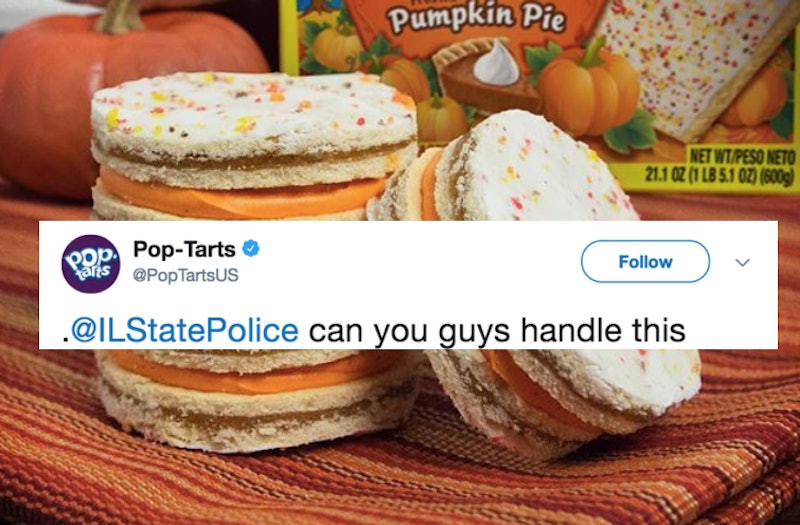 What’s a brand of sweet, delicious breakfast pastries to do when the internet starts trolling them with the grossest recipes centered around those breakfast pastries you can think of? Reply in kind, of course — and that is exactly what Pop-Tarts spent the past few weeks doing. Or perhaps more accurately, it’s what the folks behind the Pop-Tarts Twitter feed have been doing, and believe you me: Pop-Tarts’ Twitter responses to people trolling them with weird Pop-Tart combos are the purest thing on the internet right now. We do not deserve them; they are truly too good for this world. But since we have been lucky enough to be blessed with them, let us take a moment to admire them for the genius they are.

You’ll recall that a few weeks ago, a student at Iowa State University — one Chris Jorgensen — went viral after making a sandwich consisting of two strawberry Pop-Tarts with a slice of American cheese in the middle. To be fair, there’s a time and a place for combining jam and cheese (if you’ve never put strawberry or raspberry preserves in a grilled cheese made with some really excellent bread and super sharp cheddar, you have not lived); however, the idea of Pop-Tarts and American cheese joining together in an unholy union… did not go down well. The Iowa State University Police even jokingly threatened to arrest him for it.

Anyway, the point is this: When Jorgensen first released his monstrous creation on the internet, he did so in a tweet that read, “You ain’t from Iowa if you never had one of these.”

As far as I know, this is not actually true; it is, however,one heck of a joke. It is therefore perhaps unsurprising that a number of other Twitter users have taken it as their queue to come up with increasingly disgusting Pop-Tarts combinations, each allegedly a “state specialty” (although of course that’s not really the case).

The best part of the whole thing, though, isn’t the gross combos themselves; it’s Pop-Tarts’ responses to them. Pop-Tarts did eventually reply to Jorgensen’s OG Pop-Tart monstrosity with the saltiest of quips:

And not too long after, this most stomach-churning of creations…

…inspired a whole string of magnificent burns. Pop-Tarts’ initial reply to this one was simple, yet effective:

As was this follow-up, which came in response to an actual solicitation for a comment on the matter:

And this one? Is absolutely correct:

DANGER. DANGER, WILL ROBINSON. A TRULY DISGUSTING FOODSTUFF THREATENS US ALL.

Then there was this horrific culinary disaster:

Which, honestly, elicited my favorite response:

Although the string of tweets that really takes the proverbial cake came in response to a now-deleted tweet depicting a Vanilla Latte Pop-Tart with yellow mustard strewn across its surface. (For the curious, the tweet can still be viewed via the Wayback Machine, although be warned — it is not for the faint of heart.) Perhaps piggybacking off of the Iowa State University Police’s take on the original Pop-Tart cheese sandwich tweet, Pop-Tarts chose to reachout to the authorities for assistance with this one:

Which, in turn, led to an offer from the police department in Dixon, Illinois to help out, as well:

And, following the deletion of the tweet, a small victory celebration occurred:

Hilariously, someone from Iowa replied to Pop-Tarts plea to the Illinois State Police with a tweet saying they were glad they lived in Illinois’ neighboring state, rather than Illinois itself. But, hey, remember how the Pop-Tart cheese sandwich originated in Iowa?

To be fair, Pop-Tarts did have some nice things to say about this creation from Texas:

The icing on the cake, though? It's definitely this exchange:

I see what you did there, Pop-Tarts.

So, uh… maybe stop yelling at us for not buying houses. We provide valuable services to everyone on the internet while also dealing with an economy that is dramatically different than it was for previous generations. Isn’t that enough? Thanks.