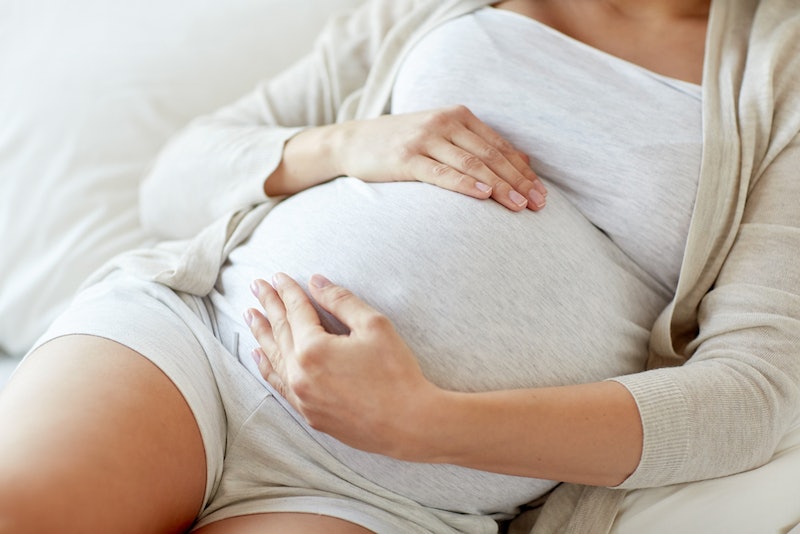 First-time moms need a lot of support to stay healthy — and this includes access to mental health care. According to a press release on a new study from the University of York, first-time parents who deliver by emergency C-section may face a significantly higher risk of postpartum depression, also known as postnatal depression. A severe form of the more common ‘baby blues’, in which people who've just given birth may feel stressed or sad after childbirth, PPD is a serious mood disorder, the American Psychological Association (APA) states. PPD affects as many as one in seven people who give birth, and usually requires treatment, the APA says.

C-sections, also known as cesarean sections, are usually carried out because of complications during labor, the Mayo Clinic says. Given that it’s a major surgery — the baby is delivered via incisions in the abdomen and uterus — a C-section procedure requires significant physical recovery, wrote Vanessa Taylor for Romper, and C-section rates have risen dramatically in recent decades worldwide. . But first-time moms who deliver babies via emergency C-section may also be up to 15 percent more vulnerable to PPD than those who don’t require the procedure are. As such, University of York researchers are calling for increased access to mental health treatments for new parents facing mental health issues after childbirth, according to the press release.

“The findings of this study are striking because they provide evidence of a causal relationship between emergency C-sections and postnatal depression,” lead study author Dr. Valentina Tonei from the Department of Economics at the University of York said in the press release. “This has important implications for public health policy, with new mothers who give birth this way in need of increased support.”

“The effects of postnatal depression can be far reaching, with previous studies suggesting that it can have a negative effect, not just on the health of the mother and her relationships with her partner and family members, but also on the baby's development. Mothers who experience postnatal depression are also less likely to go on to have more children,” said Dr. Tonei.

Dr. Tonei added in the press release that unplanned C-sections might have such negative mental health impact on new moms because they are unexpected, are associated with “a loss of control and unmatched expectations,” and are physically so taxing. While previous research has examined the heavy financial burden associated with C-section surgeries, “there has been less focus on the hidden health costs borne by mothers and their families,” Dr. Tonei said.

Not only does the current research examine the mental health impact of emergency C-sections on new parents, the research expands upon previous studies that have typically been based on small sample groups from individual hospitals, according to the press release. The University of York study analyzed data from 5,000 first-time parents in the UK. Researchers also assessed participants’ mental health histories, differences in resources, and availability of staff members in hospitals where they gave birth.