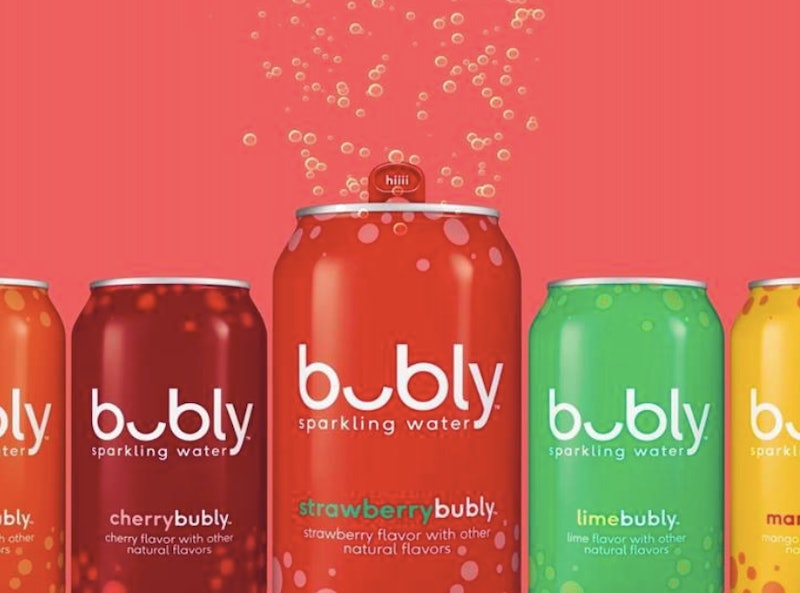 LaCroix better sleep with one eye open, because there's a new sparkling water in town. The mega food and beverage corporation in town was apparently in the market for a little facelift, because PepsiCo launched a line of sparkling flavored water, giving the fancy drink whose name no one can pronounce a serious run for its money.

PepsiCo shared the news in a recent press release. The new bev is called bubly — no capital letter, because PepsiCo is a rebellious rule-breaker like that. The new drink has no artificial flavors or sweeteners, and it comes in eight silly flavors, including limebubly, cherrybubly, and applebubly. PepsiCo aimed to produce a drink that was "upbeat" with a "playful sense of humor." Aside from the fun and cheerful colors the cans come in, they also have unique smiles. One can has a smile with a mustache, for instance, while another has a tongue sticking out. But wait — it gets better. The pop tabs feature cute messages like, "oh hi," making this the first flavored sparkling water that talks to you when you drink it. You'll also notice personal messages on each can, like, "hold cans with me" and "I feel like I can be open around u." A+ for puns, PepsiCo. You can purchase bubly in 20-ounce single serve bottles, or eight- and 12-packs of 12-ounce servings, starting Feb. 26, when the beverage is expected to hit stores.

Sparkling water is the new cool kid in town, and this isn't the first time PepsiCo jumped on the bandwagon. bubly comes about a year after they launched LIFEWTR, purified and pH-balanced drinking water with electrolytes, according to its website. While bubly certainly isn't the first sparkling water, PepsiCo saw a way to do it unlike anyone else: "We created bubly to provide consumers with a great-tasting, flavorful, unsweetened sparkling water in a fun, playful, and relevant manner that is unlike anything we've seen in the sparkling water category today," says Todd Kaplan, Vice President, Water Portfolio – PepsiCo North America Beverages, according to the press release. bubly is such a big deal because it's one of their biggest product launches ever — it's even going to be officially introduced during the Academy Awards on March 4.

bubly will hopefully give PepsiCo an opportunity to tap more into the millennial market, which has, of course, been quite smitten with the LaCroix-type beverages of the world as of late. PepsiCo's snacks, however, seem to be already making strides, with an increase in demand that compensated for the lack of interest in beverages, says Reuters. Specifically, the Frito Lay division saw a five-percent increase in the fourth quarter of 2017, because Cheetos.

While sparkling water has arguably become the "it" drink of the moment, manufacturers are having to increasingly get more creative with their recipes and branding to get and keep the attention of us fidgety, finicky millennials. Diet Coke recently went through its own rebrand, unveiling four new flavors and a sleek and colorful design. Rafael Acevdeo, Diet Coke's group director for North America, explained in an interview with BuzzFeed News that the rebrand was largely to recruit the millennial generation, as their current main demographic is baby boomers.

As of 2016, millennials passed boomers to take the title of the largest generation in the nation — according to research released by the U.S. Census Bureau and shared by the Pew Research Center — numbering somewhere around 75.4 million. We spend a lot of money and have quickly become many manufacturers' target customers. If you want to pop open a can o' bubly, it's available nationwide starting this month. Cheers!