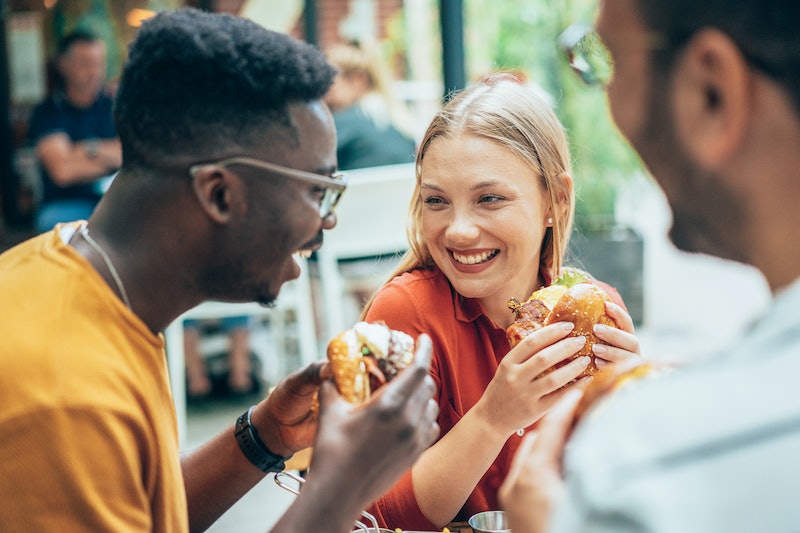 Do different generations have different guilty pleasures? Although most people (including yours truly) waste cash in one way or another, not everyone indulges in the same things. A recent study analyzed how each generation wastes its money, and found that Baby Boomers, Gen X-ers, and Millennials spend money differently in key ways. That said, their spending habits also have more in common than you might think, especially in one regard: Everyone thinks they eat out too much.

Hloom, a provider of free Microsoft templates, surveyed 2,000 people across the United States about their spending habits. Across the board, more than 80 percent of respondents admitted that they waste money, with eating out being the biggest money waster by far — nearly 70 percent of people said they spend too much on restaurants. When Hloom divided people by generation, eating out was still the biggest indulgence, regardless of age. More than half of Baby Boomers cited eating out as money drain, but those numbers went up among the younger crowd. Sixty-two percent of Gen X-ers reported spending too much money on restaurants, and nearly three-quarters of Millennials did the same.

For all three generations, food dominates as a source of wasted money. Baby boomers, Gen X-ers, and Millennials all have eating out, uneaten or expired food, and groceries in their list of top five money wasters.

In fact, Baby Boomers and Generation X have the same expenses listed in their top five, albeit in different orders; for these generations, various food expenses (eating out, groceries, and uneaten food), digital and cable TV, and credit card interest are the most prominent modes of wasting money. In contrast, Millennial’s top five money wasters include alcohol and entertainment, instead of credit card interest and TV, which isn’t all that surprising for a young population. Millennials are also the only generation that doesn’t rank cigarettes as one of their top ten money wasters.

The survey found that, in general, 30 percent of Baby Boomers described themselves as “nonwasteful.” Among Generation X, 19 percent said they’re not wasteful, and only 15 percent of Millennials described themselves that way. It makes sense to me that the youngest generation would consider itself to be the least practical when it comes to money. After all, many Millennials are still at an age when they are less likely than older generations to have children, mortgages, and other pressures to be financially responsible.

Millennials’ perception of themselves as wasteful in this survey is also in keeping with other studies of Millennials, which have shown that they tend to hold particularly negative views of their own generation. A 2015 poll from Pew Research Center found that 59 percent of Millennials describe their generation as “self-absorbed,” while more than 40 percent believe them to be “wasteful” and “greedy.” It’s important to remember that these statistics don’t reflect Millennial’s actual behavior, but rather their own impressions of their generation. So perhaps one question we should be asking is, Why to Millennials perceive themselves in such a negative light?

More like this
Gemma Collins' Net Worth Is Only Going Up
By Catharina Cheung
What Is Brad Pitt’s Net Worth? The Bullet Train Star Now Makes 8 Figures Per Film
By Hugh McIntyre
What Is Beyoncé's Net Worth? The 'Renaissance' Hitmaker Makes 9 Figures On Tours
By Radhika Menon
Rishi Sunak's Wife Is Worth More Than The Queen
By El Hunt
Get Even More From Bustle — Sign Up For The Newsletter