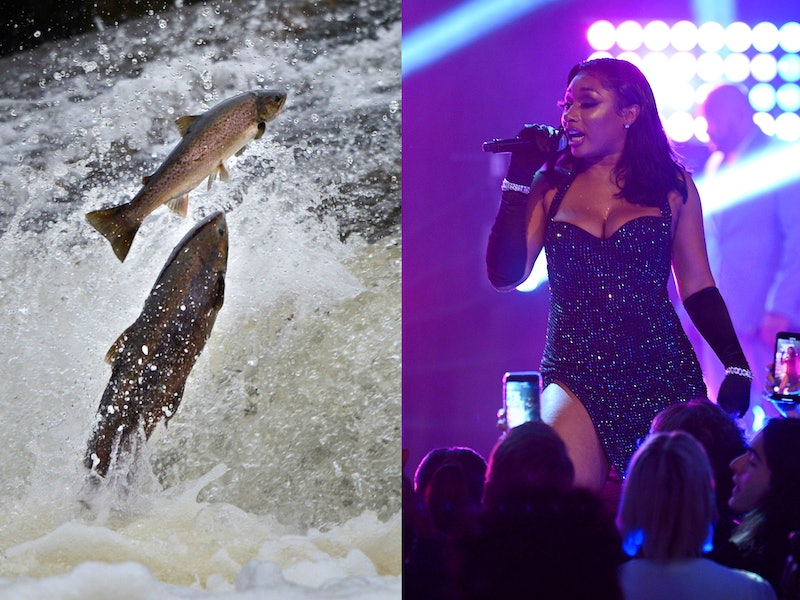 It's no secret that rapper Megan Thee Stallion had a hot girl summer. And in a new interview with Allure, she reveals that while she wants to keep things hot, that doesn't apply to climate change. This is why Stallion said she's trying to be more conscious about what she eats, and is "living that pescatarian lifestyle." If you've never thought about how what you eat relates to climate change, being pescatarian is good for the environment — mostly.

While going vegetarian or vegan has long been touted as best for the environment because growing vegetables doesn't produce the same level of greenhouse gases as raising livestock, a recent study suggests that variety is not only the spice of life, it's better for the planet. Yep, being a "flexitarian" might be better for the environment than other options. Published in the journal Global Environmental Change, the research from Johns Hopkins University Bloomberg School of Public Health reported that the relationship between food production and climate change is complicated.

According to a news release, "the study showed that a diet in which the animal protein came predominantly from low food chain animals, such as small fish and mollusks, had nearly as low of an environmental impact as a vegan diet." Not only that, but being "two-thirds vegan," reducing animal consumption by two thirds, had a lower climate and water footprint than the more traditional lacto-ovo vegetarian diet because dairy farms are one of the largest producers of greenhouse gas emissions.

The study also points out that being able to choose whether or not to be vegan, vegetarian, pescatarian, or flexitarian is a privilege enjoyed by those who have enough food security to be able to make decisions about their diets. And that must be taken into context when discussing food production and climate change. If you are a person who can afford to eat an environmentally conscious diet, and you're interested in "living that pescatarian lifestyle" like Stallion, there are some things to be aware of.

While another study published in the journal Frontiers in Ecology and the Environment came to a similar conclusion about the environmental impacts of eating fish, not all fish are equal. Farmed shellfish and mollusks, and fish like sardines, mackerel, herring, pollock, hake, and cod were found to have the lowest impact on the environment.

On the other hand, some seafood aquaculture (the farming of fish) produces more greenhouses gases than farming livestock. If you're eating fish to reduce your carbon footprint then you're going to want to steer clear of farmed catfish, shrimp, and tilapia. The World Wildlife Fund reported that, in some countries, "aquaculture production has depleted key ecosystems like mangroves, polluted aquatic environments and potentially reduced climate change resilience for coastal communities."

But that doesn't mean eating wild caught fish is better for the environment. The WWF noted that the demand for seafood is so high that 29% of the world's fish stock are classified as overfished and another 61% are fully exploited.

Overfishing also results in bycatch. This happens when other sea creatures are caught in commercial fishing nets, "which causes the needless loss of billions of fish, along with marine turtles, whales and dolphins, seabirds, and other species."

Perhaps you started reading this article feeling all bright and shiny about your commitment to "living that pescatarian lifestyle" and all of this information feels hella overwhelming. I'm right there with you. One thing you can do to ensure you're not contributing to the problem is to follow the two-thirds vegan plan. In addition, before eating fish, do some research so you can make a choice that has the least amount of impact on the environment.