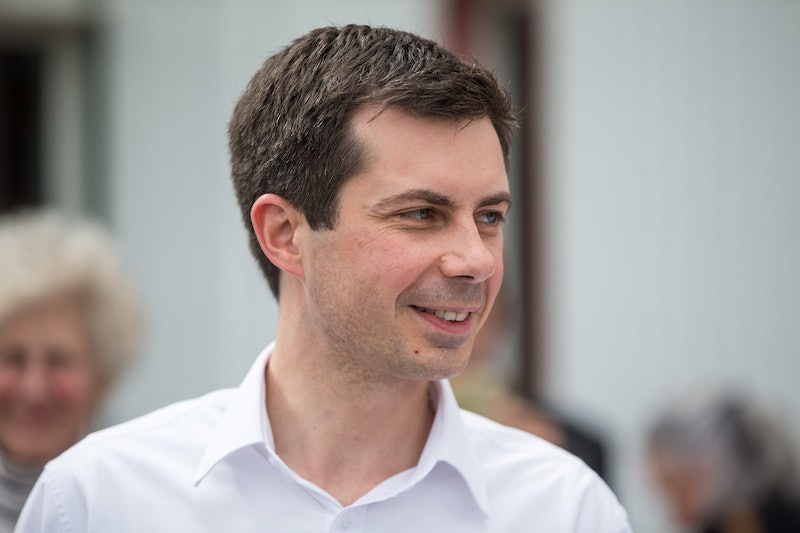 President Donald Trump attempted to insult Democratic presidential candidate Pete Buttigieg on Friday when POLITICO asked him what he thought of Buttigieg. Trump compared him to Alfred E. Neuman, a cartoon caricature of a political candidate that humor magazine MAD first used on its cover in 1956, according toThe Washington Post. Buttigieg responded to Trump's insult on Saturday with a dig of his own.

“Alfred E. Neuman cannot become president of the United States,” Trump told POLITICO regarding the South Bend, Indiana, mayor. Trump was referencing MAD magazine's character, who had a gap in his front teeth and big ears. The character became the mascot for MAD and peaked in popularity in the 1970s, The Washington Post reported.

POLITICO asked Buttigieg what he thought of the insult on Friday in San Francisco, and he took the opportunity to respond with his own subtle dig at the president. "I’ll be honest. I had to Google that," he said, POLITICO reported. "I guess it’s just a generational thing. I didn’t get the reference. It's kind of funny, I guess. But he’s also the president of the United States and I’m surprised he’s not spending more time trying to salvage this China deal."

The president has yet to respond to Buttigieg's own dig, but MAD magazine did briefly troll him, writing on Twitter "Who’s Pete Buttigieg? Must be a generational thing."

Buttigieg, who at 37 is currently the youngest candidate in the Democratic field, has noted in the past that he thinks a "generational change" needs to take place in the White House. In March, when Buttigieg was asked on MSNBC's Morning Joe introduce the message of his campaign, he said, according to Newsweek:

The reality is: When you take one look at me, my face is my message. A lot of this is simply the idea that we need generational change, that we need more voices stepping up from a generation that has so much at stake in the decisions that are being made right now.

Buttigieg also noted that President Trump's decisions will likely have long-term consequences for people in his generation and in generations that follow, while also taking a jab at the president's age of 72.

"That's why I often talk about how the world is going to look in 2054, when I get to the current age of the current president," Buttigieg said on Morning Joe, according to Newsweek. "It's to remind us that this isn't just about one election. This is about an era. The decisions that are being made in our politics right now will decide how the next 20, 30 or 40 years will go."

Friday isn't the first time Trump has criticized Buttigieg. At a Florida rally earlier this week he said, according to The Hill:

We have a young man, Buttigieg. Boot-edge-edge. They say 'edge-edge. He's got a great chance, doesn’t he? "He’ll be great representing us against President Xi of China. That’ll be great. I want to be in that room. I want to watch that one.

Buttigieg responded on Thursday with a Chinese proverb for the president, The Hill reported:

You can't get too worried about the name calling and the games he plays. I was thinking of a Chinese proverb that goes, when the wind changes, some people build walls and some people build windmills. You gotta recognize that we need something that is completely different from what is in this White House.

It seems that Buttigieg might be taking Trump's insults in stride as part of his effort to be that something "completely different."