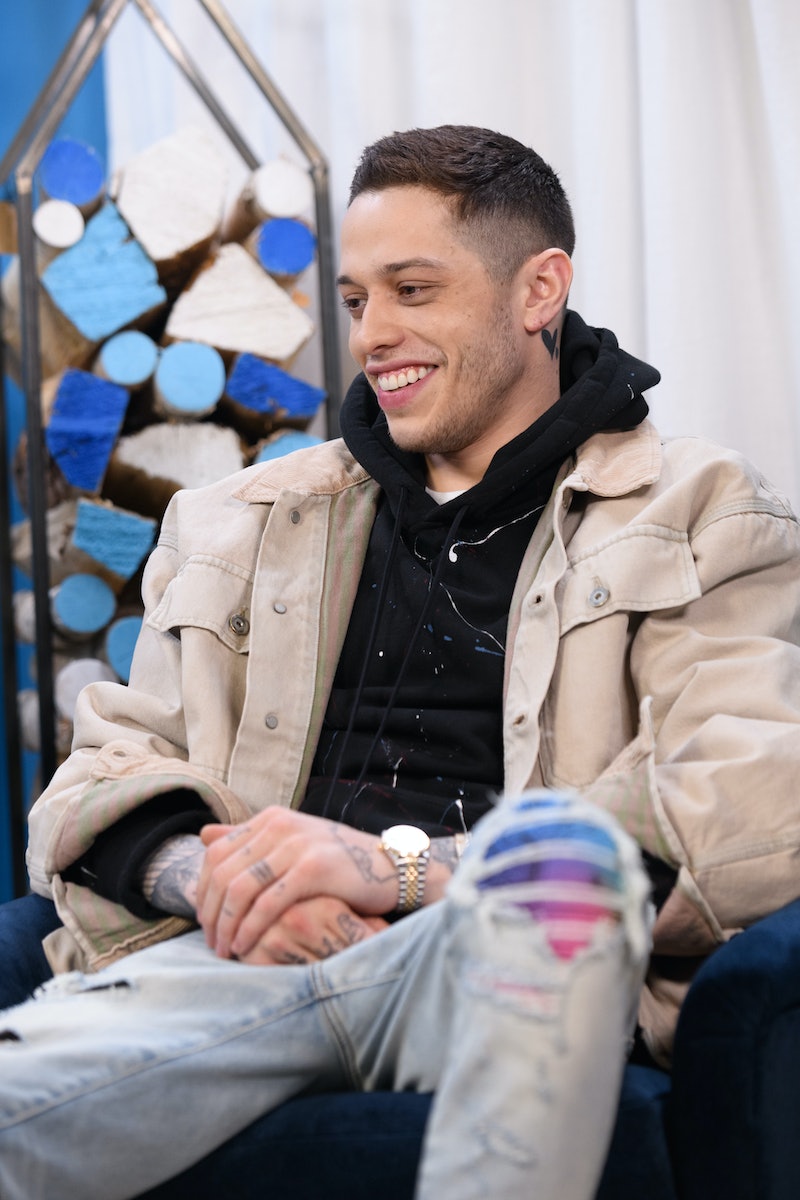 Pete Davidson adds to and subtracts from his tattoo collection so regularly that fans need a Dry-Erase board to keep track. Whether it's new pieces or coverups of ink from his relationship with Ariana Grande, he goes under the needle... a lot. Pete Davidson just got a huge unicorn tattoo on his arm, and this latest ink appears to be his most massive and most unexpected design to date. The dramatic tattoo features incredible detail, from the spirals in the horn to the definition of the muscles to the shape of the nostrils to the mane. The unicorn is so pretty you won't be able to stop looking at it.

New York City tattoo artist Ryan Mullins of Top Shelf Studios posted a photo on his personal Instagram earlier this week, which saw him hard at work on Davidson's bicep. In that shot, you can see Mullins inking Davidson's upper arm while the Saturday Night Live star looks away from the camera. The tattoo itself is not visible in this image.

However, Mullins just shared the end result. He added a simple caption to the tattoo photo, writing "Unicorn on my dude Pete Davidson." He didn't offer any additional insight or information on the tattoo or from his client.

From this vantage point, you can't quite tell if the unicorn is on Davidson's forearm or his bicep. The way Davidson's arm is positioned here, it looks as though it could be his lower arm. However, Davidson's forearms are already pretty heavily inked, so his unicorn very likely lives on his bicep.

It seems like only a matter of time before Davidson shows off the healed ink, and its exact placement, while out and about.

Davidson has shown a preference for smaller tattoos that he sprinkles all over his body, such as the heart on the side of his neck, the word "Cursed" on the back of his neck, the Tootsie Roll Pop Owl, or the heart-wrenching "8418" tattoo, which references the badge number of his late father, a firefighter who died in the September 11 attacks.

The distinguished unicorn tattoo is one of Davidson's largest pieces, taking up quite a bit of bodily real estate. Davidson deleted his Instagram, so he hasn't posted anything about the new inking. He hasn't shared any information regarding its personal significance or what inspired it as of press time. For now, fans are left to speculate and marvel at this gorgeous tattoo.

The internet has already weighed in with its opinions about Davidson's new ink. The comments on Mullins' Instagram post were largely positive and celebrated the artistry. One user exclaimed, "Gorgeous, just gorgeous!," while another stated, "More people need more unicorns!!!." Another was quick to recognize Mullins' talents, saying, "Don't you get tired of doing perfect tats every time?"

Over the summer, Cosmopolitan reported that Davidson had more than 40 tattoos. That number has since increased. He continues to surprise fans with new etchings and keeps them guessing about what the finished product means. It feels like only a matter of time before he updates his tattoo collection again.