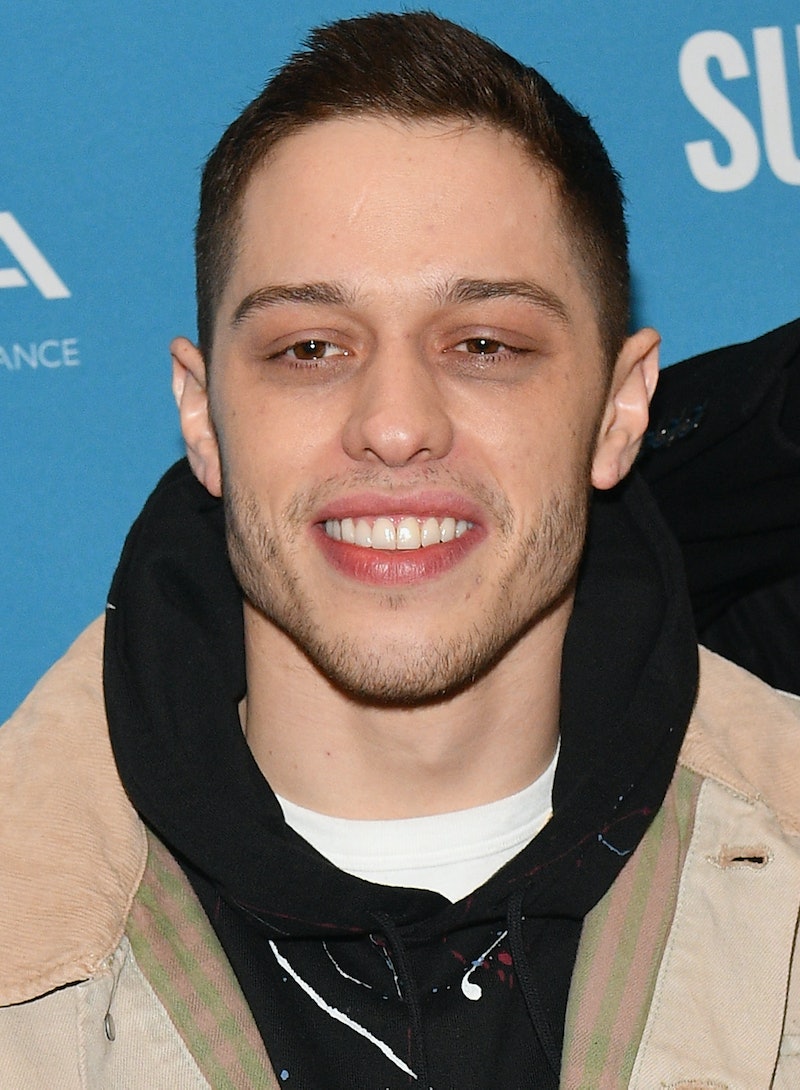 Months after splitting from Kate Beckinsale and a year after his romance with Ariana Grande, Pete Davidson reportedly has a new love in his life. According to an Aug. 28 report from Us Weekly, Pete Davidson is dating actor Margaret Qualley, who starred in Quentin Tarantino's latest film, Once Upon a Time in Hollywood. Additionally, the publication reported that the new couple have reportedly been an item for some time now.

Us Weekly reported that Davidson and Qualley, who is the daughter of actor Andie MacDowell, have been dating for a couple of months. A source told the publication, “They’ve been seeing each other for a couple of months and Margaret is really excited about him." The source also mentioned that the new couple could be making their red carpet debut incredibly soon, as they are reportedly set to attend the Venice Film Festival together to support Qualley's latest movie, Seburg, which will premiere at the event on Aug. 30.

Qualley was previously linked to actor Nat Wolff and, in 2017, she was reportedly dating director Cary Fukunaga, per Us Weekly. As for Davidson, many are well aware that the Saturday Night Live star's love life has been a major topic of conversation over the past year, as he has romanced two very famous women.

Most recently, Davidson was reportedly romancing Kate Beckinsale. The comedian was first spotted with the actor back in January, as the two were seen getting quite close at a Golden Globes after party. The pair dated for about four months before they split in April 2019, according to People. The publication noted that there was no bad blood in their breakup though, with a source saying, "They’re still friendly, but it just didn’t work out.” As for why it didn't work out, the source related that "long distance" played a part in the split and that “They had been trying to make it work up until very recently, but it’s over now.”

Prior to his romance with Beckinsale, Davidson dated superstar Ariana Grande during the summer of 2018. The two reportedly started their whirlwind romance in May 2018, per People. Shortly thereafter, in June 2018, the couple shocked fans everywhere by revealing that they were engaged to be wed, according to both Us Weekly and People. At the time, a source even told Us Weekly that Davidson and Grande are the "perfect fit," but that "They are not rushing to get married. Their friends are really excited and supportive."

Alas, the couple was not meant to be. In October 2018, TMZ reported that Grande and Davidson had parted ways and had subsequently called off their engagement. Additionally, a source told People about the breakup, "It was way too much too soon. It's not shocking to anyone."

Well, about a year after their highly publicized, whirlwind romance, it appears as though both Grande and Davidson have since moved on, as the "7 Rings" singer is rumored to be dating Social House's Mikey Foster and Davidson, of course, has moved on with his paramour of the last couple months, Qualley.

More like this
What Is Megan Thee Stallion’s Net Worth? The Traumazine Hitmaker Isn’t Worried About A Budget
By Hugh McIntyre
Megan The Stallion’s “Anxiety” Song Shouts Out Britney Spears & Whitney Houston
By Grace Wehniainen
Revisit 1992’s 'A League Of Their Own Cast' Photos After The New TV Series
By Grace Wehniainen
'Indian Matchmaking's Arshneel Is Keeping His Potential Courtship With Rinkle Private
By Radhika Menon
Get Even More From Bustle — Sign Up For The Newsletter