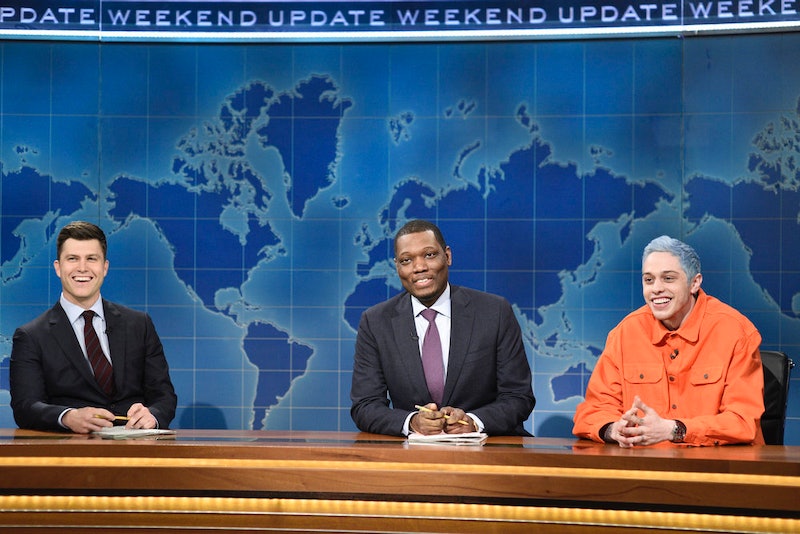 Will Heath/NBC
By Lindsay Denninger
November 11, 2018

Comedians, in general, are supposed to "punch up," lampooning government officials, kings, queens, and those generally just in a position of power. Sometimes, though, a joke just doesn't land, and in that case, if it truly offends, an apology is never a bad thing. Pete Davidson's Saturday Night Live apology to Lt. Commander Dan Crenshaw, for example, was completely necessary given the comments that Davidson made the week before about the Navy veteran. Saying you were wrong is difficult, but in this case, Davidson knew what he had to do.

But first, for set up — on last week's episode, Davidson tried to push attention away from his breakup with Ariana Grande and opted instead to call to the "really gross people running for office this year." This included Crenshaw, who was running for a House seat in Texas (he was re-elected). “This guy’s kind of cool,” Davidson said as a picture of Crenshaw showed on the screen. “You may be surprised to hear he’s a congressional candidate from Texas and not a hit man in a porno movie. I’m sorry, I know he lost his eye in war or whatever.” Crenshaw wears an eye patch because he lost an eye to an IED while he was in the Navy SEALS in Afghanistan. Criticism was swift, with even Davidson's castmate Kenan Thompson saying that Davidson went too far with the joke.

So Davidson knew what he had to do — he said his piece on this week's show, explaining that he was wrong and crossed the line. Then, Crenshaw himself showed up on Weekend Update to make fun of Davidson, calling him things like "if the meth from Breaking Bad came to life" and "a Troll doll with a tapeworm." Crenshaw also trolled Davidson and his Ariana Grande breakup by letting his phone go off during the skit. His ringtone? "breathin" by Grande herself.

It's hard to tell if Davidson was actually in on that joke, but it didn't matter as soon as Crenshaw was allowed to say his piece. Given that this show is taking place partly on Veterans Day, Crenshaw urged Americans to join together to honor their veterans and first responders, and instead of saying "thank you," we should be telling them "never forget." Being a first responder or in the military is not easy, and civilians shouldn't separate themselves from the men and women in uniform — they should be joined together in thought at the very least.

It's nice here that Saturday Night Live was able to make something good of a bad situation — and terrible PR at that. It takes a strong person to admit when he or she is wrong, and Davidson was willing to own up to his bad joke. What he finds offensive is different than the public at large, it seems, and his backtracking isn't offensive to comedy or its foundations — it's simply a recalibration. As both Crenshaw and Davidson said, the world needs more understanding, more coming together. Supporting veterans is a great way to do that.

More like this
Kanye West Has The Most Kanye Reaction To Kim Kardashian & Pete Davidson's Split
By Jake Viswanath
Kim Kardashian & Pete Davidson Reportedly Broke Up After Dating For 10 Months
By Grace Wehniainen
'Stranger Things' Season 5 Will Echo Season 1 In A Key Way, The Duffer Brothers Confirm
By Kadin Burnett and Sophie McEvoy
What's New On Netflix: A Third '365 Days' Movie & Lili Reinhart’s New Film
By Arya Roshanian
Get Even More From Bustle — Sign Up For The Newsletter