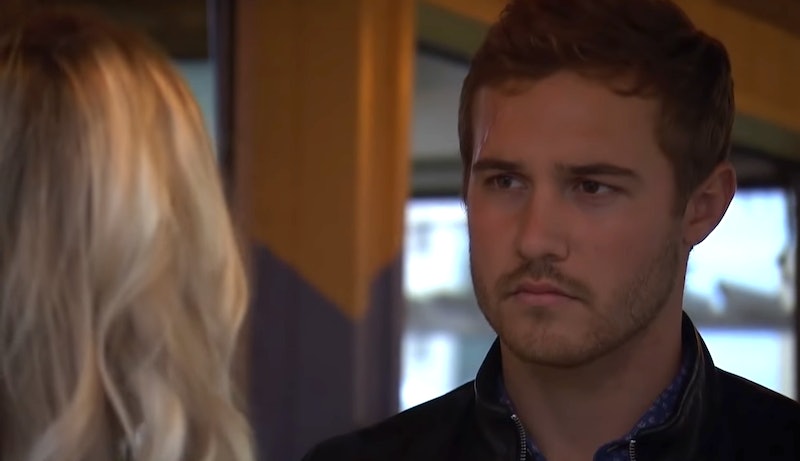 Peter's hometown date with Victoria F. in Virginia Beach was going swimmingly before a world-rocking revelation when Peter's ex warned him about Victoria on The Bachelor. And, in the wake of the drama-filled episode, the mysterious Merissa Pence is explaining why she interrupted Victoria's hometown date. In her brief but memorable appearance, her face was blurred and her full name and relationship to Peter weren't identified. But Merissa has since come forward, and she's got a lot more to say.

In the episode, audiences saw Merissa grab her ex Peter after the concert portion of his date with Victoria F. She told him to "be careful" with Victoria, saying, "I know that you're a great guy and I don't think you deserve what you're on a date with right now." She added, "There's been many relationships broken up because of her." Bustle has reached out to Victoria F. for comment, but did not receive an immediate response.

As she explained on The Bachelor, Merissa and Victoria F. run in similar social circles and used to be friends. In recent interviews with ET and Us Weekly, Merissa alleged that before Victoria left for The Bachelor, the controversial contestant was focused on the fame the show would bring her. But Merissa says her decision to step in was about more than Victoria F. potentially being there for the wrong reasons. "I feel like I have been that voice for them, and that's kind of been my mindset on all of this," she told ET, referencing couples she claims Victoria had a hand in breaking up.

While she didn't give specifics on The Bachelor, Merissa claimed to Us Weekly that Victoria has broken up four marriages. "I knew who Victoria was, as far as her reputation, but I honestly didn't know that she had done as much damage as she had done to our hometown," she claimed. Merissa added to Us Weekly that she didn't intend to "slander" Victoria, but, accusations aside, she just wanted was to protect Peter. "I just wanted him to end his relationship with Victoria," she told ET. "I just really wanted him to know her as a person and [say], 'Please do not propose to her, because this is not going to work out for you.'"

Victoria F. hasn't addressed these allegations directly, but she did address "rumors" in a Nov. 22 post on Instagram. "The RUMORS you are hearing are FALSE," she wrote at the time. "There will be a time & place where I can defend myself, but for now I choose to wait."

While the whole situation is particularly messy — even for The Bachelor — with a lot of hearsay, Merissa still believes that Peter will find his person. "I hope at the end of this show, he at least has found someone that is perfect for him. And if he didn't, I know he will," Merissa told ET. Well, after those dramatic hometown dates, here's hoping she's right.