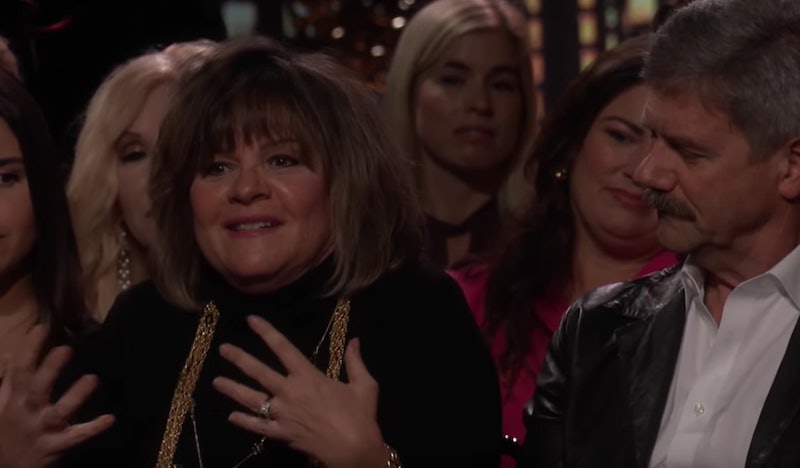 This season of The Bachelor may have been about Peter Weber's attempt at finding love, but during the After the Final Rose special it might as well have been The Barb Show. And it seems the Weber matriarch isn't done making waves and raising a few eyebrows, even now that her son's journey has come to a close. In fact, Peter's mom Barb reached out to Kelley Flanagan after The Bachelor finale wrapped, requesting that the two of them set up a lunch and shopping date sometime in the near future.

Kelley became somewhat of a fan favorite throughout Peter's season due to her laidback attitude toward the whole Bachelor process and her overall mature nature. That's why it was so disappointing that she was completely MIA during the Women Tell All special. Yet her absence was more than made up for when she appeared in the audience during the After the Final Rose special Tuesday night, though it remains unclear exactly what she was doing there, given that she played no part in the evening's events. At least, not that we know of.

However, it seems Kelley managed to catch Barb's eye. Peter's mom commented underneath a recent Instagram photo of the former contestant, making it seem like the two of them are well on their way to becoming BFFs.

“That’s a wrap!” Kelley wrote on Instagram, alongside a photo of herself from ATFR. “What a great experience and will always be grateful for the opportunity to join season 24!" Shortly afterward, Barb wrote her own message in the comments section, stating, “We need to do lunch and go shopping for the day," to which Kelley responded, "yes please!"

This in itself raises so many questions. For starters, how do these two even know each other since, as far as we know, they've never met before now? And even if they did meet once, how are they at the point of spending an entire day together? Is this why Kelley was at the ATFR? Because she and Barb are such good friends? Barb was certainly in need of a friend or two, given the backlash she's seen over the past few days.

Barb made it perfectly clear during the finale that she does not approve of Peter and Madison's relationship, even going so far as to say that all of her son's family and friends know that it won't work out. Some fans think Barb's attempt at bonding with Kelley could be part of a strategy to break the two of them up by bringing an old flame back into his life. "This mama blatantly casting Kelly for the next Mrs weber for the whole word to see," Instagram user fida4ziz remarked.

Whether or not that theory has any truth behind it remains to be seen. Maybe it really is just an innocent lunch date, but who knows. The Bachelor producers may work hard at creating drama, but Mama Weber may work even harder.

More like this
All The Clues Zach & Christina Are Together After 'The Bachelor'
By Grace Wehniainen
Brianna Revealed Why 'The Bachelor' Premiere Was Tougher For Her Than You Saw On TV
By Brad Witter
Hannah Ann Got Engaged 3 Years After 'The Bachelor' & The Proposal Was Dreamy
By Grace Wehniainen
10 Photos Of The Wildest Limo Arrivals From 'The Bachelor' Premiere
By Brad Witter
Get Even More From Bustle — Sign Up For The Newsletter
From hair trends to relationship advice, our daily newsletter has everything you need to sound like a person who’s on TikTok, even if you aren’t.