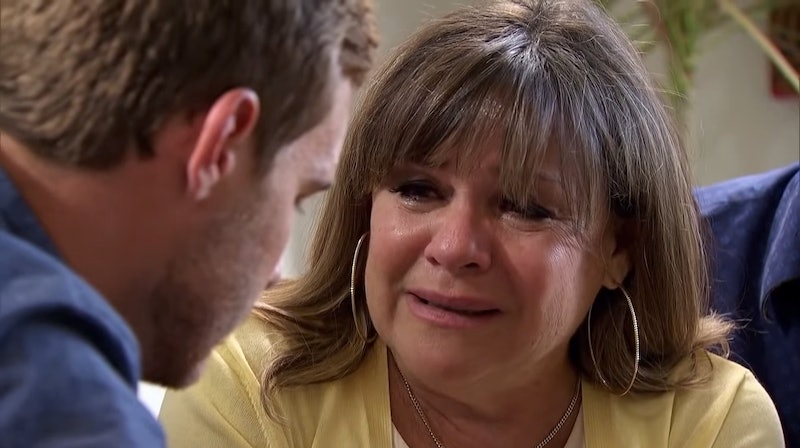 The Bachelor finales are always full of a lot of tears, but normally not from the Bachelor's parents. Previews of Peter's mom in The Bachelor finale crying to her son and telling him to not let "her" go and to "bring her home" to the family have been haunting fans all season. Now that it's nearly the end of the season, it seems that Peter's mom must be talking about Madison.

Peter currently lives with his parents still, so when Barbara seemingly pleads with her son to bring one of his final two women home to them, she means it literally. But even though Pilot Pete and his parents are very close, Barb does seem quite emotional about two women she doesn't know. However, Madison has a significant advantage over Hannah Ann in that department since Madison met Peter's parents at their vow renewal ceremony. So perhaps Barb is so committed to Peter bringing the mysterious "her" home because she has already started to feel like part of the family.

Early theories were that Barb was talking about Hannah Brown and one Reddit theory from seethroughtop even wondered if Barb is referring to Peter's ex Merissa, who crashed his Virginia Beach hometown date with Victoria F. But those are sort of far fetched theories and if you're really studying the promos and sticking with the remaining two women — Madison is the logical subject of Barb's passionate plea to Peter. Especially since the previews (which, admittedly are often intentionally deceptive) are leading viewers to assume that Hannah Ann doesn't hit it off with Peter's mom since Barb tells her, "I'm a little bit concerned."

In the hometown date preview, Barb is heard telling Peter, "That's what love stories are made out of. And God has placed her there for you." Barb's reference to God might be somehow related to Madison's religious beliefs, which has become a source of tension for the couple. So while Madison didn't walk away after the Fantasy Suite dates, she could walk away sometime before the Final Rose ceremony.

Glamour asked Peter if his mom was talking about Madi and he replied, "I think that's a very fair theory." Then again, he did add that his mom is "very emotional" and really bad at hiding her emotions. "She definitely has opinions that she feels like she has to get across to me. I know it only comes from a place of love. She's my biggest fan," he added.

So, it's very probable that the "her" in question is Madison. Or it could end up being a generic, emotional plea for her son to find love. Either way, fans will have all the answers soon enough.

More like this
Madison From 'The Bachelor' Chronicled Her Life As A "Sister-Mom" On Social Media
By Grace Wehniainen
'Bachelor' Fans Think Rachel & Clayton Are Dating After This TikTok
By Grace Wehniainen
Kaitlyn Bristowe Said Chris Harrison Ignored Her After Her 'Bachelorette' Hosting Gig
By Grace Wehniainen
Zach Addressed His "Boring Bachelor Energy" After His Group Date With Latto
By Grace Wehniainen
Get Even More From Bustle — Sign Up For The Newsletter
From hair trends to relationship advice, our daily newsletter has everything you need to sound like a person who’s on TikTok, even if you aren’t.