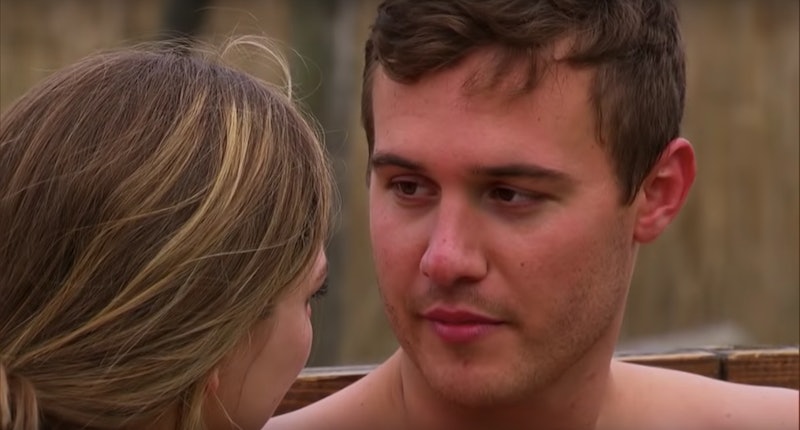 Since stepping out of the limo on night one of The Bachelorette, Peter's parents have come up on more than one occasion during his time with Hannah. Not only did they meet in a pretty adorable way, but he's said that they have a great relationship. And because of them, he's learned a lot about love and how to be a good life partner.

"Funny story," Peter, who's now a pilot for Delta, told Hannah early on in the season. "My dad was a pilot as well, my mom was a flight attendant. And she was on his flight one time and he was walking back to the cockpit. And he walked past her, and she just saw his butt. And she goes to her friend, she said, 'That's the guy I'm gonna marry.'" And she was right. They hit it off and the rest is history.

Likely because his parents aren't shy about their love for each other, Peter isn't shy about his love for them. The majority of his Instagram posts are dedicated to his parents and the rest of his family, how much he loves them, and how thankful he is to have them in his life. It's all very earnest and sweet, which is pretty much Peter's M.O.

For Mother's Day in 2014, Peter shared a photo with his mom and brother. "Love you @sweetnums more than you'll ever know," he captioned the post. "Thanks for being my best friend." Not every grown man is willing to call his mom his best friend, and it says a lot about Peter's character.

A couple of fun facts about Peter's mom is that her full name is Barbara Innocente de Jesus Figarola Enfante Borrego Rodriguez Weber and she was once crowned Miss Illinois, which Hannah, a pageant queen herself, was impressed by when Peter told her on the show. Barbara is no longer a flight attendant, but a realtor in their hometown area of Westlake Village, California, according to her company's website.

Peter obviously admires both of his parents, but he really looks up to his dad and his career as a pilot. He often refers to him as "Captain" on Instagram, and took pride in the moment that he was able to fly a plane with his dad in the co-captain's chair. "Been chasing the dream my whole life," he wrote on Instagram. "One of my last flights as a Captain for Compass Airlines and got to give my dad a ride." He coupled a selfie from their flight with a throwback photo of young Peter in the cockpit with his dad.

Hannah has expressed her excitement about meeting Peter's parents in the past, and now that they're going to his hometown, she'll finally be able to see who he's been gushing about all season. As close as his family is, she's bound to feel right at home. And if she's lucky, she'll get to hear the butt story from the two people who lived it firsthand.