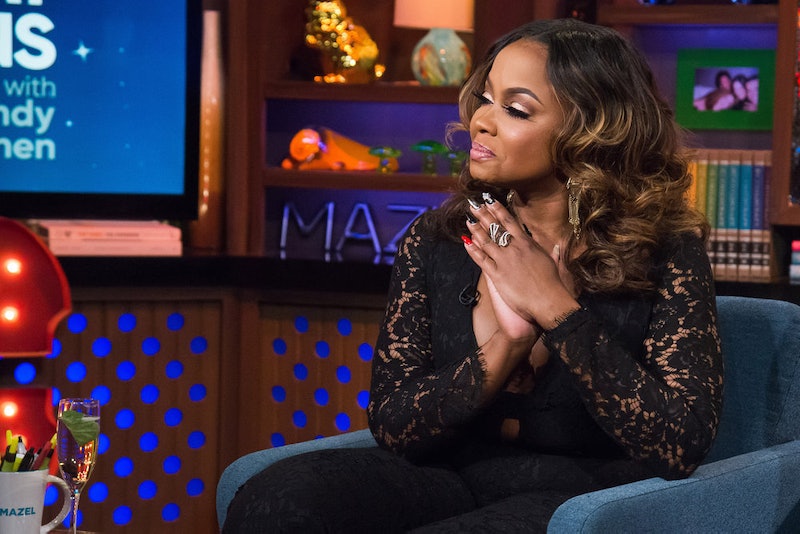 At long last, the final episode and last hour of Real Housewives of Atlanta Season 9 is here: the "Secrets Revealed" episode. And while this is never the most exciting installment of a Housewives season, this one was particularly pale, because the reunion special was so incredibly over the top. But with all of the drama that happened during the season, this special may be the last time Phaedra Parks is ever on Real Housewives, because, allegedy, Phaedra is leaving RHOA after she revealed that she was the source of the drug and sexual assault rumors about Kandi Burress — according to TMZ, Phaedra has been cut from the cast for the upcoming tenth season of the series.

According to another report, Phaedra tells TMZ that, allegedly, the producers are the ones who originated the Kandi rumors... but all of that just so happened to be edited out of the series. "The producer didn't necessarily tell her to repeat it with cameras rolling, but we're told Phaedra explained the producer's role during the reunion show. She's also angry because that was edited out of the reunion to make it look like she acted alone," TMZ claims. None of this has been corroborated by the Bravo producers, not even the claim that Phaedra will no longer be on the show.

According to Page Six, neither Bravo nor Phaedra's representatives have commented on the potential change in the RHOA cast. However, as they point out, Phaedra has made some changes to her social media that no longer identifies her as a cast member of the series. And in the above Instagram post, she wrote: "New day, new week!" right after the end of the four-part reunion, as the only response to the end of the season. And while Phaedra may not have been officially fired from the series yet, if she's indirectly commenting on reasons that she may not be back it seems that she could be moving on from The Real Housewives of Atlanta without losing her job — perhaps this season-long conflict has led her towards something else.