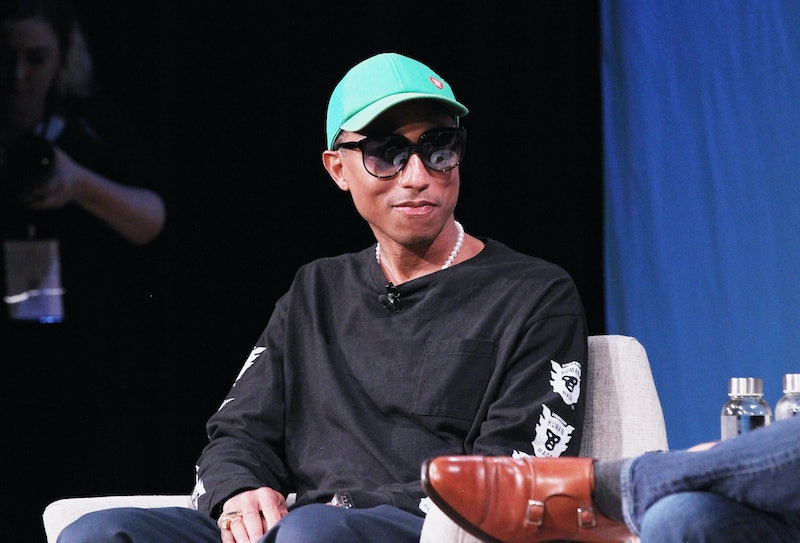 The line of artists telling POTUS he can't play music at his rallies just got a little bit longer: Pharrell Williams' lawyers sent Trump a cease and desist letter for playing his song, "Happy," at a MAGA rally. The song was reportedly played at a rally in Indiana on the same day as the tragic shooting at a Pittsburgh synagogue that left 11 dead on Saturday. Among other things, Williams' lawyers called out Trump for playing "Happy" on such a heartbreaking day.

On the day of the mass murder of 11 human beings at the hands of a deranged "nationalist," you played [Williams'] song "Happy" to a crowd at a political event in Indiana. There was nothing "happy" about the tragedy inflicted upon our country on Saturday and no permission was granted for your use of this song for this purpose.

This isn't even close to the first time Trump has received a cease and desist letter from a musician for playing their music at one of his rallies. Steven Tyler has sent several cease and desist letters to Trump dating back to the 2016 campaign trail. Other artists who have told Trump to stop playing their music include Queen, R.E.M., and Prince's estate, per The Hollywood Reporter.

On Monday evening, while speaking to Fox News host Laura Ingraham, Trump defended his decision to host the Indiana rally, saying, "Rallies are meant to be fun."

He added that he stood by his decision to continue forward with the rally despite the devastating circumstances. He said, "Frankly, I think that's the way it should be. You can't let these people disrupt more than they already have. They are disgraceful."

At the Indiana rally in question, Trump also acknowledged the Pittsburgh shooting. He said, “This wicked act of mass murder is pure evil, hard to believe and frankly something that is unimaginable. Our nation and the world are shocked and stunned by the grief." He further joked that he considered canceling the event due to a "bad hair day."

This is not the first time Williams has stood out against Trump as a musical artist. In December 2017 while promoting his new N.E.R.D. album, Williams said of Trump to The New York Times, “Before he even became the nominee, I said that he was gonna win that. The other thing that no one wanted to listen about is when I would say to them, ‘Dude, he saved NBC.’ That guy knows how to talk to people.”

At the release of his album in December, Williams said in a London conference room at his record label, Sony, "I don’t know if you’ve seen the news or who’s running my country but it’s a real f*cking sh*t show. I’ve never seen such desperation in my life.”

As of Monday, Williams' most recent tweet on his feed was retweeted from Parkland student-turned-activist Emma Gonzalez, in which she encouraged everyone to get out there and vote on Nov. 6 for the midterm elections.