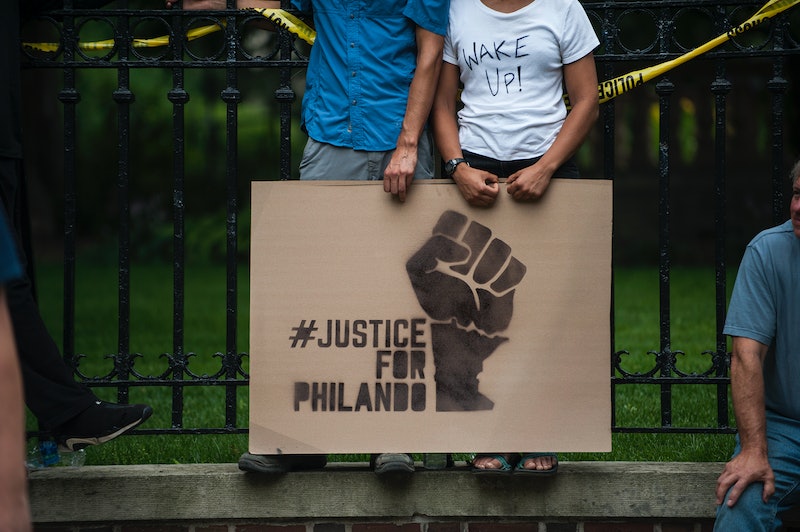 The Second Amendment guarantees that "the right of the people to keep and bear Arms, shall not be infringed." But Philando Castile's death proved that exercising gun rights comes at a steep cost if you aren't white, even in 2017.

In July 2016, Castile's girlfriend, Diamond Reynolds, filmed his death on Facebook Live, leaving America both shocked and outraged. After being pulled over for a broken taillight at a traffic stop, according to Reynolds, Castile informed the officer that he had both a firearm permit and a firearm in his vehicle. Shortly afterward, St. Anthony Police Department officer Jeronimo Yanez fatally shot the 32-year-old.

Moments prior, Castile had reportedly assured the officer he was not reaching for his firearm, according to Reynolds. The Baltimore Sun, which helped bring this conversation about gun rights to light, attributed Yanez's reaction to "racial panic." Yanez, however, claimed he felt as though his life was in danger, as he believed Castile was reaching for his gun instead of his license.

Though Castile's death sparked protests across the country, the National Rifle Association (NRA) has been silent on the outcome of Yanez's trial. (Bustle has reached out to the NRA for comment.) Dashcam audio confirms that Castile let the officer know that he had a gun. Ultimately, it cost him his life.

Though the NRA hasn't said anything since the officer's acquittal, it hasn't completely ignored the situation. On July 8, the association posted a rather neutral statement regarding Castile's death on Facebook.

The reports from Minnesota are troubling and must be thoroughly investigated. In the meantime, it is important for the NRA not to comment while the investigation is ongoing.

Rest assured, the NRA will have more to say once all the facts are known.

However, the association has not commented on the matter since. Phillip Smith, president of the National African American Gun Association, expressed his concern to The Washington Post following Yanez's acquittal. "It troubles me tremendously when I see a young man following the rules, doing what he's supposed to be doing, and there's still no accountability from a legal perspective," he said. Again, Yanez claimed that he believed Castile was going to pull out his gun as opposed to his license.

Exercising a constitutional right shouldn't require any American to risk his or her life. And until gun rights organizations acknowledge that black gun owners' rights should be protected just as much as white gun owners' rights, the United States can't afford to let this conversation go.