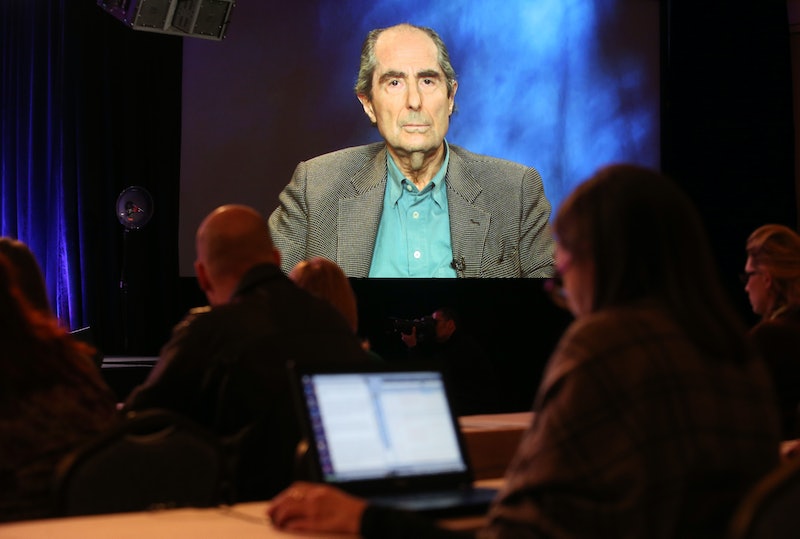 Back in 2004, twelve years before Donald Trump was elected, the novelist Philip Roth predicted Trump's rise to power in his novel The Plot Against America. Now that his words have come true, Roth has some strong views on our current President — namely, that Trump is "humanly impoverished." Roth talked to The New Yorker about his views on the new President, and urged his fellow writers and journalists (Roth himself is now retired) to keep speaking up.

Roth sees Trump as having more "limitations of character and intellect" than either Richard Nixon or George W. Bush, both Republican presidents under whom Roth felt being a citizen was "alarming." The current President, more so than either of the two previously mentioned, is, in Roth's opinion, "ignorant of government, of history, of science, of philosophy, of art, incapable of expressing or recognizing subtlety or nuance, destitute of all decency, and wielding a vocabulary of seventy-seven words that is better called Jerkish than English." Having him as President is beyond what even Philip Roth's literary imagination could have come up with. He clarifies: "It isn’t Trump as a character, a human type—the real-estate type, the callow and callous killer capitalist—that outstrips the imagination. It is Trump as President of the United States."

Now that we find ourselves living in Roth's The Plot Against America, Roth has some words of advice, particularly to writers: "Unlike writers in Eastern Europe in the nineteen-seventies, American writers haven’t had their driver’s licenses confiscated and their children forbidden to matriculate in academic schools. Writers here don’t live enslaved in a totalitarian police state, and it would be unwise to act as if we did, unless—or until—there is a genuine assault on our rights and the country is drowning in Trump’s river of lies."

Essentially, while we should absolutely be wary of the threat that Trump poses to our freedom, Roth is clear that we mustn't yet give up our voices — and instead must "continue robustly to exploit the enormous American freedom that exists to write what they please, to speak out about the political situation, or to organize as they see fit."