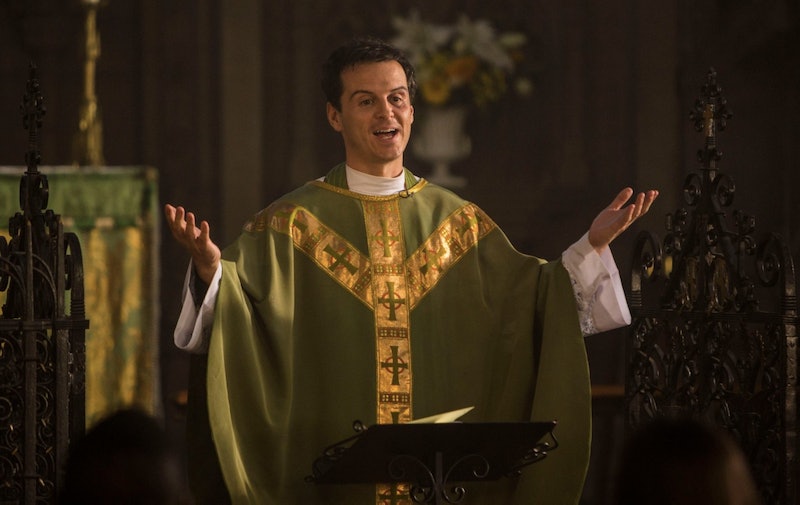 A Fleabag book may be on the horizon, but the TV series is well and truly over. (Weep). But its illustrious creator, Phoebe Waller-Bridge, has revealed what the Hot Priest might have said this Christmas.

Appearing on BBC Radio 4's Today show, Waller-Bridge burst out laughing when first asked to relay the famed character's Christmas message, admitting she "was not expecting that at all." But she soon got into the festive spirit, saying that the Hot Priest would "probably wish everyone a happy G&T." Truly iconic.

Waller-Bridge wasn't finished though. She continued: "I think he'd probably give some beautiful advice like take a moment with someone who you wouldn't normally take a moment with, which I suppose he did with Fleabag. So it might lead you down some challenging paths if you do that." But, she added, "he probably wouldn't be too religious about it. And I think he'd just say 'kneel' to be honest." Again, iconic.

If you're praying for a Christmas special, it's highly unlikely at this point in time. But bets are still on for a quick video of the Hot Priest (played by Andrew Scott), gin and tonic in hand, firmly telling his Christmas congregation to kneel.

With Fleabag: The Scriptures out Nov. 12, people are starting to reminisce about the ending of one of the best series ever. Involving both Scott and Waller-Bridge, the scene sees Fleabag being gently turned down by the priest.

Waller-Bridge has already admitted that Scott was the one to push for the priest to say "I love you too." Originally, Waller-Bridge wasn't sure if he should reciprocate Fleabag's feelings or simply say, "It will pass," when she expressed her love for him. Speaking on Elizabeth Day's How To Fail podcast, the 34-year-old said: "Andrew came and he was like ‘I’m saying it.’ Basically, [he was] like I’m not giving you another option because I have to say it."

"You know when an actor feels that strongly about something, and they’re right?" she continued. "He was so right, and we have him to thank for that."

But it turns out a completely different ending may have been in the works. "There was an idea for an alternative ending, but I’ll never say what it was," the writer and actor recently told the Guardian. Here's hoping all will be revealed.