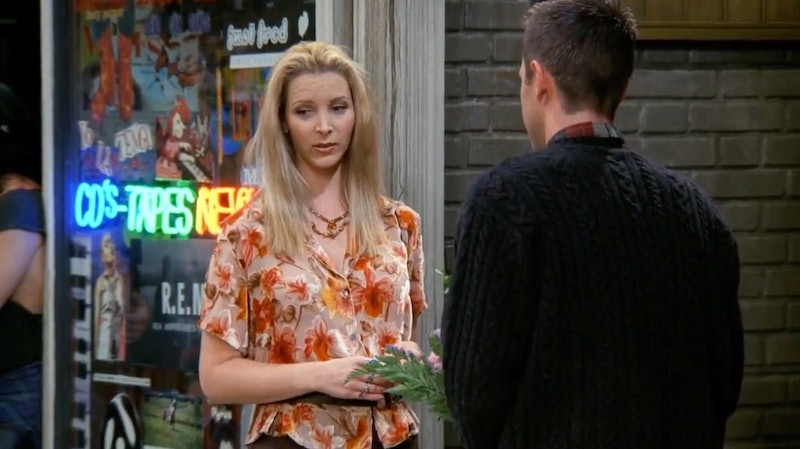 Twenty five years after Friends premiered, it's easy to forget some of the more ... questionable characters who appeared on the show to romance everyone's favorite group of friends. But while reflecting on the show, the Friends creators revealed they regret two of Phoebe's boyfriends — despite the fact that the character dated so many strange characters before finally finding love with Mike (Paul Rudd).

According to Vulture, showrunners Marta Kauffman and David Crane reflected on the iconic sitcom at the 25th anniversary panel at the Tribeca TV Festival on Friday, and shared that there are some plot lines that didn't quite hold up, two and a half decades later. The first one that Kauffman and Crane brought up was in Season 3, when Phoebe (Lisa Kudrow) began dating Malcolm (played by David Arquette) in order to stop him from stalking her twin sister, Ursula.

"We did a lot of re-writing of that to make it work," Kauffman explained. Of course, once Phoebe discovered that Malcolm couldn't let go of his stalking ways, things didn't work out for the couple, and it's easy to see how that storyline might be a little less amusing in 2019, especially since stalking is an actual crime. In recent years, stars like Taylor Swift and Kendall Jenner have gone to court to testify against stalkers and have employed drastic measures to protect their privacy, which has brought the issue more to the forefront of people's minds.

The other storyline the pair regret also involves one of Phoebe's boyfriends: specifically, Ryan (played by Charlie Sheen), the Navy commander who hooks up with Phoebe once a year. When he appears on the show, he has chicken pox, which ruins the pair's romantic plans, and Kauffman admitted that "I’m not sure the chicken pox worked either."

The curse of strange and questionable boyfriends even affected some of Phoebe's more memorable and recurring love interests — like Gary the cop, played by Michael David Rapaport, who seemed to be a normal, nice guy at first, convinces Phoebe to move in with him way too quickly and then shoots a bird for chirping too loudly. And let's not forget about David the Scientist (Hank Azaria), who seemed to be Phoebe's perfect match, but ultimately became a mess who failed out of his research project in Minsk.

With all of those wacky plot lines and love interests in Phoebe's past, it makes sense that Kudrow struggled at times to play the quirkiest Friend. During a recent appearance on Kevin Nealon's YouTube series, Hiking With Kevin, the actor admitted that she had a hard time playing Phoebe after the first few years on the show.

After Nealon asked if Kudrow had ever played a character like Phoebe before, she admitted that "I had played dumb girls, sure, but it wasn’t really me," and that difference between herself and her character began taking a toll. "I feel like, 'Sh*t, I tricked 'em at the audition. I was the only one who could cope with the audition process and that’s how I got it,' I think," Kudrow said. "So I had to work hard at being Phoebe. And then, like, third season in, I was struggling so much."

Ultimately, Kudrow revealed that it was Matt LeBlanc who helped her out of her slump, after he noticed that she was having a hard time on set. "He went, 'You're her. Relax. You got it. You’ve been doing this f*ck*ng character for three years,'" she told Nealon. "'You’re working too hard. That’s your problem. You don’t need to work as hard. Relax.' [And] he was right!"

While Phoebe may have had some of Friends' most questionable love interests and strangest plot lines, it's clear that even 25 years after audiences first met her, Kudrow's "flaky" character still has a place in Friends fans' hearts.

More like this
The Banned 'Friends' Ad Shows Monica As You’ve Never Seen Her Before
By Sam Ramsden
This 'Gossip Girl' Wardrobe Error Has Gone Viral On TikTok
By Alyssa Lapid
Ashton Kutcher Wants Danny Masterson “To Be Found Innocent” In Rape Retrial
By Jake Viswanath
'Abbott Elementary' Fans Probably Missed This 'Parent Trap' Easter Egg
By Sam Ramsden
Get Even More From Bustle — Sign Up For The Newsletter
From hair trends to relationship advice, our daily newsletter has everything you need to sound like a person who’s on TikTok, even if you aren’t.