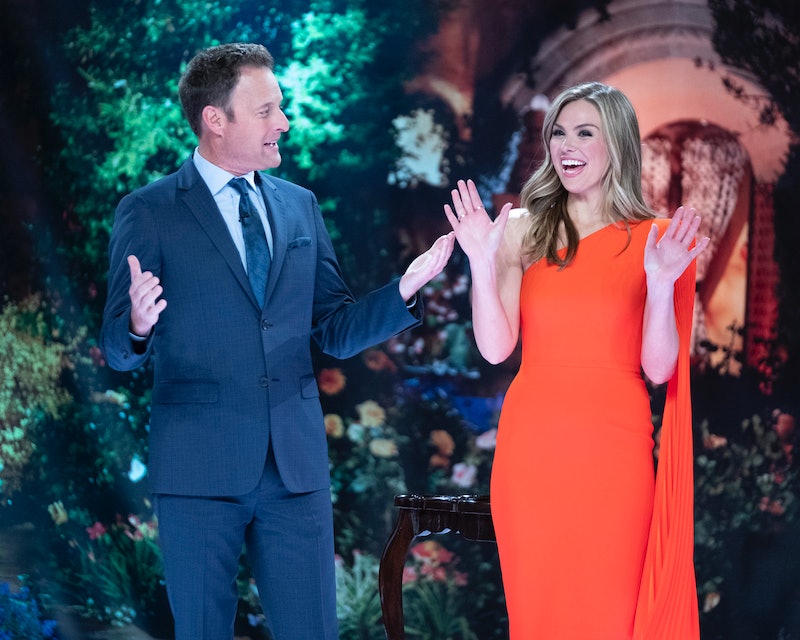 After watching Colton Underwood's season of The Bachelor every week, it's hard not to feel lost without some new content on Mondays. Thankfully, franchise creator Mike Fleiss shared a first look at Hannah Brown's Bachelorette season. Actually, he shared a few photos from the start of filming. On March 18, he showed fans her long gown from the first night at the Bachelor mansion, simply captioned, "Wow," which is concise, yet very accurate. She killed it in her sparkly gown. Bachelorette host Chris Harrison also posted the same photo on his own personal Instagram account on March 18.

Hannah has been isolated from the world and phone-free since her season started filming, but she did make an appearance on The Ellen DeGeneres Show that aired on March 18. She told the talk show host, “My journey on The Bachelor was interesting. I definitely grew but had ups and downs."

She even admitted that she didn't think she would end up as the Bachelorette. Hannah said, "There are moments that I did not think this would happen. But I think the reason I am here is because I am real, I showed every part of myself.” And that is exactly why fans love her so much.

Unfortunately, Fleiss didn't leak any spoilers when he shared-behind-the-scenes photos, but at this point, fans will take any Bachelorette content they can get. And at least the viewers got to meet five of Hannah's suitors during the After the Final Rose special at the conclusion of Colton's Bachelor season on March 12.

Not only that, but the official Bachelorette Facebook page shared an album full of photos of potential contestants for Hannah's season. However, it's not clear if all of these guys will definitely appear on the season, because the vague caption described it as an "early look at the men who may be on."

While it's unclear which men will actually be on Hannah's season for sure, Fleiss did share a look at Hannah's first group date as the lead. It looks like they're in a theater, which is a go-to location for early season dates. Will the contestants end up taking the stage for a performance? There's no chance that they're just patrons at another show without stepping into the spotlight themselves, right?

Of course, Hannah became the Bachelorette after she dated Colton on his season. And while they did not end up together, the beauty pageant alum has no hard feelings. In a March 13 interview, Hannah told People,

"I’m happy for Colton. He was able to choose somebody and it wasn’t me, and that’s okay. I’ve moved on. And I’m excited to find my person.”

Even if Hannah didn't get the Bachelorette role, she really did leave Colton's season in a much better place than when she started. In that same interview, she shared, "I didn’t end up with Colton, but I ended up loving myself more."

And, ultimately, that experience helped her become the person that she wants to be and she's so ready to be Bachelorette. Hannah told People, "I came into that show as someone who wasn’t as open as I am now. I was terrified to be my true self because I felt that it wasn’t enough. But I allowed myself to break down those walls."

Even though fans don't know much about Hannah's season so far, it's still super exciting to get a glimpse at her outfit, her group date location, and how she felt taking on the Bachelorette role.