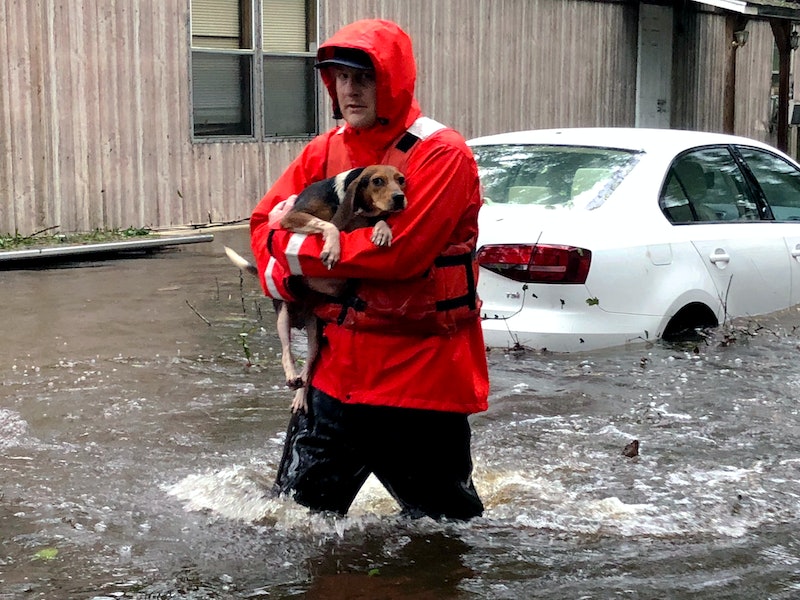 Though the chaos in the Carolinas has calmed, the magnitude of its impact is only starting to take shape. Photos from Hurricane Florence show just how devastating the storm has been so far, and it's expected to get worse as the death toll and floodwaters keep rising. The hurricane quickly downgraded once it hit shore, but it left a trail of deaths in its wake; as of Monday afternoon, The Associated Press reported that 31 people have been killed while hundreds are trapped by the flooding.

And while the skies are clear, the Carolinas still have to brace for even more disaster. The flood waters are expected to rise as runoff from higher elevation flows down. "This is a monumental disaster for our state," North Carolina Gov. Roy Cooper said Monday, according to CNN. "This is an epic storm that is still continuing because the rivers are still rising."

Florence, now a tropical depression, is expected to leave up to five more inches of rain across North Carolina, according to CNN. Photos taken across the disaster areas show the extent of loss and suffering from the storm. On Monday, people lined up to collect ice at the Rose Ice and Coal Company in Wilmington, North Carolina, according to Getty. Most of the city has been in the dark for days, after losing power when Hurricane Florence hit the area.

The photo below, taken on Monday, captured the severity of the flooding, with water nearly swallowing a home in Spring Lake, North Carolina. The flooding came from the Little River, Getty noted, a nearby river that saw its banks overflow onto the surrounding region.

In the same city, one man was captured carrying an elderly woman out of her home. According to Getty, Bob Richling carried Iris Darden as the water from the Little River began to creep into her home on Monday.

In New Bern, North Carolina, the ferocious strength of the storm forced a boat into the side of a car garage. According to Getty, a boat was carried there by the high winds and storm surge along the Neuse River over the weekend. Winds reached speeds of nearly 200 miles during the course of the storm.

While the storm brought the worst, the devastation brought out the best in North Carolinians. As New Bern saw some of the worst initial disaster on Friday, volunteers brought their own boats to help trapped residents. In the picture below, according to Getty, a volunteer is helping to rescue two men and a dog from the floodwaters.

In Kinston, North Carolina, the line between neighbor and family blurred. Here, 83-year-old George Skinner is being comforted by his neighbor Mary Ann Dunn after both of their homes were damaged by floodwaters from the Neuse River, Getty reported. Hurricane Florence isn't the first time Skinner's home has flooded; since the creek behind his house first saw its banks flood during Hurricane Floyd in 1999, Skinner said each succeeding storm has brought worse flooding, according to Getty.

Here, as his loved ones help save what's salvageable in his home, Skinner holds frames of old family photographs over an air rifle in his lap. Getty reported that Skinner has said, in the wake of Florence, his entire family plans on gathering everything they can salvage and leaving permanently.

As residents did what they could to save their homes, rescue workers were out in full force. According to Getty, in the photo below, taken in Bolivia, North Carolina, Boone County Fire Rescue team members are checking the flooded home for people who may be trapped inside.

The water will continue to gush downstream as the week goes on, and the National Weather Service has said that the movement will lead to "catastrophic and historic river flooding" for days across affected parts of the Carolinas. If you'd like to help, here are a few ways.