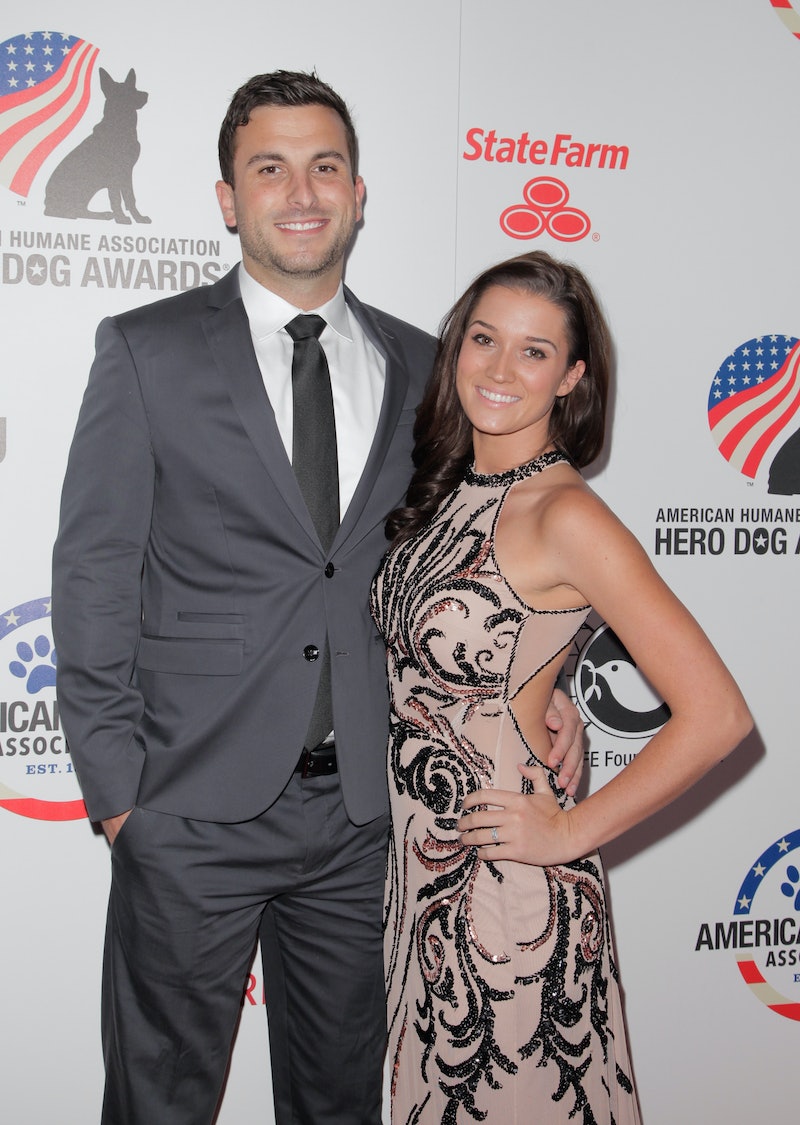 Even though Jade and Tanner Tolbert are done with reality TV, they've kept their fans updated on their lives thanks to social media. Recently, the Bachelor in Paradise alums found out they're having a baby boy. Beyond sharing the baby's sex, Jade and Tanner posted photos from the reveal party, capturing the moment they found out the big news. And, of course, the pictures are just as adorable as everyone expected.

In the images taken by Nikki Ryan Photography and McCall Media Management, Jade, Tanner, and their daughter Emmy are surrounded by supportive friends with silly string. When they sprayed the silly string, it came out blue, which symbolized the baby boy on the way. Jade and Tanner looked elated in all of the photos, but little Emmy didn't seem to be super into the celebration, based on her facial expression. (Most likely, she just didn't know what was going on and the cameras happened to catch her at an awkward moment.)

Nevertheless, the soon-to-be parents of two were pumped about the news. Tanner made it clear that he really wanted a baby boy by wearing an all-blue outfit. Meanwhile, Jade wore a pink sweater to represent #TeamGirl. Fans may not get to watch the Tolberts on TV, but the photos from their party captured so much excitement that it feels like everyone got to be a part of the big moment anyway.

They Dressed The Part

While Jade and Tanner took a more definitive stance with their outfit choices, Emmy played it safe by rocking a look that included both pink and blue. The only thing she didn't have on this photo was a smile, but maybe she just needed a nap break.

Tanner Even Color-Coordinated His Underwear

Yes, Tanner even wore blue underwear. He really did want that baby boy! The reveal wasn't the first time that Tanner made it clear that he wanted to add a baby boy to the family. In an April 2018 interview with Us Weekly, Tanner shared, "I’m going to keep trying until we have a boy." Well, they will have one soon.

Emmy Was Not Into The News

Jade and Tanner had the biggest smiles as the silly string hit them. Unfortunately, the same can't be said for Emmy. Maybe she just felt left out because Tanner was holding Jade instead? Or they were just screaming a little too loudly from all the excitement. No matter what Emmy was thinking, she has a great photo to share for the perfect #ThrowbackThursday post when she gets older.

It had to be a confusing situation for the future big sister. No one could blame her for not smiling the whole time. One of her parents even joked about this in a caption from Emmy's Instagram page, writing, "That moment when you find out you are gonna have a little brother."

The Unborn Baby Even Posted About The Event

Yes, the unborn Tolbert child is already an Instagram influencer. The baby has more 66K followers and no one even knows him yet. That is so impressive.

Bachelor in Paradise fans have loved following Jade and Tanner's lives throughout the years, and now they get to keep up with the tiniest Tolbert of all. There's still so much more excitement to come: Jade will (probably) have a baby shower, then the baby will be born, and they will reveal his name. Soon enough, they'll be sharing his childhood milestones on Instagram. And before you know it, he'll be stepping out of the limo on the hosed-down driveway outside of the Bachelor mansion ready for roses — well, maybe. Either way, he's already many steps ahead with the social media influencing.