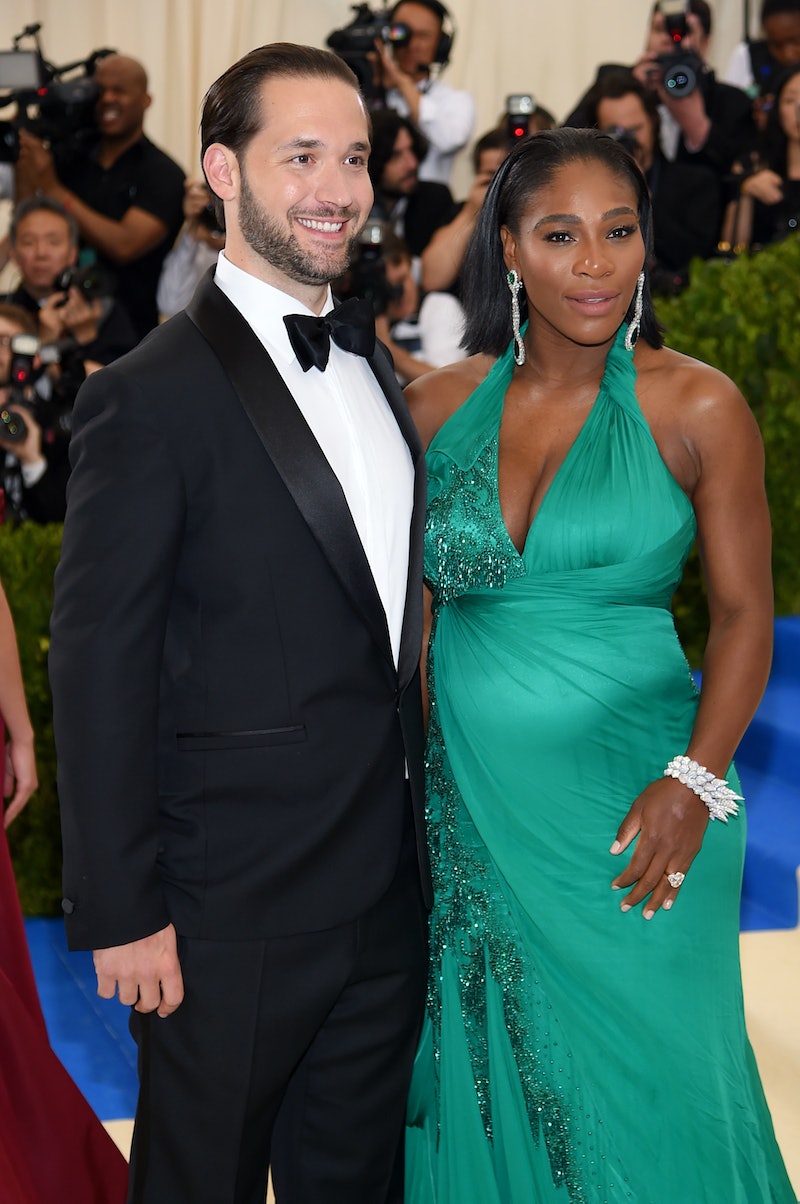 It was a tale as old as time when Serena Williams and Alexis Ohanian wed on Nov. 16. According to Vogue, the tennis champion and founder of Reddit had a Beauty and the Beast-themed wedding, and the stunning photos from Serena Williams' wedding show off the fairytale evening in all of its opulent glory. The couple seemed to have had a dream wedding with their family, friends, 2-month-old daughter Alexis Olympia, and Williams' Yorkshire Terrier, Chip, all in attendance.

Williams and Ohanian reportedly met in Rome in 2015, and became engaged in 2016. Earlier this year, the couple welcomed their daughter into the world just a few months after Williams won the Australian Open. To say it's been a whirlwind few years for these two titans of their respective fields would be an understatement. Through it all, they've been each other's constants, and from the looks on their faces in their wedding photos, Williams and Ohanian are happily committing to being there for each other forever.

Vogue reported that the couple's star-studded New Orleans wedding featured guests including Beyoncé, Kim Kardashian, Kelly Rowland, Serena's sister Venus, and many more. While the iconic Disney film Beauty and the Beast inspired the decor (and the couple's first dance to "Tale as Old as Time"), the ceremony was also full of nods to Williams' career. Each table at the ceremony was named after one of Williams' 12 Grand Slam titles, and guests were given their tennis trophies as party favors, according to Vanity Fair. The magical evening was capped off by Ohanian proving he's a real prince. Williams' new husband surprised her with an actual working carousal to cap off the romantic event.

While nothing could ever top receiving an invite to Williams and Ohanian's bash, swooning over photos from their wedding is the next best thing.

Williams posed in her stunning wedding gown (one that Belle would totally approve of) alongside Ohanian and baby Alexis to create what may be a contender for the most perfect family portrait ever.

Williams Prepares For Her Walk Down The Aisle

If the bride-to-be was feeling any jitters, she wasn't showing them in her pre-wedding pictures.

Disney probably wishes they could create a wedding as picture perfect as Williams'. In case you were wondering, yes the archway with the yellow flowers was a nod to the Beauty and the Beast aesthetic — this couple knows how to keep things chic. Oh, and if you need any tips writing your vows in the future, then Ohanian is your man. The Independent reported that Ohanian told Williams,

"You are the greatest of all time, not just in sport. I'm talking about as a mother and as a wife. I am so excited to write so many more chapters of our fairy-tale together. And my whole life I didn’t even realize it, but I was waiting for this moment."

Emotional sobbing is totally allowed in this situation.

Not all of the guests can win a real Grand Slam, but at least they can hold a trophy now. And enjoy the wonders of a ceiling donut.

The Couple Came Ready To Dance

Just look at Williams' after-party shoes. Those sneakers are a work of art.

There's no doubt about it, this wedding party is spectacular. Even Chip (the dog, not the teacup) was included in the fun.

Dreams clearly do come true, because Williams got a carousal for her wedding. Is everyone sure Ohanian isn't an actual prince?

How cool was Williams' ceremony? It had an actual mini Destiny's Child reunion, that's how cool.

Venus Supports Her Sister In Style

Venus and Serena always have each other's back, and that will never change.

As beautiful as their wedding was, Williams and Ohanian's story is just beginning. From their photos, it seems clear these two are devoted to one another, and their big day is surely just the start of another amazing chapter for these two champions.

More like this
Ben Affleck Wrote A 12-Page-Long Speech For Wedding To Jennifer Lopez, Says Kevin Smith
By Brad Witter and Radhika Menon
Khloé Kardashian Is Reportedly Dating A Private Equity Investor She Met Through Kim
By Jordyn Tilchen and Jake Viswanath
Dixie D’Amelio & Noah Beck “Love Each Other” Despite Breakup Rumors
By Julia Emmanuele, Jordyn Tilchen and Grace Wehniainen
Hailey Bieber Reacts To Rumors She "Stole" Justin & *That* Selena Gomez Chant
By Radhika Menon
Get Even More From Bustle — Sign Up For The Newsletter