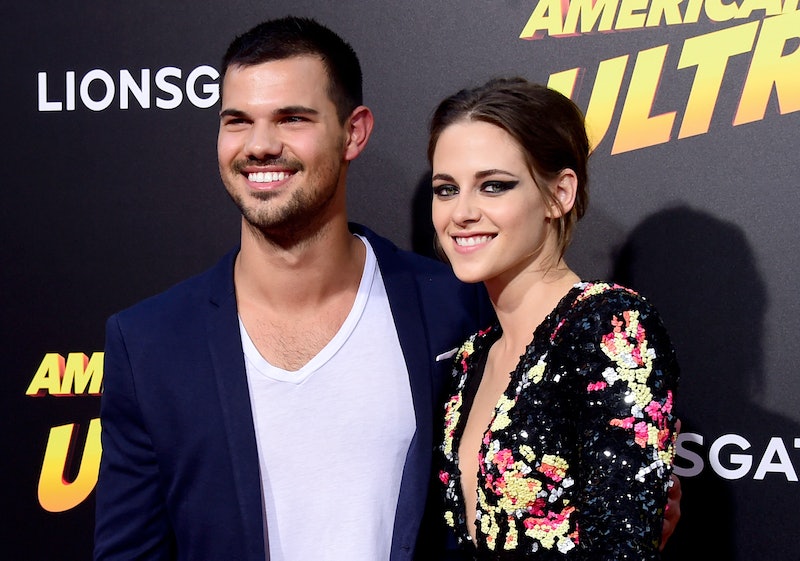 Alert! Alert! There was just a mini-Twilight reunion, so gather 'round, stat. Fans need to see these photos of Kristen Stewart at Taylor Lautner's birthday party from Tuesday. The actor who played Jacob Black in the 2008 film based on the books by Stephenie Meyer and hairstylist, CJ Romero, were both kind enough to share photos on Instagram on Tuesday.

Lautner, who turned 27 on Feb. 11, was thrown a surprise party by his girlfriend, Tay, and, yes, his Twilight costar was in attendance. As Twihards know, Stewart played lead Bella Swan in the franchise and clearly ever since filming, she and Lautner have remained close. Why else would she be invited to celebrate his birthday?

Next to a series of four images posted by Lautner, he wrote, "Thank you @taydome for the best birthday EVER. I’ve never been more surprised in my life."

If you scroll past the first two adorable photos of Lautner and Tay and the third in the Instagram below, you'll see the fourth picture features Stewart on the far left giving a thumbs up. She looks truly stoked to be at her friend's party.

As for Romero's photo, well, it's definitely going to make Twilight fans feel all kinds of emotions. Lautner stands in the middle with his finger over his lips like he's in the opening credits of Pretty Little Liars, as Romero pointed out. Stewart is on the actor's left looking all dramatic, while Romero cozies up on Lautner's other side.

The hairstylist's caption says it all. He wrote, "Damn K looks sexy. T is a pretty little liar. And I look like I’m ready for bed. #hbd @taylorlautner and mom in the back @lilykershaw."

This isn't the first time the two have gotten together somewhat recently. As reported by BuzzFeed in June 2017, Stewart and Lautner reunited at a Moschino afterparty in Los Angeles. Furthermore, and as you can see in the featured image at the top, Lautner had a cute red carpet moment with Stewart at the August 2015 premiere for her movie American Ultra. They even went to a Sam Smith concert in January 2015 together.

It's really no surprise these two have remained close after all these years. Lautner made it clear early on how much he respects and admires Stewart. In November 2012, he told The Hollywood Reporter that not only did the actors become close since the first Twilight movie, but he also dished, "Kristen is fantastic at everything she does. I’m always proud of her."

As you can probably imagine, Twihards can't help but rave about Stewart and Lautner's reunion at his surprise birthday party. One fan tweeted, "I love kristen and taylor’s friendship [crying emoji]." Another Twitter user shared, "I love how Kristen and Taylor are still so close after all of these years."

Finally, another fan gushed, "Taylor and Kristen have been friends since they were 16/17 years old, they grew up in the spotlight and still have a close friendship. Always supporting eachother. I couldn’t be happier about that. Beautiful people. thank you for bringing these two together 11 years ago @Twilight."

It truly is wonderful to see how genuine of a friendship Lautner and Stewart have over a decade later.