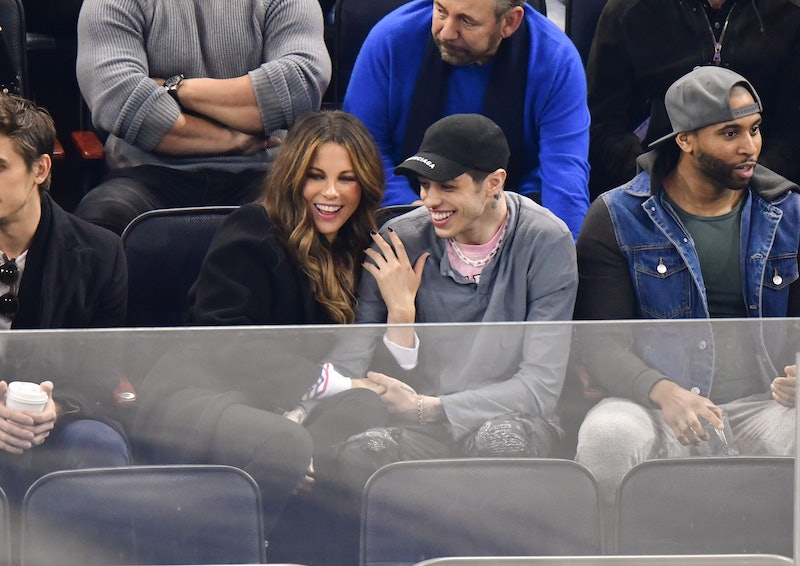 Kate Beckinsale and Pete Davidson may have thrown their hats into the ring for "Hottest New Celebrity Couple," based on their latest, PDA-heavy public outing. As all of the photos from Beckinsale and Davidson's PDA at a hockey game showcase, it seems like things may truly be heating up between the rumored couple.

Beckinsale and Davidson may have been on their outing with some celebrity pals, but their focus was totally on each other. On March 3, the twosome attended a New York Rangers game where they couldn't help but show off their red-hot chemistry together. Seated right next to Antoni Porowski of Queer Eye fame, the Underworld actor and the comedian, had a mini-makeout session during the game (by the way, if this isn't the most interesting little celebrity motley crew ever, I don't know what is).

When they weren't locking lips, the pair, who were all smiles, watched the game in a rather cuddly embrace. Despite this major case of PDA, it should be noted that Beckinsale and Davidson have not yet confirmed their official relationship status. But, when you're spotted publicly making out at a hockey game, it's a pretty clear sign that the pair are in a great place in their relationship (whether they're officially a couple or not).

The rumored couple's recent hockey game hangout came shortly after they had yet another get-together earlier in the weekend. According to E! News, Davidson and Beckinsale were seen leaving a Saturday Night Live afterparty while holding hands, on Saturday night, March 2. The publication reported that not only did they arrive at the party, held at a Dos Caminos Mexican restaurant, holding hands, but they also left the party holding hands.

Even though they had a very PDA-filled weekend, it could very well be that Davidson and Beckinsale are keeping things casual. In early February, a source told E! News,

"They spend most of their time on opposite coasts so it's a casual thing. The insider also told the publication that they get along so well because they just have a ton of fun, "But they are going to keep talking and having fun together."

They continued to reveal that Beckinsale "thinks he's [Davidson] the sweetest and nicest guy." The source also noted that some may think the possible couple are an "unlikely match," but that they just work so well together, "They may seem like an unlikely match but she thinks he's great and she just loves all the laughs she has with him." Hey, if they're getting along swimmingly and having a fun time together, then that's all that really matters, isn't it?

Davidson and Beckinsale first sparked romance rumors back in January when they were spotted getting cozy together during a Golden Globe Awards afterparty, according to Page Six. The publication reported, based on a supposed witness' account of the hangout, "They were being very flirty together, they were sitting very close on the outside patio seating. Kate had her hand on his knee, and she kept laughing at all his jokes.” Still, in light of those romance reports, neither Beckinsale nor Davidson commented on the rumors themselves. (Bustle previously reached out to reps for Davidson and Beckinsale for comment, but did not hear back.)

Even though they haven't commented on their official relationship status, based on their recent hockey game outing, it seems like the "Beckinson" ship may seriously be going strong.

More like this
Twitter Is Freaking Out Over Rihanna’s 2023 Super Bowl Halftime Show Announcement
By Stephanie Topacio Long
Pro Footballer Zander Murray Is "Blown Away" By Support After Coming Out
By Sam Ramsden
Jack Grealish’s Reaction To England’s New Kit Is The Most British Thing You’ll See Today
By Darshita Goyal
Dixie D’Amelio & Noah Beck “Love Each Other” Despite Breakup Rumors
By Julia Emmanuele, Jordyn Tilchen and Grace Wehniainen
Get Even More From Bustle — Sign Up For The Newsletter