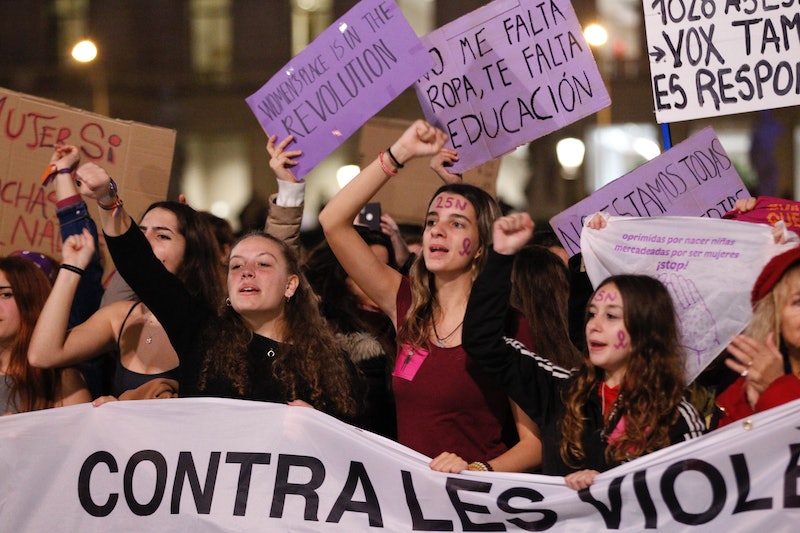 People around the world hit the streets on Nov. 25 to protest violence against women, as several governments recognized International Day for the Elimination of Violence Against Women. Thousands of activists gathered in countries including France, Italy, Turkey, and across Latin America to draw attention to the ways their countries are failing to address violence against women. While it's unclear exactly how many protesters participated worldwide, social media was filled with images of people rallying and hashtags supporting the cause in several languages.

International Day for the Elimination of Violence Against Women started in 1999 to commemorate the deaths of the Mirabal sisters, three Dominican women who were murdered after protesting dictator Rafael Trujillo, who was behind racist, large-scale attacks against Haitians in the Dominican Republic. The day brings awareness to the widespread violence against women in Latin America and across the world. According to the UN, 12 women in Latin America are murdered each day. The UN estimates that 87,000 women were murdered in 2017, with more than half killed by a partner or family member.

For Puerto Rico, these protests are especially timely. The island has a high rate of violence against women, and officials are allegedly doing a poor job keeping track of attacks. A joint report by anti-police brutality group Kilómetro Cero and feminist organization Proyecto Matria found that Puerto Rican police were underreporting murders of women by up to 27% between 2014 and 2018.

In addition, the U.S. territory's forensics office allegedly did not count some murders at all. As a result, it's impossible to know exactly how many Puerto Rican women have been murdered in recent years. This week, protesters marched on the governor's mansion to push for the declaration of a state of emergency in the wake of the high rate of killings.

Throughout Latin America, groups of women and other protesters wore black, covered their mouths with red or purple paint, and staged die-ins as resonant ways of raising awareness on the widespread issue of violence against women. The UN estimates that, globally, 35% of women have experienced physical or sexual violence.

In some locations, protests against violence against women took place despite security concerns and unrest due to ongoing protests. After several days of national strikes in Colombia, activists marching for the strike in Bogotá joined forces with those who gathered to protest femicide rates. Since the strike began, at least 130 civilian protesters have been injured and one has died.

In Mexico City, riot police lined the streets that protesters marched on. In some areas, heavy smoke surrounded protesters who held signs while wearing face masks. Ten women are murdered in Mexico each day, where law enforcement are only able to solve less than one in 10 of all murders, The New York Times reports.

Despite tension on the ground in some locations, International Day for the Elimination of Violence Against Women was trending on Monday as celebrities like Alyssa Milano and policymakers tweeted one of the day's hashtags, #orangetheworld. On Nov. 25 amid protests, French Prime Minister Edouard Philippe announced a commitment to train more police officers in handling cases of violence against women, and 1,000 new spaces in emergency shelters for women. Meanwhile, U.S. Senator Elizabeth Warren used the opportunity to push the Violence Against Women Reauthorization Act, a bill that lays out specific protections and resources for women victims of violence. She tweeted, "Let’s reaffirm our commitment to ensuring women & girls worldwide can live free from violence."

More like this
How To Fight For Reproductive Rights, Based On How Much Time You Have
By Courtney Young
17 Powerful Photos From March For Our Lives Protests Across The U.S.
By Michelle Toglia
34 Quotes That'll Inspire You On Juneteenth & Beyond
By Syeda Khaula Saad and Siena Gagliano
Windrush Victims Are Still Waiting For Compensation
By Sam Ramsden
Get Even More From Bustle — Sign Up For The Newsletter