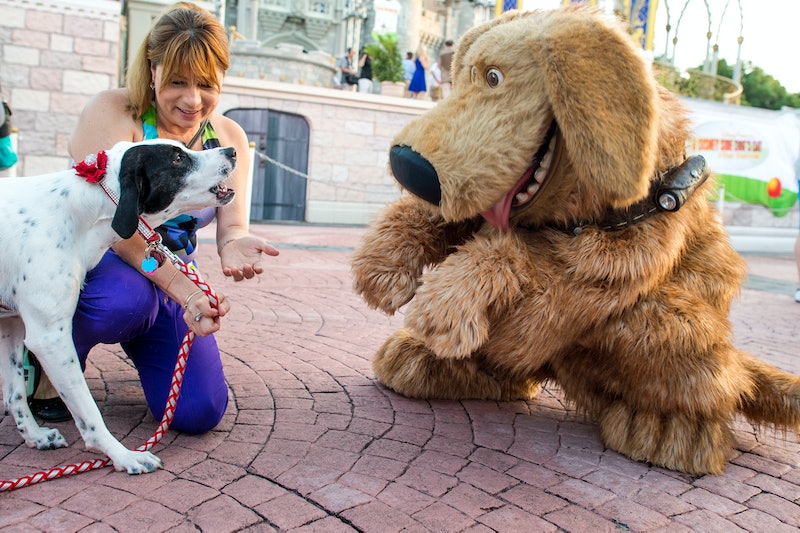 That's right: If you've been seeing those adorable photos of service dogs having a grand old time at Disneyland, what you're actually seeing is a (very cute) slice of their training for the service dog life. Just outside of the photos of the registered service pups were their trainers, who were there for a part-play/part-work training session with Canine Companions for Independence, a not-for-profit organization. CCI breeds and trains service dogs to be certified to work with people who are disabled and in need of canine assistance. The organization takes a field trip with their trainers and pups-in-training to create a great learning experience. I think anyone who has been there can attest to Disneyland being a busy place, so if a dog can maintain patience and attentiveness under those circumstances, they're pretty much ready for anything. The mix of a nonsensical grid system, humans wearing animal costumes, intense crowds and whimsical rides is just about as much exposure therapy as you can offer a dog. Once they've seen Disneyland, they've pretty much seen everything, amirite?

Of course, if they have a training session at Disneyland, the day is going to include some fun, too. I mean, how can you go to the happiest place on Earth and not leave some room for cuteness and fun? In addition to the intense training, the dogs got a chance to hang out and pose for pictures in Mickey Mouse ears, which are currently circulating on the internet, and breaking it — because duh. Can't you hear the "awwws" from here?

For lucky park-goers who were there on the same day as the field trip, the sight of the pups wearing costumes was just about the best added bonus you can imagine. And Disneyland is already amazing, so that says a lot.

Disneyland actually always permits service dogs to be at their parks. So long as the dog is a registered and certified service dog, wearing a harness, a leash, and is with their owner, they're allowed to be where their owner is. Even some rides that are deemed safe allow service dogs to ride them. The park also has kennels and daycare for park-goers with dogs that are not performing a service, making the park surprisingly dog-friendly. So while you might have a chance of running into a service dog at any given day that you go to the park, seeing a pack of service dogs wearing Mickey ears and posing for pictures with characters is definitely a rare occurrence, which is why it is still thriving on Twitter.

The special training day is one part of an extended training process that gets the dogs ready for public work with CCI. The combination of heat, distractions, unfamiliar noises, and faces (and characters!) creates a great learning experience for both the pups and their trainers. And while the dogs were not there for the general public, the mere sight of good dogs being very good dogs was enough to make everyone who ran in to them happy. Even though they couldn't pet the working dogs, joy spread throughout the park. And of course it also spread to Twitter, which I'm most thankful for. Because now we can live through the magic in adorable tweets.