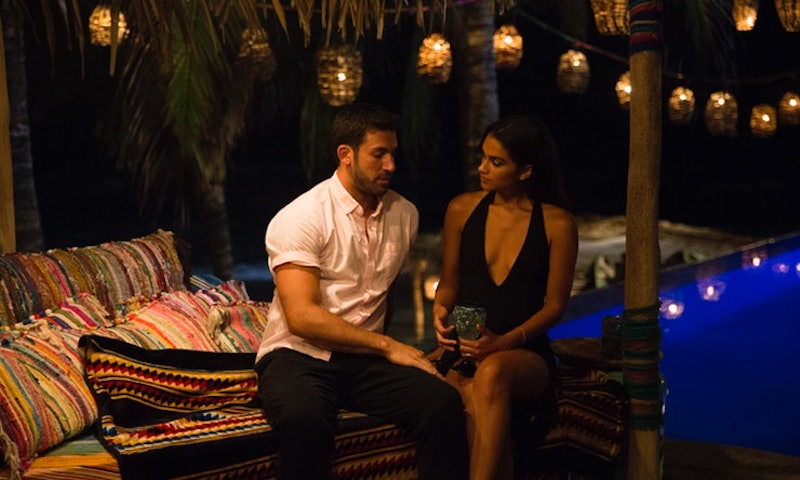 It looks like a three-day weekend isn't the only thing that Taylor Nolan and Derek Peth were celebrating on Friday night. The couple's recent engagement may not be confirmed, but they sure seem to be enjoying themselves with their friends. According to E! News, Taylor and Derek celebrated with their Bachelor in Paradise co-stars in Hollywood, which means that there's a good chance there's some truth to that rumor. Us Weekly originally reported that the BiP couple apparently got engaged during the aftershow that taped earlier this week. (When the news broke, Bustle reached out to Taylor and ABC for comment, but did not receive an immediate response.)

On Friday, Taylor shared several photos on Instagram from what looks like a fun night out at Hyde Sunset in Hollywood. The gallery, captioned "F A M I L Y," features several photos of Taylor happily posing alongside her castmates Raven Gates, Jasmine Goode, Alexis Waters, Dominique Alexis, DeMario Jackson and, of course, Derek. The photos don't give away too much, but the crew was definitely in good spirits, as they have good reason to be if those proposal rumor turns out to be true. Sure, Taylor isn't wearing an engagement ring in any of the photos, but that could obviously be their way of attempting to not spoil the surprise before the season finale.

Derek and Taylor's relationship blossomed on BiP right before production on the show was temporarily shut down back in June due to allegations of misconduct on set. The show resumed filming after an investigation concluded that there was no evidence of wrongdoing. And as it turns out, Derek and Taylor actually used their time away from set to build an even closer bond, under the impression that they wouldn't be able to return to Mexico to film. Derek revealed on an episode of The Ben & Ashley I Almost Famous podcast that, before production resumed, the two even made plans for Taylor to come visit him in his home state of Iowa.

Again, their engagement hasn't been confirmed just yet, and there's a good chance that the cast was simply just kicking off their Labor Day Weekend with a night on the town. Fans will have to wait until the Bachelor in Paradise aftershow airs to get the details on if and how the engagement took place, but for anyone who doesn't like waiting, these Instagram photos are yours for analyzing.