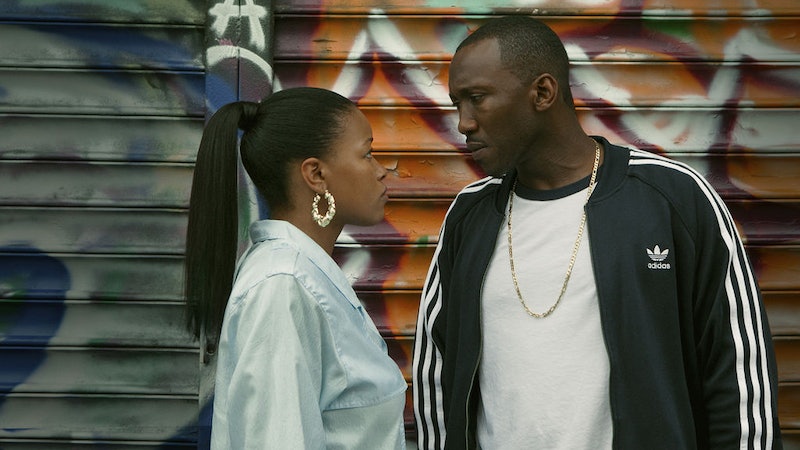 Over the past few years, hip hop biopics have become a go-to movie genre. The most successful so far was by far Straight Outta Compton, which chronicled the rise of NWA, but other recent films like the 2Pac-centric All Eyez on Me have also made a splash. One thing you'll notice about these films, though, is they have all been about men. That's changing with the new Netflix film Roxanne Roxanne, which tells the story of hip hop pioneer Roxanne Shanté. And photos of the real Roxanne Shanté prove that she is a legend worthy of her own movie.

For those not familiar, Shanté is a New York-based rapper who first rose to prominence in the 1980s during the early rise of hip hop. While still a teenager, Shanté established herself as one of the most-skilled rappers in the world at that time, with "Roxanne's Revenge," her response track to the hit U.T.F.O. song "Roxanne, Roxanne," becoming a monster hit for her when she was only 14. She quickly became one of the first female rappers to gain widespread fame and popularity, and went on to release three studio albums over her career: Bad Sister in 1989, The Bitch Is Back in 1992, and a greatest hits compilation in 1995. The film dramatizes her life, showing Shanté "as she hustled to provide for her family while defending herself from the dangers of the streets," according to Netflix's synopsis for the film.

In the movie, Shanté is played by newcomer Chanté Adams, who makes her film debut in the role. Although she's playing a 14-year-old in the film, Adams is actually a college graduate in her 20s. Here's a photo of Adams attending the film's premiere:

And here she is as Shanté in the film. As you can see, it's quite a difference:

Now, for comparative purposes, here's the real Roxanne Shanté, as a 17 or 18-year-old, holding her son Kareem in 1987:

Overall, the film appears to have done a pretty good job of making Adams look younger, and making her look more like the real Shanté did when she was a teenager. And frankly, the character in the film doesn't really look all that dissimilar to how Shanté looks today as a 48-year-old, as shown in the below pic, shared to Shanté Instagram account:

Shanté also attended the movie's premiere — she served as an executive producer on the film — and posed alongside her on-screen counterpart. Here, out of character, Adams looks far less like a dead-ringer for Shanté when the two are side by side:

Shanté's career peak occurred from the late 1980s to the early 1990s before she effectively retired from the industry in the mid-'90s, and she'll occasionally share photos from the time period on social media. The below photo features her alongside fellow hip hop legend MC Shan, which she dates to 1990:

On Shanté's Instagram, there are more period-specific shots of her when she was a young rapper, looking basically like her character does in Roxanne Roxanne. Although Shanté features a number of throwback pics on her Instagram, apparently fans want more. "Someone said Shanté why don’t we see a lot of pictures of you from the '80s?" the rapper wrote on her Instagram alongside one pic from the decade. "I said because in the '80s I was around Real MFs that didn’t like their pictures taken, not like this generation." In another throwback photo, Shanté hangs out with Will Smith, Biz Markie, and other rap icons on the set of the music video for Smith's 1999 single "So Fresh."

Photos of the real Shanté at various stages in her life show a true hip hop icon, one who is finally getting her due in Roxanne Roxanne.