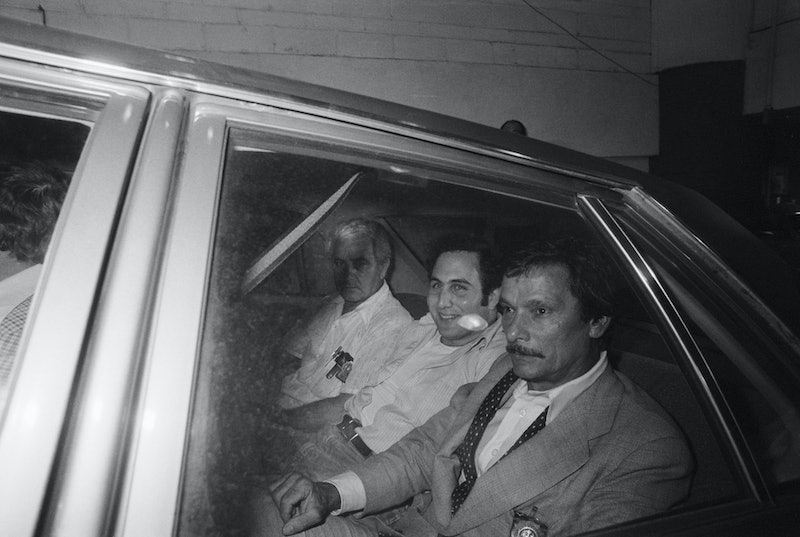 Heading into the fall season, Netflix is aiming to fill your true crime needs with the return of Mindhunter Season 2. Agents Holden Ford (Jonathan Groff) and Bill Tench (Holt McCallany) are back with an entirely whole new set of real life serial killer cases that deserve to be dissected. One such case they'll explore has to do with David Berkowitz, aka the .44 Caliber Killer, aka the Son of Sam. The real Son of Sam was a notorious serial killer in New York City, and his reign of terror was captured in numerous photos from 1976 to 1977.

On July 29, 1976, David Berkowitz approached Donna Lauria and her friend sitting in a car and shot them both without warning outside Lauria's Bronx home with a .44 caliber gun. Over the next year, six people would be killed and seven injured in a New York City shooting spree that caused Berkowitz to be dubbed the "Son of Sam," one of America's most infamous serial killers. (The name came from Berkowitz initially claiming he committed the murders because he was just following a demon's orders, which manifested in the form of a black dog that belonged to his neighbor, "Sam." He later backtracked and said that was just a hoax.)

Berkowitz was finally captured on Aug. 10, 1977. He admitted to all crimes and was sentenced to six consecutive life sentences; though he'll never walk free again, many will never forget the year they lived in fear. Here are the real life photos of the Son of Sam.

“When I entered the room on the 13th floor, I wanted to pick up Berkowitz and throw him out the window,” Sergeant Joseph Coffey, the New York detective who took down Son of Sam's official confession, told The New York Post in 2007. “But when he started talking about getting messages from a dog, I realized I was not dealing with a mob killer, but ... a sick man.”

The New York Times reports that Berkowitz was eventually found because detective James Justus was working his way through traffic tickets and he came across one in Berkowitz's name. Wheat Carr, the dispatcher in the area, revealed a key piece of information when Justus called to ask about the ticket: her father was named Sam, and Berkowitz was a neighbor who, at one point, shot their black dog.

So the police traced the license plate to an address, and waited for Berkowitz to come out. When he left the house and got into his car, detectives approached him. “You got me," Berkowitz told the detectives. “I’m the Son of Sam.”

History.com notes that after his arrest, Berkowitz appeared to enjoy the media attention he received, and even went so far as to sell his exclusive story rights to a publishing house. New York quickly realized how dangerous that was, and so the state created the first "Son of Sam law," which takes the proceeds a criminal earns from selling their story and gives them to a victims' compensation fund.

Since his arrest over 40 years ago, Berkowitz has reportedly turned over a new leaf. He became a born again Christian in jail, and has re-dubbed himself "the Son of Hope." The New York Times reports he even has a network of Christian friends on the outside, with some claiming they are best friends with Berkowitz. That's certainly a heel turn, left up to Mindhunter fans to unpack.