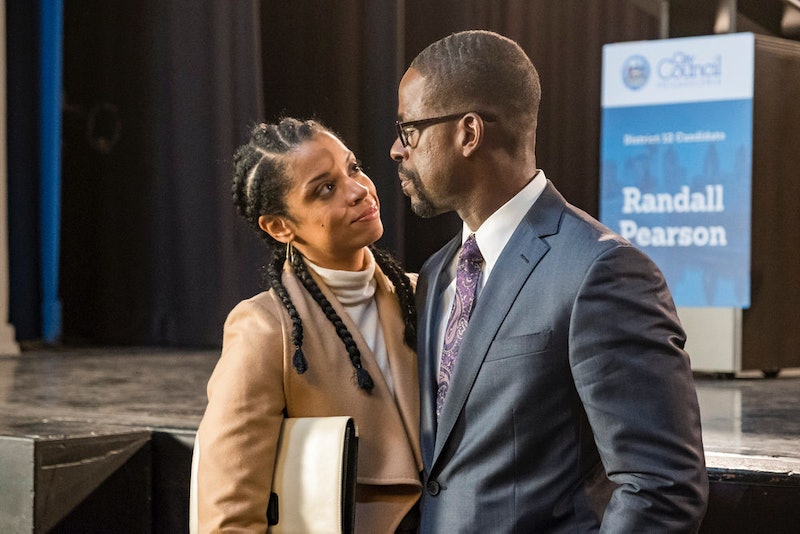 The most underrated character on This Is Us is arguably Randall Pearson's ride-or-die wife Beth. She may not be one of the beloved Pearson kids, but she has so much heart, a poignant way of delivering real talk, and on-point comedic timing. Luckily, TV vet Phylicia Rashad will play Beth's mom on This Is Us as Season 3 continues and her role will likely explain so much more about Beth (Susan Kelechi Watson), her past, and her motivations.

Rashad will join the cast as Beth, guest starring in the second half of Season 3, according to Entertainment Weekly. No stranger to playing a TV mom, the actor scored multiple Emmy nominations for her iconic role as Clair Huxtable on The Cosby Show. Beth fans will also be thrilled to learn that Rashad will appear in an episode that's specifically dedicated to Beth and telling some of her backstory. As audiences have learned a bit more about Watson's character, especially with the edition of her cousin Zoe (who's romantically tied to Beth's brother-in-law Kevin), a backstory is long overdue.

And because the state of Beth and Randall's (Sterling K. Brown) fan-favorite marriage is still a mystery to audiences after a big Season 3 twist, the addition of Beth's mom could indicate where Beth has been and where she's headed.

Because Beth is such a badass, viewers are yearning to learn more about who she is as an individual. For the first two seasons of the drama, Beth and Randall's solid marriage gave fans one relationship goal after the next. But as a unit, the two seem to be entering uncertain territory heading into Season 3's second half. In the present timeline, Beth and Randall experience complications over Randall's run in the Philadelphia City Council race. She asked him to bow out because of his poor poll results and the strain the campaign was having on their family and finances. But when he denied her ask, he ended up sleeping on the couch.

In a future timeline, audiences saw an older Randall and his daughter Tess visiting "her" (who we learned is Mandy Moore's Rebecca), but without Beth. By the looks of the flash-forward, Beth and Randall are seemingly not together and she tells Tess she'll visit Rebecca despite not speaking to Randall. Additionally, the two have experienced ups and downs with their kids, including a beautiful, emotionally-charged scene of Tess (Eris Baker) coming out and Deja's (Lyric Ross) reunion with her mom.

An entire upcoming episode dedicated to Beth indicates that viewers will (hopefully) get answers to many unresolved questions. In a recent interview with E!, Watson teased what's ahead. "It's a little rough right now... It's our job to portray marriage, kind of the way it happens and so we want to be true to that. We want to give them the journey that they deserve," she said.

Maybe Carol will step in to offer Beth support and life advice to help inform her choices moving forward? Maybe the episode will flash back to Beth and Randall's wedding? Whatever pans out, Tony award-winning actor Rashad will add so much value to the story.