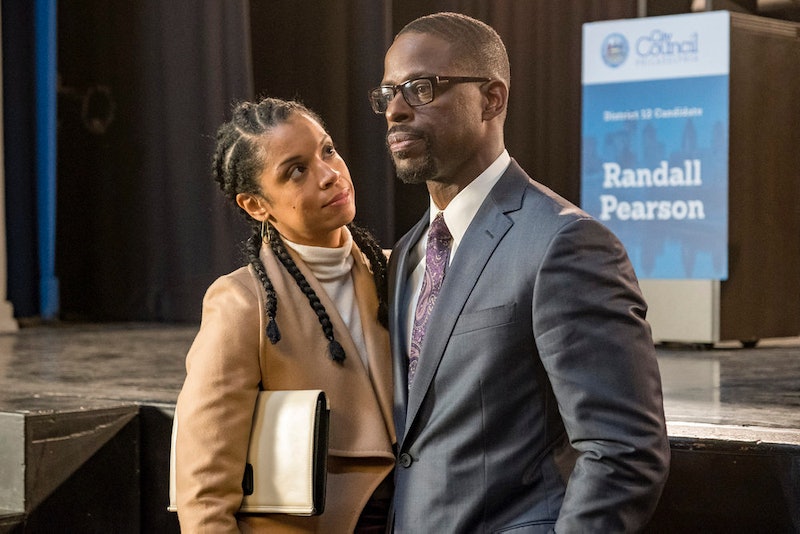 It's no secret that This Is Us loves to tug at its viewers' heartstrings, but during the recent midseason finale, the show messed with something that's downright sacred — Beth and Randall's marriage. The Season 3 fall finale left Randall sleeping on the couch and fans worried that the couple might be divorced in the future. In a new interview with E! Online, Susan Kelechi Watson revealed that things are going to be getting worse for the beloved couple before they get better... that is, if things get better at all.

Apologies to anyone hoping that Randall's night on the couch would be a one time thing. The problems that he and Beth are facing are going to take more than one night to solve, according to Kelechi Watson. The actor told E!,

"It's a little rough right now. It's our job to portray marriage, kind of the way it happens and so we want to be true to that. We want to give them the journey that they deserve. I think if we stayed in a very comfortable place it was be nice and sort of ideal, but not real. So, yeah, we're going there. All the way there. Sorry. I know we stress people out."

Kelechi Watson makes a good point. No relationship, no matter how solid it is, is easy all the time. Randall and Beth's marriage is no exception. Besides, the show has earned this storyline by laying the groundwork over the course of three seasons.

Beth has nurtured Randall's dreams and stood by him on quite a few journeys since this show began. Now she's at a turning point in her career, and their kids are all going through some big life changes as well. She needs Randall to take his turn being the family's rock for a bit, but his desire to help William's old neighborhood is clashing with the day-to-day needs of his wife and children. The show needs to explore where this rough patch takes them, even if its hard to watch.

Even though Randall and Beth are in an emotionally rocky place right now, that doesn't mean they're no longer together in the future — no matter how much that flash-forward seemed to hint they're apart. Series creator Dan Fogelman told Entertainment Weekly in a Nov. 27 interview, "Whether they come out on the other side, it would ruin the fun to spoil it one way or the other. But I would never put money against Randall and Beth, as a betting man."

That's sound advice for the fans, as well. Just because Randall asked Tess to call her mom about the Pin the Tail on the Donkey game that doesn't mean this election storyline is the beginning of the end for them. As a couple, these two have weathered their fair share of storms. And sure, this particular fight is pointing toward the two of them needing to have some serious discussions about their relationship and the work they need to put into it to get back on track, but that doesn't mean either one of them is just going to give up.

Never forget that even Rebecca and Jack spent a few nights apart. No marriage works all the time, and Randall and Beth's is no exception. They're still one of TV's best couples, and there are plenty of reasons to believe they'll come out on the other side of this storyline stronger than ever before.